I know that a lot of us have been pretty distressed by the people who have successfully been elected or appointed to positions in the federal government.  (Hell, the state governments, too, given that nearly half of voters in Alabama voted for an ultra-right-wing alleged pedophile who was removed as the state's Chief Justice for failing to follow the law, and thinks the bible should replace the Constitution.  Oh, and that only the first ten Amendments should count, thereby legalizing slavery and disenfranchising everyone but white Christian males.  I could go on and on.)

So the situation is discouraging, to say the least.  But I have good news for you, apropos of the 2020 presidential election:

Andrew Basiago has thrown his hat into the ring.

Basiago is one of those people who looks perfectly sane.  I mean, check out his official election campaign photograph: 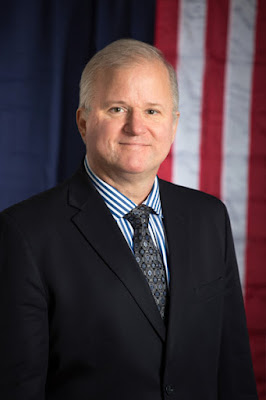 He looks like the kind of guy you could immediately trust, right?  Basiago is a Seattle lawyer, but if you recognize his name, it's probably not because of his law practice.

If you're a long-time reader of Skeptophilia, the name will ring a bell because he's been something of a frequent flyer here.  Back in 2012, he claimed that he and President Obama had participated in "Mars training classes" in the early 1980s, and that shortly thereafter he ran into Obama on Mars.  Oh, and they got there by teleporting.  Later that year, he informed the public that not only had he teleported, he was able to time travel, and in fact had zoomed back to the 1860s so he could hear President Lincoln deliver the Gettysburg Address.  He stuck around until 1865 so he could see Lincoln get shot in Ford's Theater, which must have been pretty upsetting.

The following year, Basiago teamed up with noted wingnut Alfred Lambremont Webre to issue a dire prediction: the planet Nibiru, which makes more unscheduled public appearances than Kim Kardashian, was going to make a near pass of the Earth in the summer of 2013, causing "electrical discharges" which would fry most of humanity.  He knew this, he said, because he'd developed a tool called a "chronovisor" which allowed him to see into the future.

Well, I lived through 2013, and I don't remember any electrical discharges.  Sounds like his "chronovisor" needs recalibration.

So this guy is going to run for president.

Basiago says he's going to run on the platform of putting money into developing better time travel and teleportation technology.  There's already such a program in place (obviously, since he says he's used it), called "Project Pegasus," and he's not only going to fund it, he's going to reveal its marvels and secrets to the general public.

If he's elected, that is.  If not, I guess it'll be "fuck everybody" and he'll be back to his law practice in Seattle and writing articles about Martians for Before It's News.

Me, I'm all for him.  We've proven already that America is resilient enough to survive for a year under the questionable leadership of a man who is either demented or insane, so I'm sure we could make it for four years with a president who claims to have been to Mars.  His press release sounds so... normal:


Today, Andrew D. Basiago is running for President of the United States with a New Agenda for a New America. He has vowed that if elected President, he will lead the American people into a bold, new era of Truth, Reform, and Innovation as great as they are great. Join us in supporting Andy in his quest to establish a Presidency as honest, just, and ingenious as the American people.

Which is easily saner than any of Donald Trump's tweets.

So my general view is: "Basiago 2020!"  At least we could be sure that NASA wouldn't be defunded.  And consider some of the other people who've run for president, and the one who actually won the office.  We could do a hell of a lot worse.
Posted by Gordon Bonnet at 2:35 AM