A couple of weeks ago, the New York Times had an article about claims of a decades-long investigation by the Pentagon of the UFO phenomenon.  While I don't doubt that such a program exists, the article claims that there are warehouses full of "alien alloys" that have been declared unanalyzable.

The conclusion, of course, can only be that they came from outer space.


Under [NASA employee Robert] Bigelow’s direction, [Bigelow Aerospace Company] modified buildings in Las Vegas for the storage of metal alloys and other materials that [military intelligence expert Luis] Elizondo and program contractors said had been recovered from unidentified aerial phenomena.  Researchers also studied people who said they had experienced physical effects from encounters with the objects and examined them for any physiological changes...

“We’re sort of in the position of what would happen if you gave Leonardo da Vinci a garage-door opener,” said Harold E. Puthoff, an engineer who has conducted research on extrasensory perception for the C.I.A. and later worked as a contractor for the program.  “First of all, he’d try to figure out what is this plastic stuff.  He wouldn’t know anything about the electromagnetic signals involved or its function.”

I have two responses to this.

First, we are way beyond da Vinci in our understanding of the universe and in the development of technology to study it; this is a serious false analogy.  Second, once you claim that there are actual artifacts to study, you've moved beyond the realm of anecdote into something that's scientifically verifiable.  At that point, you better have the goods -- and be willing to admit it if it turns out that the answer isn't what you hoped it would be.

The week after the article went public, Scientific American's Rafi Letzter wrote a response to it, saying much the same thing (although in far greater detail).  Letzter writes:


"I don't think it's plausible that there's any alloys that we can't identify," Richard Sachleben, a retired chemist and member of the American Chemical Society's panel of experts, told Live Science.  "My opinion? That's quite impossible."

Alloys are mixtures of different kinds of elemental metals.  They're very common - in fact, Sachleben said, they're more common on Earth than pure elemental metals are - and very well understood.  Brass is an alloy.  So is steel.  Even most naturally occurring gold on Earth is an alloy made up of elemental gold mixed with other metals, like silver or copper...

"There are databases of all known phases [of metal], including alloys," May Nyman, a professor in the Oregon State University Department of Chemistry, told Live Science.  Those databases include straightforward techniques for identifying metal alloys.  If an unknown alloy appeared, Nyman said it would be relatively simple to figure out what it was made of.

Well, as we've seen over and over, the woo-woos are nothing if not persistent.  Just a couple of days ago, a response to the response appeared over at Mysterious Universe.  The gist of the article is "there are too alien artifacts and UFOs," but there was one bit of it that stood out from the rest.  The author of the article, Brett Tingley, writes:


While I’m sure that's true enough of everything we’ve found on our planet, I just have to wonder: given the vastness of the universe, is it actually impossible for unknown elements or alloys to exist?  Seven new elements have been discovered here on Earth in the last thirty years, while the majority have been discovered in the last four hundred.  On a long enough timeline, who knows what tomorrow’s science will uncover?

This is a roundabout example of the Argument from Ignorance: we don't know, so the explanation must be _________ (fill in the blank with your favorite loopy claim, paranormal phenomenon, or deity).  Normally, the Argument from Ignorance is hard to counter except to point out that our ignorance of something isn't indicative of anything but our ignorance; you can't use it to prove anything.  But wound up in here is an interesting bit that we can analyze from a scientific perspective; the claim that there could be undiscovered elements in "the vastness of the universe."

Here's the problem.  Mendeleev constructed the first periodic table of the elements by noticing some odd patterns -- that there were groups of elements that had similar chemical properties.  After some years of messing about to figure out what was going on, he was able to construct a grid that placed these elements into columns and rows.  And, most interestingly, there were holes -- places in the grid that there should be an element, but none had thus far been discovered.

And one by one, those holes were filled.  Then advances in nuclear physics allowed the creation of the transuranic elements -- the ones beyond uranium, atomic number 92, which are short-lived radioactive substances that do not occur naturally (any of them created by the supernovae that gave rise to the elements in the Solar System would long ago have decayed away).  We're now up to element 118, oganesson. 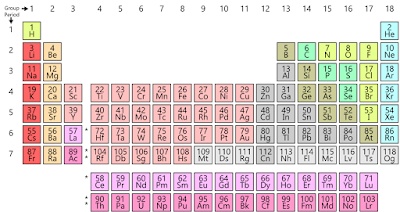 So Tingley is right that there have been new elements discovered in the last thirty years.  The problem is that most of them have extremely short half-lives and are highly radioactive, so the idea that UFO debris could be made of any of these newly discovered (newly created, really) elements is ridiculous.  But how about the other piece of his claim, that there could be other stable elements we haven't discovered yet?

Sorry, but that doesn't work, either; the periodic table has no holes left to fill, as you can see on the above illustration.  We can be extremely confident that we've got 'em all, and the only additions will be at the unstable and short-lived upper end.  So despite Geordi LaForge on Star Trek: The Next Generation constantly blathering on about how the phaser beams can't damage the alien ship because it's made out of an alloy of the elements gorblimeyum and gobsmackite, this isn't really possible.

Thus our labeling of Star Trek as "fiction."

I'm pretty certain that if the metallurgists and chemists were to examine the warehouse full of debris, they'd find any metal fragments to be composed of plain old ordinary metallic elements.  Now, there could be some piece of alien technology in there -- Puthoff's "garage door opener" -- but my guess is that if there was such incontrovertible evidence of alien visitations, the scientists would know about it.

Sorry for raining on your parade, if you're a UFO enthusiast.  I get your angst.  I would like nothing better than to have proof of extraterrestrial intelligence (or, even better, extraterrestrial visits, because that would mean that the aliens had figured out how to manage travel across interstellar space).  But until we have more than talk about "mysterious alien alloys," I think we need to once again table this entire discussion.
Posted by Gordon Bonnet at 1:53 AM