A couple of days ago, a friend and loyal reader of Skeptophilia sent me a link, and asked, "What would an introvert make of this?"

He asked me for good reason.  I've been an introvert all my life, but it's only gotten more pronounced as I've aged.  I can be shy and socially awkward to the point of deer-in-the-headlights panic.  I go to parties, mostly on my (much more outgoing) wife's urging, but unless I know everyone there -- not that likely -- I'll be the guy with a glass of scotch in my hand, looking around for a dog to socialize with.  I've been known to spend an entire evening at a social gathering, and speak twice -- "Hi, thanks for inviting me," and "Thanks, it was great."

The upside: I'm a good listener.  But still.

In any case, the link was to a paper in the journal Current Opinion in Psychology called "Social Baseline Theory: The Social Regulation of Risk and Effort," by James A. Coan and David A. Sbarra, which makes an interesting claim; that humans are basically social animals, so if you want to see someone acting in the normal way -- his/her "social baseline" -- don't use the usual psychological norm of observation in solitude, see how (s)he behaves in a group.


According to [social baseline theory], the human brain assumes proximity to social resources—resources that comprise the intrinsically social environment to which it is adapted.  Put another way, the human brain expects access to relationships characterized by interdependence, shared goals, and joint attention.  Violations of this expectation increase cognitive and physiological effort as the brain perceives fewer available resources and prepares the body to either conserve or more heavily invest its own energy.  This increase in cognitive and physiological effort is frequently accompanied by distress, both acute and chronic, with all the negative sequelae for health and well being that implies.

The implications to psychological research, if this is true, are obvious.  Take, for example, how functional MRI research is generally conducted:


In functional magnetic resonance imaging (fMRI) research, a standard convention is to compare an experimental treatment to a “resting baseline” characterized by simply lying alone in the scanner.  This convention is predicated on the reasonable assumption that experimental treatments present stimuli otherwise absent from the sensorium while participants are alone.  But inspection of brain activity in several studies... now suggests the brain responds to being alone as if sensory stimuli have been added, not taken away.  That is, the brain looks more “at rest” when social resources are obviously available.  This presents a puzzle potentially resolvable by considering proximity to a familiar other the brain’s true “baseline” state, and being alone as more like an experimental treatment—a context that adds perceived work for the brain to do.

Which certainly adds a layer of complication to studying the workings of the brain.

However, my friend's question is well taken.  Wouldn't there be considerable variation in this response, so much so that it wouldn't represent a baseline in any kind of general manner?  Taking myself as an example -- and other introverts I've talked to agree -- it requires far more energy to be with people than to be alone.  I love my family and friends, but I'm never completely relaxed when I'm around other people.  Interacting is work.  It's rewarding work, and the connections I've made to people are not something I'd ever want to give up, but it's definitely more taxing than being alone. 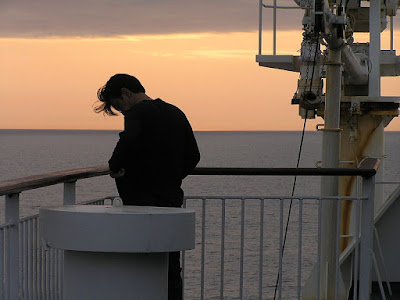 I notice this especially given my day job as a high school biology teacher.  My students are wonderful, and I definitely enjoy their energy and their interest, but being around them is simply exhausting for me.  At the end of the day, usually the last thing I want is to be around more people.  What I really want is to shut myself in my office, and put on some music, and relax.

Preferably with a dog and a glass of scotch.

So it's an intriguing idea, but I'm inclined to question its conclusions, at least as they apply to humanity as a whole.  I suppose it will always be hard to come up with any broad-brush generalizations with which to characterize the human mind.  Part of what makes us so interesting to each other is that no two of us reacts precisely the same way.

And now I must draw this to a close, because I've got to go to work.  First week back at school after a long break.  We'll see how it goes.  I don't have any other options, of course, given that I need the paycheck and it's a little early in the day to start drinking.
Posted by Gordon Bonnet at 2:05 AM