As further evidence that there is nothing so innocent and sweet that someone can't interpret it so as to make it appear satanic, today we consider the song "Bibbidi-Bobbidi-Boo."

For those of you who don't have young children, this is the song from Cinderella that has the following dark, terrifying lyrics:

So I think we can all agree that scare-wise, this ranks right up there with the pea-soup-puke scene from The Exorcist.

No, but really.  I'm not making this up.  I had no idea that this was a thing until I was sent a link by a loyal reader of Skeptophilia, which had the following passage:


Bibbidi-Bobbidi-Boo (also called the Magic Song) is a novelty song written in 1948 and featured in the 1950 animated Disney film Cinderella, performed by actress Verna Fulton.  It is also a transformation spell, with which the fairy godmother transforms Cinderella into a princess, a pumpkin into a coach and mice into footmen...   [M]agic is REAL; evil Satanic rituals aimed at harnessing and producing energy.  There is fraudulent stage magic, based on tricks and illusion, but even this requires invocations of demons and chanting of spells.

Magicians work by exercising control over demons who are other-dimensional beings.  They often do this by calling the demons by name, by means of mental discipline and by leveraging symbols that are both concrete and imagined, as drawn in the air itself or expressed through other gestures.  Sometimes implements like bells, candles, incense, salt, knives or artifacts of various kinds are used, which are charged spiritually with demonic presence.

So that's pretty horrifying.  Here I thought that Disney just had old ladies in brightly-colored dresses dancing around singing nonsense to charm the children, when they were actually conjuring up other-dimensional demonic presences. 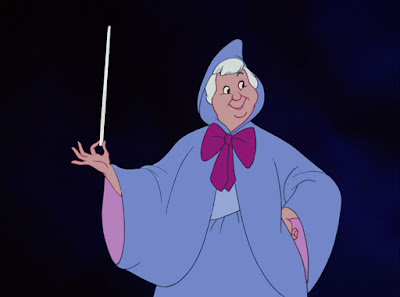 On the other hand, I always kind of pictured demons as having scary-sounding names like "Beelzebub" and "Mephistopheles."  You know, something with a little gravitas.  I'm don't think I'd be very frightened of a demon who answered to "Bibbidi-Bobbidi-Boo."

Anyhow, I started to look into this, and down the Rabbit Hole I went.  Of course there was a mention of this over at the phenomenally wacky David Icke Forum:


Anyone else ever think about this phrase as being actual magik?...  Also interesting that the Dragon Ball Z creator used the three B's as evil magik characters within the series.  Bu had the ability to "absorb" his victims to make himself more powerful.  He would eventually kill both the wizards Bibbidi and his son Bobbidi.

Because the creator of Dragon Ball Z clearly didn't get the idea for the names from Cinderella, or anything.

But that was hardly the only mention.  The site Life, Hope, and Truth did a piece on the song, and others like it:


[T]he Bible is clear—light (God’s way) and darkness (Satan’s way) have no commonalities (2 Corinthians 6:14).  The same power fuels the magic that goes “bibbidi-bobbidi-boo” in Cinderella (from a fairy godmother—a “good” witch) and the darkly prophetic “double, double toil and trouble” in Macbeth(from the evil witches). The power behind all witchcraft is Satan the devil.

It is important to remember that many forms of media, even children’s entertainment, promote the idea of “good” witchcraft.  This is a very sly attempt to deceive the world about the true source of all power apart from God: demonic darkness.

And here I thought both Cinderella and Macbeth were fiction.  Shows you what I know.

It wouldn't be complete, however, unless Focus on the Family got involved, which they did, with an article called, I shit you not, "Is 'Bibbidy-Bobbidi-Boo' Taboo?  Magic in Children’s Entertainment." At least the author comes to the conclusion that Cinderella is probably okay, although it's still better not to mess around with magic at all:


We’d suggest that it is important for parents to pay close attention to the manner in which spiritual power is presented in any story.  It’s crucial to ask questions like, "Who is the source of this power?  How is it portrayed?  What are the results of its use?"  Good spiritual power – for example, the power by which the apostles healed the sick and the lame in Jesus’ name – comes from God.  He gives it to His people to accomplish His purposes, and it is always used for His glory.  Occultic or evil spiritual power, on the other hand, serves the user’s own selfish interests.  It is dangerous, destructive and manipulative in nature.

You have to wonder where turning mice into horses falls on that spectrum.

But to return to my earlier point: fiction, people.  This is all fiction.  I.e., not true.  You can bibbidi and bobbidi all you want, you can even boo occasionally, and you're never going to improve your wardrobe or get a garden vegetable to turn into a transportation device.

I invite you to try, though.  It'd be entertaining for the rest of us.

Anyhow, to the person who sent me the first link, all I can say is: thanks.  The imprint of the keyboard I now have on my forehead will be a source of much amusement for my students.  As far as the people who believe all this horseshit: please, please don't go see Fantasia.  You'd probably piss yourself during the walking-broom scene.
Posted by Gordon Bonnet at 2:01 AM