I find it infuriating the way certain phrases have become dog whistles for people who live for the opportunity to take rights away from others.

For example, "religious freedom."  Of course, that one was appropriated by the narrow-minded centuries ago, when the Puritans came to North America seeking "religious freedom" and proceeded to harass, jail, torture, and execute people who didn't follow their religion.

It'd be nice if we'd outgrown that sort of thing, but we haven't, as evidenced by the announcement last week that there was going to be a new division of the Office of Civil Rights, within Department of Health and Human Services:

The "Conscience and Religious Freedom Division."

Make no mistake about it; this is not about protecting anyone's right to attend the house of worship they choose (or none at all).  That right was never in jeopardy.  This is about protecting the rights of Christians to deny services to people they disapprove of, and call it "exercising religious freedom."  This is giving license to the bakers who refused to make a wedding cake for a gay marriage.  This is about the hospital that refused to perform a hysterectomy for a transgender man.  This is siding with the pharmacist who refused to fill a prescription for birth control.

What is most galling about this is that many of the people who are crowing with delight about this are the same ones who were howling that America was on the verge of enacting Sharia law when a Target store in Minneapolis/St. Paul decided to accommodate some Muslim cashiers who refused to ring up pork products.

Folks, it's the same thing.  Whatever "religious freedom" means, it is not "being forced to abide by the rules of Christianity whether you want to or not."

And these people don't seem to realize how quickly this could be turned on its head.  What happens when a gay doctor refuses to provide service to a Christian patient?  Or atheist cashiers refuse to ring up a purchase of Christmas cards?  Or, for that matter, Muslim cashiers state that they won't handle bacon?

Look, it's simple.  If you went into the pharmacy business and didn't know you were going to be expected to sell birth control, you're an idiot.  Besides, the rules of your church don't say your job is to prevent others from using birth control; they just say you're not supposed to use it yourself.

Same for the bakers.  What, you didn't know there were gay weddings?  And hospital directors didn't know they were going to be expected to perform vasectomies, tubal ligations, and gender reassignment surgery?

If any of that is true, then you're more in need of a "Moron Protection Division" than you are a "Religious Freedom Division."

So it's not about freedom.  It never has been.  It's about maintaining the hegemony of the in-power majority (and yes, Christians, you're still in the majority, whatever Fox News's hysterical diatribes about how imperiled Christianity is in the United States have to say about it).  It's about maintaining the right of one group to refuse service to another group based upon simple bigotry.

But right now, the current administration is pushing this agenda full-throttle.  How much of it is deeply-held belief and how much cynical, calculated appeasement of the party base, I have no idea.  What I do know, however, is that this is a profoundly immoral stance.  It is no more moral than the "Whites Only" signs of the Civil Rights Era. 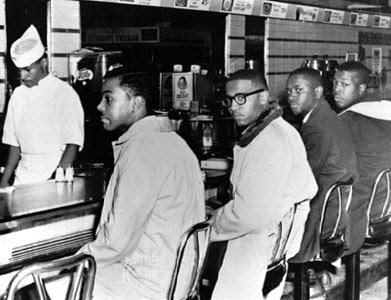 Sad that we have to fight these same battles again, isn't it?

I live in hope that wiser (and more just) heads will prevail here, but at the moment, the bigots are still in the ascendancy.  It's a scary time, and not just for this reason, but I believe that right will prevail.  As Stephen King put it, in his novel The Stand, "The effective half-life of evil is always relatively short."

May we see it end soon.
Posted by Gordon Bonnet at 2:04 AM