I'm going to ask you for a favor, and yes, this applies even to anyone reading this who is a non-science type: before you post and/or comment excitedly upon the latest popular-media article about some scientific research, go to the original research and see if it's really what the popular media are claiming it is.

I mean, at least read the abstract.  That's often enough to convince yourself that no, NASA hasn't developed warp drive yet; no, almost no reputable astronomers think that the mysterious light-intensity wobble from "Tabby's Star" is due to an alien megastructure; and no, the Yellowstone Supervolcano is not going to have a cataclysmic eruption soon (unless you consider "some time in the next 100,000 years" soon).

All, by the way, claims that I've seen posted on social media in the last month.

The latest example of this, however, comes from some research published a couple of months ago by physicists at the University of Rochester, in which they are said to have "created a device that generates 'negative mass.'"

This resulted in a number of near-hysterical articles about antigravity and "unknown forces in nature" and "rewriting everything we know about physics."

To which I respond: just hang on a minute.

Let's go to the original paper itself, which has the remarkably unsexy title, "Anomalous Dispersion of Microcavity Trion-Polaritons," which appeared in Nature: Physics.  Here's the abstract:


The strong coupling of excitons to optical cavities has provided new insights into cavity quantum electrodynamics as well as opportunities to engineer nanoscale light–matter interactions.  Here we study the interaction between out-of-equilibrium cavity photons and both neutral and negatively charged excitons, by embedding a single layer of the atomically thin semiconductor molybdenum diselenide in a monolithic optical cavity based on distributed Bragg reflectors.  The interactions lead to multiple cavity polariton resonances and anomalous band inversion for the lower, trion-derived, polariton branch—the central result of the present work.  Our theoretical analysis reveals that many-body effects in an out-of-equilibrium setting result in an effective level attraction between the exciton-polariton and trion-polariton accounting for the experimentally observed inverted trion-polariton dispersion.  Our results suggest a pathway for studying interesting regimes in quantum many-body physics yielding possible new phases of quantum matter as well as fresh possibilities for polaritonic device architectures.

Got all that?  Frankly no, neither did I, and I have a degree in physics.  But if you go through it carefully, and look up a few terms like "exciton" and "polariton" and "optical cavity," you find out that the researchers didn't invent a new sort of matter with "negative mass," as at least some of the popular-media summaries claimed.

It turns out that an "exciton" is related to a concept I ran into when I was taking a course in electromagnetism as an undergraduate; that you can treat the absence of an electron -- a "hole" -- as an actual particle, map how it moves, interacts, and affects other electrons or holes in the vicinity.  No physicist claims that these holes are actual things; simply that you can model how electrically-charged particles act by treating them as if they were.

In that sense, they're a bit like bubbles rising in water.  You can model the behavior of bubbles as if they are made of some exotic negative-mass object being repelled by gravity, and come up with completely consistent physics about their behavior; that doesn't mean they actually have negative mass.

They simply behave as if they did, so it's convenient to look at them that way. 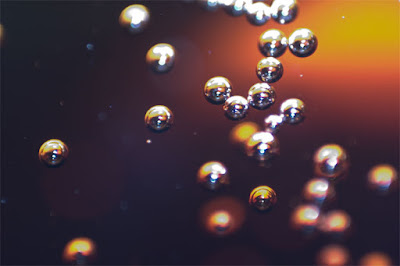 The problem, of course, is that this is not nearly as thrilling to the general public as saying that bubbles represent some strange new form of matter that experiences antigravity and will lead to Star Trek-style transporters and faster-than-light travel.  And since clicks and/or subscriptions are what keep popular media in business, you can be certain that they're going to characterize it whatever way it takes to make you click the link.  The vast majority of media outlets honestly don't give a damn what happens after that, up to and including whether you actually end up understanding what you read.

So please, please go to the source.  Look, it's not like I'm perfect in this regard myself all the time.  I get carried away by wishful thinking and confirmation bias, especially with regard to warp drive, which I really really REALLY want to be real.  But try to hold your preconceived notions in abeyance for at least as long as it takes to find the original research and see if what's being claimed is what the scientists actually said.

Then, and only then, decide whether you want to share the link.

My guess is that this would cut the amount of spurious media sharing by about 90%.  Of course, it's not like I've done any research on this myself.  Only a supposition based on no particular empirical evidence.

So please don't quote me on that.
Posted by Gordon Bonnet at 3:53 AM