So the long-awaited "Fake News Awards," intended to highlight the "most DISHONEST and CORRUPT members of the media," were announced yesterday.

Or at least, Donald Trump attempted to announce them.  Under a minute after the announcement was made, the site crashed, and last I checked, hadn't been fixed.  But a screen capture done before the site went down lets us know who the winners were.  They seem to fall into two categories:
Unsurprisingly, this included CNN, The Washington Post, and The New York Times.  The tweetstorm from Trump hee-hawing about how he'd really shown the press a thing or two by calling them all mean nasty poopyhead fakers ended with his mantra "THERE IS NO COLLUSION," which is more than ever seeming like "Pay no attention to the man behind the curtain."

So far, this is unremarkable, given that accusing everyone who disagrees with him of lying, while simultaneously claiming that he is always right, has been part of Trump's playbook ever since he jumped into politics.  But just last week a study, authored by S. Mo Jang and Joon K. Kim of the University of South Carolina School of Journalism and Mass Communications, brought the whole "fake news" think into sharper focus.  Because their research has shown that people are perfectly accepting that fake, corrupt news media exist...

... but that people of the other political party are the only ones who are falling for it.

Put more simply, people tended to think they were immune to the effects of fake news themselves -- i.e., they "saw through it."  The other folks, though, were clearly being fooled.

Probably the only reasonable explanation of why everyone doesn't agree with me, right?

It's just the Dunning-Kruger effect again, isn't it?  Everyone thinks they're smarter than average. 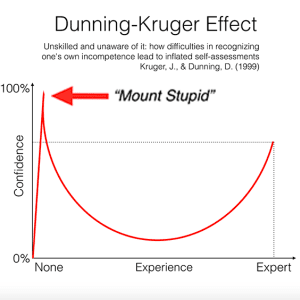 All this amounts to is another way we insulate ourselves from even considering the possibility that we might be wrong.  Sure, there are wrong people out there, but it can't be us.

Jang and Kim focused on American test subjects, but it'd be interesting to see how much this carried over across cultures.  As I've observed before, a lot of the American cultural identity revolves around how much better we are than everyone else.  This attitude of American exceptionalism -- the "'Murika, Fuck Yeah!" approach -- not only stops us from considering other possible answers to the problems we face, but prevents any challenge to the path we are taking.

It'd be nice to think that studies like this would pull people up short and make them reconsider, but I'm guessing it won't.  We have far too much invested in our worldviews to examine them closely because of a couple of ivory-tower scientists.

And anyway, even if they are right, and people are getting suckered by claims of fake news when it fits their preconceived notions to accept them, they can't mean me, right?  I'm too smart to get fooled by that.

I'm significantly above average, in fact.
Posted by Gordon Bonnet at 3:40 AM