I've tended to shy away from posting about creationists lately.

For one thing, I've said all I really intend to say on the subject, and it's extremely unlikely that either of us is going to change our mind significantly.  We come at knowledge from different angles, ones that really aren't reconcilable, so argument would be a complete waste of time.

For another, it's not like they've had a lot of new developments to contribute.  The bible doesn't change, sort of by definition, and any scientific discoveries are automatically ignored if they don't support young-earth creationism.  (Which, of course, is 99.9% of them.)

But every once in a while there's something that's so crazy, so off the deep end, that it almost seems like an inspired self-parody.  And I figure that anything that gives my readers a laugh, even if it's a rueful one, is worth writing about.

Which is why the article called "They Are Digging in the Wrong Place!" by Bodie Hodge that appeared over at Answers in Genesis is the topic of today's post.

It starts out in the usual fashion, that is, "you evolutionists sure are dumb."  He opens with a quote from the historical documentary Raiders of the Lost Ark, wherein a creepy Nazi guy ends up digging in the wrong place because he only had half of the inscription needed to decode where the Ark of the Covenant was buried.  Thus far, I was kind of yawning, because it seemed like it was more of the same-old, same-old.

But then he veers off into the aether with an argument that is as amusing as it is bizarre. 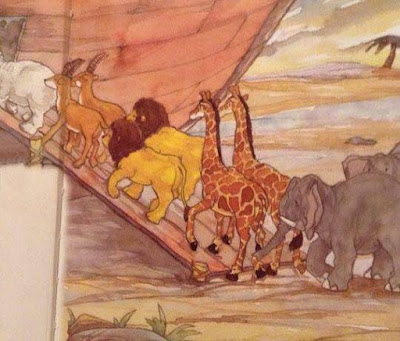 Um, Noah?  I think we might have a problem with the lions.

He explains that the big mistake we evolutionary biologists are making is that we're looking for fossils in the wrong place.  He correctly states that paleontologists look for proto-hominid fossils in strata dating from the Pleistocene and Pliocene Epochs, and for connections between dinosaurs and birds in strata dating from the Cretaceous Era and Paleocene Epoch.  So far, so good.  But then he said that this is wrong, because we're using the wrong timetable, and I'm not just talking about shortening everything up to fit in 6,000 years.

With no further ado, allow me to present Hodge's timetable of geological strata:

And yes, he's saying what it looks like he's saying.  The Pre-Cambrian Era was before the Great Flood, so presumably dates from the time of Adam and Eve and company.  From the Pliocene on are strata formed after the Ark touched down on Mount Ararat and the wombats waddled their way from the Middle East back to Australia.

And everything else -- all other rock strata -- were formed in forty days during the Flood.


Biblical creationists presuppose the Bible’s truth and subsequently the true history of the earth—including Noah’s Flood.  Evolutionists have presuppositions too, albeit, false ones, but presuppositions nonetheless.  This is why when evolutionists look at Flood rock they unwittingly believe that the rock was actually laid down slowly and gradually over long ages.  I suggest they have been indoctrinated to believe such stories as gradual rock accumulation over millions of years which has never been observed or repeated.  Thus, the concept of millions of years is not in the realm of science but interpretation.

Yup, the creationists have presuppositions, all right.  They include the idea that the physicists, biologists, chemists, astronomers, and geologists -- who all agree on the Earth's age at about 4.5 billions years -- are wrong, and a bunch of illiterate Bronze-Age goat herders in a benighted desert east of the Mediterranean Sea are the only ones in the history of the world who got it right.

Okay, I know even commenting on this is a waste of time. Hodge is right about one thing (the only thing in the article that was within hailing distance of the truth, actually); we science-types have assumptions of our own.  Or, more accurately, one assumption, namely, that science works.  After that, we go where the data and evidence take us.

Which, trust me, is nowhere near "Flood Rock."

So I hope you got a good laugh out of Hodge's argument.  I did, too, although it did ring a bit hollow, as there are still people trying to shoehorn this nonsense into public school science curricula.  Which would mean that we have turned public schools into a place where students will find indoctrination into a mythological worldview instead of quality science education.

Talk about "digging in the wrong place."
Posted by Gordon Bonnet at 2:34 AM