I try to be polite, but there are times that there really is no reasonable response to a person other than, "I hate to have to point this out, but you're lying."

Surprisingly, I am not talking about either Donald Trump or Sarah Huckabee Sanders.  Even more surprisingly, I'm not referring here to any politician.  I'm referring to a story that I ran into yesterday where people are taking seriously the claim by a Lithuanian woman named Stanislava Monstvilene that she not only has lived on, but has cured her own stage-4 brain tumor with, a diet composed solely of wet sand.

I know I say this a lot, but I wish I was making this up.  Sadly, this is true, and what's worse, there are some natural-diet alternative-medicine types who think this is really (1) possible, and (2) a good idea.  But let Monstvilene speak for herself:


I had a late stage brain tumor.  They said I wouldn’t last long.  My hemoglobin level was 60 [some five times over the normal range].  I was passing by and once an idea came to my mind – take the sand and eat it.  For the first time I choked but then I got used to it.  You should not mix it with food or water.  You should not eat anything else, otherwise you will feel sick.  And the water should not be drunk.  I used to eat wet sand so after it I do not want to drink.

Just reading this makes me want to drink, and I'm not talking about water.  But six AM is a little early for a double scotch, so I'll just soldier on. 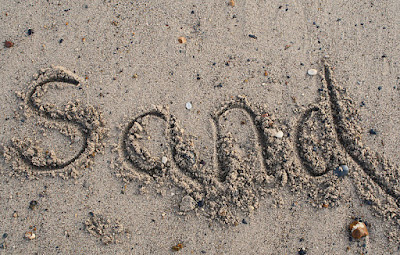 There is a condition where people feel compelled to eat non-food materials, especially dirt, chalk, stones, hair, and paper.  It's called pica, and is associated with mineral deficiencies, anemia, and mental instability.

And although some of those substances -- particularly dirt and chalk -- are mineral-rich, your body is generally incapable of handling minerals in that form.  Most minerals (such as calcium, iron, zinc, magnesium, cobalt, and so on) that are necessary for health are only absorbed easily if they're chelated -- bonded to an organic compound.  (This is why, for example, zinc supplements are usually in the form of zinc gluconate, and you will not achieve the same effect by chewing on a galvanized nail.)

So pica might result in a compulsion to eat weird stuff, but there's no indication that eating the weird stuff does anything for the underlying condition that caused the pica.

But back to the Sand Lady.  Because she's not just saying she's supplementing her diet with wet sand; she's saying that wet sand is all she eats.  Ever.  (Or drinks.)

To which I respond: bullshit.

Sand, and it pains me even to have to state this, has zero calories.  Most sand is finely ground silica and various types of feldspars (the exactly composition, naturally, depends on the kind of rock the sand was eroded from).  But in no case does sand contain enough nutrients to survive on.

So at the risk of appearing as a scoffer, I'm 100% sure that Ms. Monstvilene is chowing down on sand when the reporters are around, and when no one's looking, she's sneaking out for a cheeseburger with extra mayo.

It's a bit like the couple who claimed to be "Breatharians" (living on nothing but air and the "energy of the universe") and the Seattle woman who said she was going to spend a hundred days "living on light" (this didn't work out so well, as her health deteriorated from the combination of starvation and vitamin deficiency so much that she had to discontinue the stunt on day 47, at which time she had lost 20% of her body weight).

You can't subsist on light and/or dirt for the very good reason that you are not a plant.  Now, I know that loony people make loony claims, kind of by definition.  But that doesn't mean you need to believe them, or necessarily even consider them seriously.  There is enough out there that deserves investigation and is actually scientifically verifiable; last thing we need is to spend our time trying to figure out how some woman in Lithuania is living on a sand diet, when in fact, she is not.

(The irony that in writing this point, I am spending my time addressing this situation, is not lost on me.)

So there you are.  There are times when it is perfectly justifiable to respond "You are talking complete horse waste" to a claim.  Now, you'll have to excuse me, because all of this talk of eating is making me hungry.  Not for dirt, fortunately.  I'm thinking more of bacon and eggs.
Posted by Gordon Bonnet at 1:59 AM