Instability at the top

Let me say this as plainly as I can:

The President of the United States is a dangerously unstable man.

I do not say this lightly, and it's not simply that I disagree with his political agenda.  I've commented before on this administration's anti-science, anti-intellectual, anti-environmental leanings, and that's not what I'm referring to here.

The issue I want to address today is that we are being led, being represented to the world, by a man who is temperamentally unfit to lead a Moose Lodge meeting, much less an entire nation.  He shows every sign of being paranoid, delusional, petty, hypersensitive, and childish.  Some have suggested he has dementia or narcissistic personality disorder.  I'm no psychologist and do not know enough to weigh in on those counts, but one thing I do know.

The behavior of Donald Trump recently is the product of a profoundly disturbed mind.  And this would be true regardless of what party he belonged to.

That point was brought home to anyone who was listening by his tweet day before yesterday, aimed at Kim Jong-Un, president of North Korea:


North Korean Leader Kim Jong Un just stated that the “Nuclear Button is on his desk at all times.”  Will someone from his depleted and food starved regime please inform him that I too have a Nuclear Button, but it is a much bigger & more powerful one than his, and my Button works!

So we have a president for whom the possibility of nuclear devastation, costing tens or (more likely) hundreds of thousands of lives, has boiled down to a dick-measuring contest. 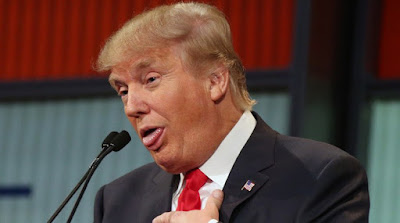 I find it astounding -- and appalling -- that this man has any support left, much less one-third of Americans and damn near every Republican Senator and Representative in Congress.  Look, folks, this goes beyond party affiliation and political expediency.  It might serve your agenda to keep Trump in office, pretend that the GOP is a unified front, see if you can accomplish your ends before the whole thing implodes.

But if you're doing that, you're responsible for the outcome of leaving him in office.

On some level I understand the impulses that drive people to a charismatic populist like Donald Trump.  If you're not frustrated with governmental gridlock, with lobby-driven, back-room politics, with lawmakers who pay more attention to their corporate sponsors than to their constituents, you haven't been paying attention.

But there comes a time when the ethical thing is to admit you made a mistake.  Trump has done nothing to end any of the things he ranted about on the campaign trail, and contrary to what you'll hear on Fox News, it's not because of stonewalling by the Democrats.  How could it be?  The Republicans have a majority in both houses of Congress, governorships state-by-state, and the United States Supreme Court.  If Trump et al. haven't done what they promised -- "draining the swamp" -- it's because they had no intention of doing so in the first place.  They followed up a pledge to end corporate cronyism by appointing the richest, most pro-corporate, most avaricious set of government appointees since the Robber Baron Era.

The most pressing problem, however, is Trump himself.  Besides his incendiary playground taunting of people like Kim Jong-Un, he also has a capacity for lying that makes me wonder if he even realizes he's doing it.  The non-partisan site PolitiFact -- winner of the Pulitzer Prize for journalism -- has fact-checked Trump's statements, and found that 54% of them rate as "false" or "mostly false."

But no one in his own party calls him on it.  His spokesperson, Sarah Huckabee Sanders, dodges and weaves every time the topic comes up, and in fact stated outright in an interview on The View that "ninety-five percent of what the President says is not a lie."

I'd love it if someone could print out a list of all two-thousand-odd lies Trump has told in his first year as president, and ask Sanders to provide evidence for each of them that he was telling the truth.

Except, of course, for the five percent where she admits he was lying.

Instead, they've claimed that it's the media that's making it all up, despite the fact that most of the statements in question are recorded either on tweets or on video.  The response makes sense, I guess; the easiest way to bamboozle the general populace is to accuse your opposition of what you're doing yourself.  It means that most everyone will fall back on confirmation bias -- cherry-picking statements so that they only listen to the ones that conform to what they already believe.

The bottom line is that this man is jeopardizing the country with his bellicose taunts and continuous lying.  I don't care if you're a Democrat, Republican, Libertarian, Socialist, or anything else.  If you evaluate not the spin of the policy wonks, but what Trump himself has said and done, there is no other possible conclusion.

Which means that the Senators and Representatives who are sitting in Congress, pretending everything is all right so they can maintain their power and achieve their ends, are responsible for every bit of the chaos, instability, and loss of human lives that his irresponsible and juvenile statements will ultimately cause.
Posted by Gordon Bonnet at 1:56 AM