It is a good day to die. Or to be a tourist. Your choice.

It is with great pleasure that I announce to you that the world's first Klingon tourist center is opening in Stockholm on February 3.

It's called "Visit Qo'noS," which is a good thing, given that it only contains one word in Klingon.  Otherwise you'd have to feel sorry for the receptionist, who would have to answer the phone, "Good morning," and then make noises sounding like a water buffalo being examined by a proctologist.  Klingon is a true language, invented by linguists hired by the people in charge of the Star Trek franchise; it has a real syntax, phonetic and morphological structure, and so on.  So, even if it's not exactly euphonious to human ears, it deserves recognition as one of the only complete synthetic languages (a distinction it shares with J. R. R. Tolkien's Elvish, John Quijada's Ithkuil, and only a handful of others).

And now, there's a visitor center were you can go to celebrate all things Klingon. 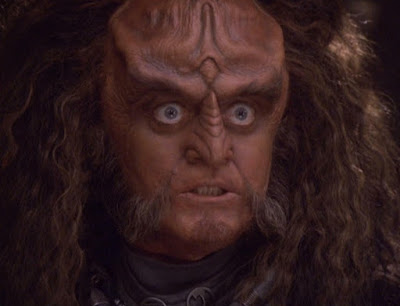 Apparently Klingon culture is a big thing in Scandinavia.  There's the Klingonska Akademien, based in Uppsala, which teaches classes in the language, and in fact published the world's first Klingon dictionary.  I have not heard whether they sponsor such events as Bat'leth Tournaments, wherein combatants attempt to sever their opponents' valuable body parts with a double-pointed sword.  In researching that, however, I did find out that you can buy a Bat'leth on Etsy, eBay, and Amazon, and if you don't want the real thing -- and I'm using the word "real" guardedly -- you can buy a Bat'leth letter opener from ThinkGeek. 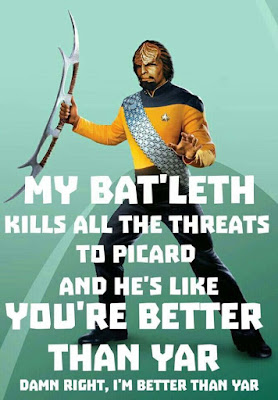 I have to say that despite my poking fun at this Extraterrestrial Extravaganza, there's a part of me that thinks it is pretty awesome, and it's not because I'm some kind of closet Trekkie (which I'm not; I'm completely out of the closet.  I love Star Trek, especially Star Trek: The Next Generation, several episodes of which I can quote virtually in toto from memory).  But even beyond that, my appreciation for this has to do with how awesome it is that the linguists hired by the original show have created a language that is complex and rich enough to spawn a tourist center and a language academy.  C'mon, don't you think that's cool?  You can even take college courses in Klingon. I'm not making this up. The University of Texas/Austin, which has one of the most prestigious Linguistics Departments of any college I know of, has a course in Klingon and other invented languages (or conlangs, as they're called, from "constructed languages").  If you're more serious about your studies, you can attend the Klingon Language Institute, in Flourtown, Pennsylvania (motto: "qo’mey poSmoH Hol," which means "language opens worlds, or else crushes them into dust if they dare to resist").  There, you can achieve fluency, which will no doubt impress your friends, coworkers, and potential lovers ("I know that sounded like I was gargling with yogurt, but it actually means 'You are extremely hot' in Klingon.").

And if you're really into it, you can attend "qep’a’ cha’maH vaghDIch," which is the 25th Annual Klingon Language Convention, being held July 19-21 in Indianapolis.

Okay, I know I'm kind of waxing rhapsodic about this, but it's a particular fascination of mine.  For some years, I have offered an independent study class at my high school in Intro to Linguistics, and the final project for this class is to create the rudiments of a synthetic language.  I assign this project, in part, because it gets students to understand how complex language actually is; I've found that they learn more about English syntax by trying to create a synthetic one than they would from any number of English grammar classes.  They are supposed to submit, as part of the project, a lexicon of at least a hundred words, and a passage from English that has been translated into their language -- my last group translated The Very Hungry Caterpillar, an accomplishment that was far harder than it sounds and of which they were, very rightly, proud.

It's always interesting to see what happens when the reins are loosed on human creativity.  We might laugh about a Klingon Tourist Center (and better to laugh about it than directly at it -- when you laugh at Klingons, they tend to rip your arm off and beat you to death with it).  But it really is pretty cool that such a thing could happen.

I realize I am opening myself up to some serious ridicule here for saying that, but I don't care.  So, to anyone who is going to give me grief about this, I say: "Hab SoSlI' Quch." ("Your mother has a smooth forehead.")
Posted by Gordon Bonnet at 1:57 AM