It's that time again

It's been a big week for time travelers.

I suppose it makes sense.  If you're gonna come back to 2018 from the future, dropping in en masse means you're not just a lone voice shouting about how Donald Trump really does act a lot like a Morlock.  On the other hand, the four time travelers who surfaced last week didn't really have much in common, so it might have been better to stagger their appearances, all things considered.

First we have "Mona," who says she comes from the year 2100, when she was given the official job of Time Traveler, and chose to come back here.  She says she was born in 2060, and when she was little, she always wanted to get good grades so she'd "get rich when she was an adult."  But that idealistic goal was thwarted when "two men in black suits" left a note on the door that only Mona was allowed to read.

Spoiler alert:  It was not an invitation from Hogwarts.

She was given instructions for where to go, and again admonished not to let anyone (including her parents) know what she was doing.  So she did as she was told, and was welcomed into the Time Traveling Division of the US Government. 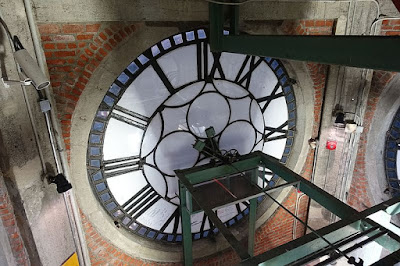 [image courtesy of photographer Guilhem Vellut and the Wikimedia Commons]

Now, I don't know about you, but I think it would be wicked cool if the government had a Time Traveling Division.  I mean, we do have the Department of Education, which under Betsy DeVos's leadership is attempting to transport us back into the Middle Ages, but that's not really the same thing.

Anyhow, after joining up, she lived in an "underground bunker in the middle of nowhere," where "the only thing [she] had for education-wise (sic) was how to become a time traveler."  She had injections that slowed her aging down by ten percent, which would certainly be nice.  Then she traveled back to "the early 2000s and even back to the 1950s," where she was instructed to "take notes on tragedies."

This was extremely boring, Mona says.

Then she gets to the most important stuff, which is what's going to happen in the future (at least, what will be the future to you and me).  No flying cars, she says, which sucks.  The roads, she said, were "solar powered, which reduced crashes," which doesn't make a lot of sense to me.  I mean, roads kind of just sit there, and I don't see how making them out of solar panels would help out the cars or reduce the number of accidents.

Global warming, she said, happened as per the scientists' predictions.  "The sea level rose," Mona tells us, "and omigod it's hot."  So that sounds like concrete proof, right there.


Second, we have Clara, who went forward to the year 3780, and then came back here to tell us all about it.  She was lucky, she says, because other people had been sent forward and weren't able to come back.

Because, of course, in 3780 there was a catastrophic war between humans and robots.

People, she says, designed robots for the purpose of making them coffee (I'm not making this up), but then the robots understandably decided they were sick of being baristas, and tried to overthrow humanity.  And they succeeded.  Humanity was totally defeated, probably because without coffee, many of us could not defend ourselves effectively, or necessarily even realize there was a robot aiming a laser pistol at us.

Her instructions, she said, were to bring back some 40th-century robotic technology to 2018.  Why is unclear.  Maybe she wanted to get the robot rebellion started early, figuring that given the state our government is in now, not waiting until 3780 to turn it over to our robotic overlords might be an improvement.

Anyhow, she said that the time machine's name was "Isaac" (for the record, I am still not making this up), and it was made of a "collaboration of metallic chairs, human beings, and series in physics of electricity and frequencies of time."  Whatever the fuck that means.

How it works, Clara says, is that the needles "inject electricity" into the time traveler's body, and "the whole thing is control [sic] by formulas."

At that point, I was laughing so hard I couldn't hear what Clara was saying, so I turned the video off.  (The whole thing is 22 minutes long, and I got through five.  Maybe you're made of sterner stuff than I am, and will persevere.  If so, I doff my hat at you, acknowledging your greater bullshit tolerance.)


Third, we have an unnamed guy in a bright blue Columbia jacket who said he jumped from the 1990s to the year 6000.  (So I guess we survived the Great Robot Rebellion of 3780 after all.)  In 6000, he says, there's artificial intelligence that runs the whole world, and humans are "spreading our consciousness throughout the universe."  Which sounds pretty good.

Then he brings forth the pièce de resistance -- a photograph of a city in the year 6000.  (If you understandably want to skip to the good part, he pulls the photograph out at 5:45.)  I'll warn you, though; the photograph is a little... disappointing.  It looks like a blurry view of the Chicago skyline.  The blurriness, he says, is because "time travel causes photographs to get distorted."

So that explains that.

Then he tells us the story of a friend of his who he had to leave behind in 6000.  He has to stifle a sob more than once, even though, he says, the friend "is in a good place... because the future is a utopia."


Last, we have a guy who made it all the way to 9428.  By this time, I was getting a little tired of hearing about how it sounded unbelievable but it was all true, and I kind of stopped listening.  (However, he did say something about the time machine being "a metal chair suspended over a huge swimming pool... filled with blue jelly."  Which if nothing else was an interesting mental image.)

Anyhow.  That's today's news from the world of woo-woo.  Me, I'm just glad we're going to make it to 9428, because at the rate we're going, I figured it was a flip of the coin that we'd survive to the end of 2018.  I doubt I'll still be around, but maybe they'll come up with those anti-aging drugs Mona takes, and I'll have a shot at making it at least to 2100 and seeing how solar-powered roads work.
Posted by Gordon Bonnet at 1:55 AM