After seven years in the business of writing six times a week about bizarre beliefs, it's a little astonishing that I can still run across ones that I've never heard of before.

It is less surprising, perhaps, that the source of this claim was the inimitable Nick Redfern, whose inquiries into ghosts, the paranormal, and cryptozoology has made him something of a frequent flier here at Skeptophilia.  This time, though, he came up with something pretty unique:

That a road in Dartmoor, Devonshire, England is haunted by a pair of gigantic hairy hands.

According to the legend, the road between the villages of Postbridge and Two Bridges is fraught with peril.  People driving along it (or, in an earlier day, riding a horse) were putting themselves at risk of being accosted by a pair of disembodied hands that appear out of nowhere, grab the steering wheel (or reins), and cause the car (or horse) to veer off the road.  The tale is interesting enough that Redfern has actually written about it twice, first back in 2011, and most recently last week. 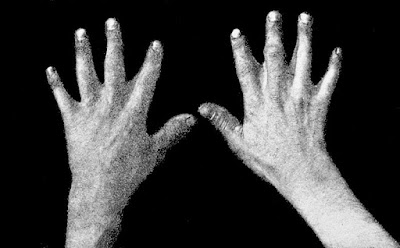 I will leave you to check out Redfern's accounts of the Hairy Hands causing accidents, some of which go back to 1910, and will just quote one -- an encounter that allegedly happened in 2008:


Michael Anthony worked, at the time, for a supplier of photo-copying machines in Britain, and spent a lot of time traveling the length and breadth of the country meeting clients and promoting – and hopefully selling and/or leasing – his company’s products.  Late on the night of January 16, 2008, Anthony was driving along the B3212 road when he had a terrifying encounter with the unknown...

According to Anthony, it was around 11.00 p.m., and he had been visiting a customer in Postbridge.  The evening had gone very well, a deal had been struck, contracts had been signed and exchanged, and a pleased and satisfied Anthony was now homeward bound to the city of Bristol...

Anthony had barely left Postbridge, when his skin began to feel distinctly cold and clammy, and a sense of dread and fear completely enveloped him...  He explained further that perhaps two minutes after the atmosphere in his car became oppressive, fear-filled, and even somewhat malevolent, he felt his hands begin to “go numb.”  He added: “I actually thought I was having a stroke.”  Fortunately, it was no stroke.  In some ways, however, it was far worse.

Anthony could only look on in both complete horror and disbelief as, just as had been the case so many decades earlier, a very large pair of hair-covered hands, or “paws,” as he intriguingly described them, encased his own hands, and then suddenly attempted to forcibly steer the car towards the edge of the road and skidded onto the cold, moonlit moors.  To his credit, Anthony struggled valiantly with the wheel and, on three occasions, fought off the actions of the spectral, hairy intruder in his midst.

Interestingly, after the third attempt, said Anthony, the hands simply vanished into thin air, amid a brief flash of light.  The shaken driver floored the accelerator and did not stop until he reached one of the service stations on the M5 motorway.

So there you have it.  I can say with some certainty that, skeptic though I am, if this happened to me, I'd scream like a little girl and wet my pants.  Because although I'm a skeptic about the paranormal, I'm also a great big coward.

Be that as it may, I'm a little disappointed that I only found out about this now, because I was in England two summers ago and took a train right through the middle of Dartmoor.  Had I known about the Hairy Hands legend, I would have definitely made a detour to Postbridge, and dared the Hands to do their worst, even knowing that if the whole thing turned out to be true, I'd have certainly regretted that decision.

But still.  So near and yet so far.

Anyhow, there is is -- a paranormal legend that I'd never run across.  You should definitely check out Redfern's accounts, which are highly entertaining reading.  I wasn't able to find out where the Hands supposedly came from -- whether they're supposedly from a ghost, a werewolf (the hair, right?), or something else.  Whoever they belong to, however, might want to consider driving lessons.  Better safe than sorry.
Posted by Gordon Bonnet at 2:40 AM