Thanks to a friend and loyal reader of Skeptophilia, I now have a large bruise in the center of my forehead from doing repeated facepalms.  I mean, this is not an unusual occurrence, considering the topics I write about, but the article that spawned this post might have the highest facepalm-to-wordcount ratio of anything I've ever read.

So naturally, I want to tell you all about it, so you can share in the experience.

It's entitled, "Why Eating Food During Lunar Eclipse is Harmful," by a guy named Sadhguru.  The whole thing probably came up because of the lunar eclipse we had this morning, but of course that means all of the advice he gives is a little late.  So my apologies if you already came to grievous harm from your cornflakes, or something. 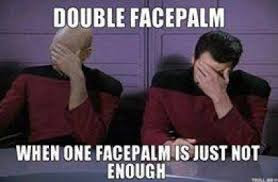 Anyhow, let's take a look at what Sadhguru has to say.  It'll be fun!  Trust me!


During lunar eclipses, what would happen in 28 days over a full lunar cycle is happening in a subtle way over the course of two to three hours of the eclipse.  In terms of energy, the earth’s energy is mistaking this eclipse as a full cycle of the moon.

So, all of this bad shit goes down because the Earth made a mistake? You'd think the Earth would have figured out about lunar eclipses by now, since they have occurred twice a year for the past 4.5 billion years.  I mean, it's not like at this point it should be a surprise.


Certain things happen in the planet where anything that has moved away from its natural condition will deteriorate very fast.  This is why while there is no change in raw fruits and vegetables, there is a distinct change in the way cooked food is before and after the eclipse.  What was nourishing food turns into poison.

I hate it when my grilled cheese sandwich turns into poison, don't you?  Ruins my whole day.

Anyhow, Sadhguru goes on to explain what a poison is, in case you didn't already know:

So, let's see.  Cooked food will subtly but rapidly deteriorate during an eclipse, because the Earth got surprised again, and if you eat it, you'll either die, fall asleep, or "feel dull."  Got it.

But I'm sure what you're wanting to ask by this point is, "Yes, Sadhguru, but what about raw food?  Can we eat raw carrots or something without poisoning ourselves into dullness?"  Fortunately, he addresses that very point:


If there is food in your body, in two hours’ time your energies will age by approximately twenty-eight days.  Does that mean you can eat a raw food diet on such a day?  No, because the moment food goes into your body, the juices in your stomach attack and kill it.  It becomes like semi-cooked food and will still have the same impact.

Well, I sure as hell hope your stomach acid kills your food, although I do question why you're eating things that are still alive.  I mean, we're not Klingons snarfing down live gagh or something, fer cryin' in the sink.

I mean, I'm not.  No judgment here if that's what you do. 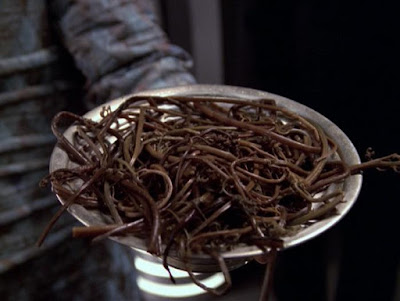 But what do we do about all of this?  I mean, I don't want to have 28-day-old live chickens in my stomach, or anything. not to mention eating poisonous banana pudding, or whatnot.


When the body is in a confused state, the best thing is to keep it as empty as possible, and as conscious as possible.  One of the simplest ways to be conscious is to not eat. Then you will constantly be conscious of at least one thing.

Yes.  Being really hungry.  But do continue.


And the moment your stomach is empty, your ability to be conscious becomes so much better.  Your body becomes more transparent and you are able to notice what is happening with your system much better.

I don't think I want my body to be transparent.  As I recall, this caused problems in the historical documentary Hollow Man, wherein Kevin Bacon turned himself invisible by stages, and it not only looked extremely painful, it was seriously puke-inducing to anyone watching. 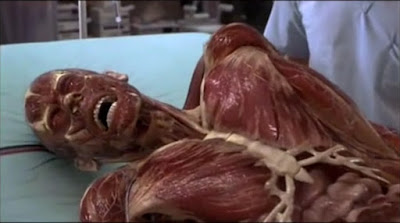 In any case, we don't have anything to worry about, given that the lunar eclipse is already over, and we don't have to think about this stuff again until the next one on July 27.  Me, I'm going to throw caution to the wind and go fix myself some nice bacon and eggs for breakfast.  It may be subtly deteriorated lunar poison, but it's really tasty.
Posted by Gordon Bonnet at 2:00 AM