There are some days that I feel like I should just give up and let natural selection take its course.

The most recent occurrences that have resulted in my wanting to step back and let humanity turn into one big Darwin Award revolve around two completely separate situations in which people have decided that it's a smart idea to voluntarily ingest detergent.

In the first, we have the latest idiotic thing that teenagers are daring each other to do, which is to swallow laundry detergent pods.  The so-called "Tide Pod Challenge" -- which was checked out by Snopes, and is actually a real thing -- is further evidence that all you have to do is add the word "challenge" to something, and people will be lining up to do it, often having their friends filming them at the time.

This has led to a number of incredulous public figures stepping forward and saying that no, you shouldn't eat laundry detergent, even if your bro dares you to.

"I can’t even believe I have to say this right now," said Diane Macedo, of Good Morning America.

No, Diane, I can't either.  But evidently we do.

Macedo added, "They are brightly colored and they’re very nicely wrapped, but these Tide pods are not candy or pizza toppings or breakfast cereal—they are not edible."

New England Patriots tight end Rob Gronkowski concurs.  "What the heck is going on, people?" Gronkowski said.  "Use Tide Pods for washing.  Not eating.  Do not eat....  I’ve partnered with @Tide to make sure you know, Tide Pods are for doing laundry.  Nothing else!" 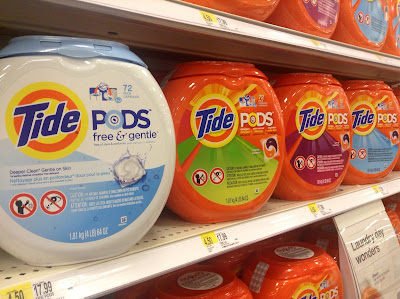 [image courtesy of photographer Mike Mozart and the Wikimedia Commons]

I'm always hesitant to jump on the middle-aged curmudgeon "Kids These Days" bandwagon, but seriously; I do not recall during my childhood that anyone had to make a special point to me not to drink Windex or eat my dad's shoe polish.  And although I did many dubiously intelligent things after hearing the magic three words -- "I dare you" -- I can say with some pride that snorting Comet tub and tile cleaner was not amongst them.

On the other hand, an article that a loyal reader of Skeptophilia brought to my attention a couple of days ago indicates that neither laundry supply consumption nor being a complete fucking moron is territory occupied solely by teenagers.  CBC News British Columbia featured a story last week about a Canadian couple who are facing dozens of charges in court surrounding their sale of a "tonic" containing sodium chlorite -- better known as laundry bleach -- to cure everything from AIDS to autism.

Stanley and Sara Nowak are accused of breaching the rules of the Food and Drug Act by selling their cure-all, along with the claim that it can "eliminate pathogens."  Which, strictly speaking, is true.  Sodium chlorite is pretty good at killing germs.  The difficulty, of course, is that it will also kill you, but your corpse will be delightfully germ-free.

It's the usual problem with people claiming that some random compound will destroy viruses, bacteria, cancer cells, or whatever, in vitro.  That doesn't tell you a damn thing about whether it will (1) work in vivo, or (2) be safe to consume.  After all, you can kill cancer cells in vitro by pissing in the petri dish.  But that doesn't mean that it's a good idea to ingest urine.

Oh, wait, there are people who do that, too.

The Nowaks are completely unrepentant about selling gullible sick people laundry bleach.  "It has an effect on you," Nowak said in an interview.  "I can't see how they can stop this from going in the same direction it's been going for the past ten years... it's working."

Well, yeah, if by "working" you mean "stupid people are buying it."  As far as curing anyone of their illness, however, not so much.  And given that "death" certainly is "having an effect," I guess that's not an outright lie, either.

So there you have it.  And in case I haven't made this clear enough: don't eat your damn laundry products.  That is not what the adage "a clean mind in a clean body" means.  Although if you have to wait for your favorite football player to point this out, maybe you're the person Darwin was thinking about when he came up with the idea of "low evolutionary fitness."
ttps://
Posted by Gordon Bonnet at 1:58 AM