After yesterday's post, about Bodie Hodge, the creationist whose ideas are so loony they're almost inspired, today we take a look at his counterpart in the world of woo-woo.

Ever heard of Leonard Horowitz?  He's a guy who's been around a while, and who in fact is well-known enough to merit a page in The Skeptic's Dictionary, wherein he is described as "... an evangelical huckster.  The only people who love him are talk show hosts and the good people who are so paranoid that they will believe anything that supports their deranged thought processes."

Which is pretty unequivocal.

Horowitz himself was a dentist, who despite the medical training that is required for the field, evidently never absorbed much in the way of standard biological information, nor (for that matter) common sense.  He claims, for example, that flu vaccines cause sterility, which I know will come as a great shock to the thousands of individuals who get flu shots yearly and go on to have children.   Instead of getting a flu shot, Horowitz says, you should merely dose up on vitamin C and D, and purchase from his website (c'mon, you knew he was selling something) "alkalanizing water" and "covalently-bonded silver hydrosols" that will render you invincible.

Dr. Horowitz is nothing if not modest.  On his website, he says the following about himself:

There is no more knowledgeable, credible, credentialed, and prolific professional in the world addressing the duplicity of geopolitics and economics influencing “healthcare,” and the solutions to these and other urgent problems affecting global populations, than Dr. Horowitz.

So there you are.

He also has a lot to say about his own books, which are of course brilliant:

His 2007 decryption of Leonardo da Vinci’s most famous drawing revealed the mathematics of LOVE: The Real da Vinci CODE; and his follow-up text, the most monumental of his 30-year career, The Book of 528: Prosperity Key of LOVE, reveals “God’s creative technology,” available for revolutionizing music, recording artistry, healthcare and medicine, environmental protection, natural resource restoration, along with civilization’s transformation as an “enlightened species” choosing peaceful sustainable collaboration versus murderous degenerative competition and lethal consumption.

Two other wonderful Horowitz creations are the "Water Resonator" (a sticker you apply to the water jug in your fridge) that "displays the precise sound frequencies of universal creation to restore nature's resonance energy and electromagnetic purity of water," and the "DNA Enhancer," another sticker that you place on your acupuncture points, which works because "DNA is nature's bioacoustic and electromagnetic (that is, 'spiritual') energy receiver, signal transformer, and quantum sound and light transmitter." 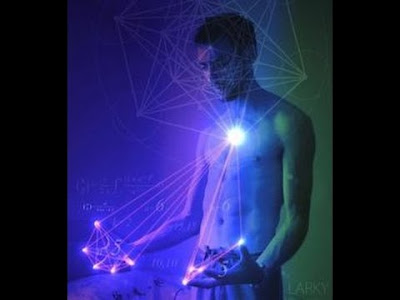 But by far my favorite Horowitz claim is that the standard musical tuning of A = 440 hertz is gradually turning music listeners into mindless zombies.  The problem, apparently, is that the "natural" tuning of A = 444 hertz was suppressed by the Rockefellers, who realized that tuning orchestral instruments to 440 would allow them control the minds of anyone exposed to music.  The whole thing involves the Illuminati, the Federal Reserve, Lucifer, Muzak, the Manhattan Project, Elvis Presley, Pat Robertson, the Nazis, Pythagoras, Nikola Tesla, and the Beatles.  Which, I believe, makes it the single most comprehensive conspiracy theory ever invented, needing only a mention of HAARP to make it a shoo-in for the Gold Medal of Woo-Woo.

You can wade through his website, if you like; just the illustrations make it one of the most inadvertently hilarious things I've ever read.   But in case you don't have the time, inclination, or spare brain cells to kill, here's the abstract of a paper he wrote (yes, it's set up like a traditional scientific paper, with an abstract, introduction, background, methodology, and so on):


This article details events in musical history that are central to understanding and treating modern psychopathology, social aggression, political corruption, genetic dysfunction, and cross-cultural degeneration of traditional values risking life on earth.  This history concerns A=440Hz “standard tuning,” and the Rockefeller Foundation’s military commercialization of music.  The monopolization of the music industry features this imposed frequency that is “herding” populations into greater aggression, psychosocial agitation, and emotional distress predisposing people to physical illnesses and financial impositions profiting the agents, agencies, and companies engaged in the monopoly.   Alternatively, the most natural, instinctively attractive, A=444Hz (C5=528Hz) frequency that is most vividly displayed botanically has been suppressed.  That is, the “good vibrations” that the plant kingdom obviously broadcasts in its greenish-yellow display, remedial to emotional distress, social aggression, and more, has been musically censored.  Thus, a musical revolution is needed to advance world health and peace, and has already begun with musicians retuning their instruments to perform optimally, impact audiences beneficially, and restore integrity to the performing arts and sciences.  Music makers are thus urged to communicate and debate these facts, condemn the militarization of music that has been secretly administered, and retune instruments and voices to frequencies most sustaining and healing.

Myself, I like the "greenish-yellow good vibrations" part the best, and will now immediately re-tune my flute to A = 444 hertz.  (I'd also attempt to do the same with my bagpipes, but given that "soothing psychosocial agitation" is really not something most people associate with bagpipe music, I probably shouldn't bother.  Besides, tuning bagpipes is kind of a losing proposition in the first place.)

Oh, yeah, and he says that 528 Hertz vibrations "resonate the heart of rainbows."  Whatever the fuck that means.

His "About the Author" bit (in case you didn't get that far) also makes for good reading, and includes a mention of various accolades he's received:  "Dr. Horowitz has been honored as a 'World Leading Intellectual' by officials of the World Organization for Natural Medicine for his revelations in the musical mathematics of creationism that are impacting the fields of metaphysics, creative consciousness, sacred geometry, musicology, and natural healing according to his life’s mission―to help fulfill humanity’s Divine destiny to actualize world peace and permacultural sustainability."

Whoooo.  Those are some serious credentials, dude.  You had me at the "revelations in the musical mathematics of creationism" part, not to mention the whole "sacred geometry" thing, which always makes me picture people worshiping equilateral triangles and chanting Euclid's Postulates while burning incense.

Anyway.  That's our woo-woo of the day, and one of my particular favorites.  Whatever else you can say about Dr. Horowitz, he's certainly earnest, and one should never discount the humor value of some of these people.  So thanks for the chuckles, Lenny.  Keep up the good work.
Posted by Gordon Bonnet at 10:35 AM