I suspect a lot of us have been pining for some good news lately.

Between Kim Jong-Un bragging about his capacity for unleashing nuclear destruction on anyone who insults Dear Leader, to Donald Trump alternately bragging about the size of his genitals and saying that anyone who calls him childish is a stinky stupid poopy-face, to various natural disasters and human-made conflicts, it's all too easy to decide that the only acceptable response is to curl up into a fetal position and whimper softly.

So I was kind of tickled to run into a post made a couple of days ago by Dr. Steve Novella over at the wonderful blog NeuroLogica, which discusses a study that has found the backfire effect isn't significant -- at least under controlled conditions. 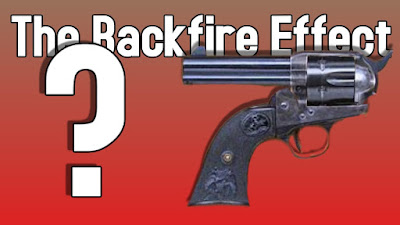 The paper, "The Elusive Backfire Effect: Mass Attitudes' Steadfast Factual Adherence" by Thomas Wood of Ohio State University and Ethan Porter of George Washington University, appeared over at the Social Science Research Network on January 2.  It suggests that the backfire effect -- the tendency of people to double down on erroneous beliefs when presented with factual evidence they're wrong -- might not be as pervasive as we'd thought.


Can citizens heed factual information, even when such information challenges their partisan and ideological attachments?  The “backfire effect,” described by Nyhan and Reifler (2010), says no: rather than simply ignoring factual information, presenting respondents with facts can compound their ignorance.  In their study, conservatives presented with factual information about the absence of Weapons of Mass Destruction in Iraq became more convinced that such weapons had been found.  The present paper presents results from five experiments in which we enrolled more than 10,100 subjects and tested 52 issues of potential backfire.  Across all experiments, we found no corrections capable of triggering backfire, despite testing precisely the kinds of polarized issues where backfire should be expected.  Evidence of factual backfire is far more tenuous than prior research suggests.  By and large, citizens heed factual information, even when such information challenges their ideological commitments.

The encouraging thing about this is that it suggests ignorance is curable.  The initial studies  -- that strong, but incorrect, beliefs were damn near unfixable -- were nothing short of crushing.  When I first read the research by Nyhan and Reifler, my initial reaction was, "Why the hell am I bothering with this blog, then?"  (Not, I hasten to add, that I think I'm always right, or something; but since this blog's overarching theme is sussing out the truth by evaluating the evidence skeptically and dispassionately, the backfire effect kind of blows a giant hole in its efficacy.)

This recent research, however, gives me a ray of hope.  Novella, in his piece at NeuroLogica, says it with his typical eloquence:


If we passively go with the flow of our identity, we will tend to cocoon ourselves in a comfortable echochamber that will bathe us only in facts that have been curated for maximal ideological ease.  This feedback loop will not only maintain our ideology but polarize it, making us more radical, and less reasonable.

Ideally, therefore, we should be emotionally aloof to any ideological identity, to any particular narrative or belief system.  Further, we should seek out information based upon how reliable it is, rather than how much it confirms what we already believe or want to belief.  In fact, to correct for this bias we should specifically seek out information that contradicts our current beliefs.

My only caveat about this whole thing is that even if the backfire effect is minor and rare, correcting false beliefs depends on people being exposed to the correct information in the first place.  I was just talking with my wife yesterday about the role Fox News has in insulating Donald Trump's diehard followers from accurate information about what he's saying and doing.  It not only shields them from anti-Trump editorializing and political spin; but it winnows out the actual quotes, video clips, and tweets, only giving listeners the ones that put him in a favorable light.  While the rest of the major networks are buzzing about the disastrous interview with Stephen Miller (who John Fugelsang hilariously called "Gerbil Goebbels") and Steve Bannon's implosion and the Michael Wolff book and Trump's asinine and infantile response to it, Fox News is doing a piece on investigating the Clinton Foundation.

Because that is clearly more relevant than what the President of the United States and his administration are doing.

So if people are being shielded from the facts, they never have the opportunity to self-correct, even if the backfire effect isn't as big a deal as we'd thought.

Anyhow, at least this is a glimmer of encouragement that humanity is potentially salvageable after all.  For which I am very thankful.  For one thing, being in a fetal position on the floor is uncomfortable, and confuses my dog, not that the latter is all that difficult.  For another, I kind of like writing this blog, and it'd be a bummer to throw in the towel.
Posted by Gordon Bonnet at 2:08 AM