According to some recent research, I might not have at birth, but I sure do now.  A study, conducted by Yonat Zwebner (which name I am not making up), Nir Rosenfeld, and Ruth Mayo of the Hebrew University of Jerusalem, Anne-Laure Sellier of HEC Paris, and Jacob Goldenberg of Columbia University, found that the old idea that people are named to match their facial features may actually work in reverse -- the name they're given might actually influence their features.

The paper, "We Look Like Our Names: The Manifestation of Name Stereotypes in Facial Appearance," released a few months ago in the journal Attitude and Social Cognition, found a peculiar pattern when they looked at matching names with faces; a person's name apparently subtly alters such malleable traits such as hairstyle, style of glasses, and resting facial expression.  The authors write:

Research demonstrates that facial appearance affects social perceptions.  The current research investigates the reverse possibility: Can social perceptions influence facial appearance?  We examine a social tag that is associated with us early in life—our given name.  The hypothesis is that name stereotypes can be manifested in facial appearance, producing a face-name matching effect, whereby both a social perceiver and a computer are able to accurately match a person’s name to his or her face.  In 8 studies we demonstrate the existence of this effect, as participants examining an unfamiliar face accurately select the person’s true name from a list of several names, significantly above chance level.  We replicate the effect in 2 countries and find that it extends beyond the limits of socioeconomic cues.  We also find the effect using a computer-based paradigm and 94,000 faces.  In our exploration of the underlying mechanism, we show that existing name stereotypes produce the effect, as its occurrence is culture-dependent.  A self-fulfilling prophecy seems to be at work, as initial evidence shows that facial appearance regions that are controlled by the individual (e.g., hairstyle) are sufficient to produce the effect, and socially using one’s given name is necessary to generate the effect.  Together, these studies suggest that facial appearance represents social expectations of how a person with a specific name should look.  In this way a social tag may influence one’s facial appearance.

Which is interesting in and of itself, but it makes me wonder about how this might be reflected in the changing of naming patterns over time, not to mention the other factors that drive name choice -- such as the fact that some names "run in the family."

I can say from experience that it's hard to decide on a name, which probably explains the plethora of baby name books out there on the market.  Parents want something that will be a source of pride for the child, and will give the child a sense of identity.  (Except, apparently, in my own parents' case, as I was named after my dad, something for which I still haven't forgiven them.)  But sometimes, in that search for uniqueness, parents land on a name that falls into the "It Seemed Like A Good Idea At The Time" department.

Which probably explains why a recent study of 3000 parents in Britain revealed the startling finding that twenty percent of parents regret the name they chose for their children. 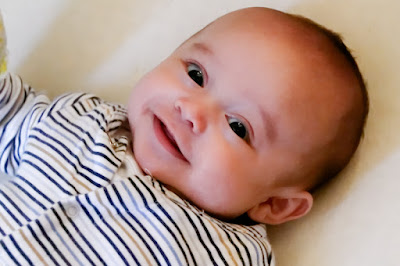 His name is Oliver, but you probably already knew that.  [image courtesy of the Wikimedia Commons]

Even more common names sometimes have their downsides, suggests another study, done back in 2010 by David Figlio of Northwestern University.  Figlio and his team first did phonemic studies of thousands of names, to sort them into "masculine sounding" and "feminine sounding" names.  They then looked at data from schools, and came up with the amazing trend that boys given feminine-sounding names (e.g. Ashley, Shannon) were significantly more likely to cause discipline problems, and girls given masculine-sounding names (e.g. Madison, Morgan) were far less likely to choose academically rigorous courses of study.

This one struck a special note for me.  My grandmother's given name was Bertha Viola, and amongst her siblings were Roxzella Vandell, Orsa Osburne, Flossie Doris, Fanny Elinore, and Clarence Arnold.  Thank heaven their last name was Scott; with an odd-sounding last name, any of those combinations would have been unfortunate indeed.

I find it interesting to consider why the rather harsh-sounding, mostly Germanic names that were in vogue in the late 19th century are mostly gone.  These days you see few, if any, children named Hilda, Ethel, Edgar, Harold, Arthur, Gertrude, Archibald, and so on.  These were amongst the most popular names during the last decades of the 1800s and the first of the 1900s, and yet by the 1950s all of them were virtually gone from the baby name books.  Did parents of that era think that giving a child a strong-sounding name would be an asset in their making their way in the world?  If so, that gives us an interesting insight into the worldview of turn-of-the-century America.

Some names make you wonder what the parents were thinking at the time.  The parents of Chanda Lear, should, in my opinion, be kicked.  I also find myself wondering why parents would choose a relatively common name and then spell it strangely.  I suppose the desire is to impart a sense of uniqueness and individuality to the name, but the sheer inconvenience of it would (for me, at least) outweigh any sense of pride in having a name that has a twist in the way it's spelled.  This seems to be more common with girls' names, for some reason.  Naming a child Khrystee, Liane (pronounced like Leanne), or Erykah -- all monikers borne by former students of mine -- just seems to be asking for a lifetime of having your name misspelled.

However, it's not always the given name that results in a cross to bear for the individual, and a humorous effect for the rest of us.  Working for a registrar's office, one of my first jobs after graduating from college, I ran into transcripts for Turki Hasher, Celestina Crapp, Timothy Turnipseed, Carl Tolfree, and James Hollopeter.  Family allegiance notwithstanding, I can't imagine why Cloyd Dick IV wouldn't change his name.

Then, there's the never-to-be-forgotten woman I heard about because when she got married, it made the national news.  Her maiden name was Phoebe P. Peabody.  She married a guy named Paul Beebe, and decided to go with a hyphenated married name, so she became Phoebe P. Peabody-Beebe.  Which to my ears sounds like Morse Code.  I guess even without the hyphen, she'd still have been Phoebe Beebe, so I guess it's commendable that she decided to go big or go home.

As I mentioned earlier, I rather dislike my own first name, but not enough to go through the hassle of changing it.  But just considering what it would be like to go through life as Basile Bastard or Nancy Anne Seancey or Earless Romero (all real names, I swear) makes me unlikely to complain.  And if you think things are bad now, go back in history, and you run into some truly wacky ones.  My wife's ancestry boasts a woman named Albreda de Brumpton.  My own includes a German dude named Poppo von Rot.  My cousin in New Mexico descends from a Georgia plantation owner named Onesimus Futch.  My son thinks this sounds like an insult. ("You... you... onesimus futch, you!!!")  So, it could be worse.

A great deal worse.
Posted by Gordon Bonnet at 2:18 AM