I try to avoid simply writing day after day about people saying loony stuff, but sometimes I just can't help myself.

That's why today we're going to consider a scientist in Turkey who believes not only that Noah's Ark and the Great Flood were real, but that a 500-year-old man and his kids were able to build a gigantic boat by themselves because they had access to nuclear power, drones, and...

I wish I was making this up.  Yavuz Örnek, who is a lecturer at Istanbul University, admitted during an interview on a talk show that the traditional account was unlikely, but then takes the position that the whole thing becomes plausible if you assume something even less likely.


There were huge 300 to 400-meter-high waves and his [the Prophet Noah’s] son was many kilometers away.  The Quran says Noah spoke with his son.  But how did they manage to communicate?  Was it a miracle?  It could be.  But we believe he communicated with his son via cellphone.

And as far as how the Ark survived the forty-day-long storm, he said it was "built of steel plates" and was "powered by nuclear energy."

Then there's the problem of how Noah got two of each of the nine-million-odd species on Earth on board, not to mention keeping the carnivores from doing what carnivores do: 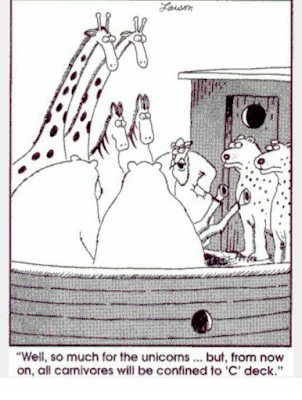 But Örnek has that part solved, too.  He says that the usual picture of the Ark as filled with lots of animals is incorrect; instead, Noah just collected gametes from each species, and stored those.

This brings up a couple of questions:
But don't worry about that, Örnek says.  "I am a scientist," he reassures us.  "I speak for science."

As Hemant Mehta points out over at the wonderful site Friendly Atheist, this was hardly the first time that the host of the show, Pelin Çift, had to listen to so-called experts spouting off bizarre theories.   While interviewing Turkish theologian Ali Riza Demircan last year, she collapsed into helpless laughter when Demircan explained that there were certain kinds of sex that were forbidden to devout Muslims, including "oral sex in advanced dimensions."

Whatever that is.  Although I have to admit it sounds like it could be fun.

Which would mean the vast majority of us guys would be saddled with hand-babies in heaven.  Or hell.  Or wherever we're going to end up.

But back to Yavuz Örnek, he of the steel-plated nuclear-powered Ark filled with tubes of eggs and sperm, wherein the captain can communicate with the rest of the crew via cellphones.  What gets me about all this is that saying this stuff doesn't get him laughed out of the country, or at least out of his university.  To be fair, it's not that much weirder than what the American young-earth creationists claim, and they're still widely regarded as intellectually respectable.  (Hell, the whole faculty of Liberty University believes that stuff.)

In any case, all of this proves that there's no idea so completely ludicrous that you can't embellish so as to make it way stupider.  And it also means that, as unlikely as it seems, we have a creationist who is even more ridiculous than Ken Ham.

Which, honestly, is kind of a miracle in and of itself.
Posted by Gordon Bonnet at 3:31 AM