It is a never-ending source of amusement to me how easy it is to get the conspiracy theorists' knickers in a twist.

The latest example of this surrounds the launch on January 12 of a United Launch Alliance Delta 4 rocket from Vandenberg Air Force Base in California, carrying the top secret NROL-47 satellite.  From this you can see that the phrase "top secret" is a bit misapplied, here, given that everyone up to and including the folks over at Mysterious Universe knows the satellite was launched.

On the other hand, nobody much knows what it does, so the sobriquet is appropriate at least in that sense.  "NRO" stands for "National Reconnaissance Office," which is a branch of the Department of Defense that oversees the network of spy satellites, but other than that, not much is known about it.

So far, no problem, given that the United States launches surveillance satellites pretty much every other week.  But what sets this one apart -- and what has the conspiracy theorists experiencing multiple orgasms -- is the logo for the mission: 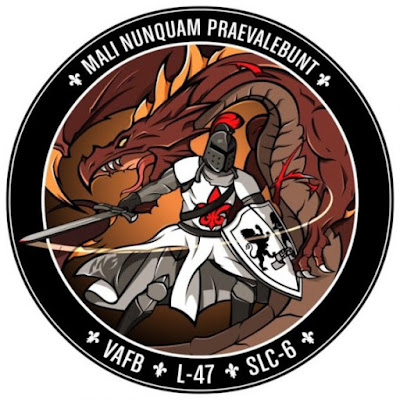 Well, to a conspiracy theorist, this is considered tantamount to an admission by the NRO that "we are an arm of the Illuminati."  On the other hand, the slogan, "Mali Nunquam Praevalebunt," is Latin for "Evil Shall Never Prevail," which sounds to my ears like a pretty positive message, for Fiendish Agents of the New World Order.

Maybe they're trying to improve their image.  I dunno.

Paul Seaburn, over at Mysterious Universe, weighs in on the topic:


[T]he logo shows a Knight Templar waving his sword as he battles with a dragon...  Why a Knights Templar symbol and what evil is this high-flying knight being sent to battle?...  Why, if it’s a secret spy satellite, would the NRO call attention to it with the sinister slogan and symbol?  “Evil will never prevail” has obvious biblical connotations — here’s a similar passage in Psalms 21:11: “Though they intended evil against You and devised a plot, They will not succeed.”  Then there’s the Knights Templar – warriors of the Crusades , protectors of the finances of the Catholic Church and possible guardians of the Holy Grail.  Who is the NRO sending this kind of message to?

The dragon is an obvious symbol of China and that country has been launching spy satellites of its own recently, but so have Russia, Japan and India.  What’s on THEIR mission patches?  Could it mean something else?  Are these nations building a satellite wall against some ‘evil’ dragon flying in from somewhere else?  In the galaxy?  Or beyond?  Why are they calling it “evil”?

And why in Latin?  Have the powers that be already received an alien message in Latin?

There are a variety of questions I have about this claim, not the least of which is, "Is your skull filled with cobwebs and dead insects?"  Here are a few that I can think of right off the bat:
You know, the insignia of this mission makes me wonder if the Department of Defense knew perfectly well what kind of effect this would have on the Alex Joneses and David Ickes of the world, and decided to do it deliberately.  In other words, they're fucking with us.  If this is the case, all I can do is doff my hat in their direction, and bow down to their superior trolling ability.

But even if that's not the case... you people really need to calm down.  Whatever NROL-47 is about, I can pretty much guarantee that it's not a Templar weapon to combat an evil Latin-speaking Chinese dragon from outer space.  Maybe I'm going out on a limb saying this, but I'm feeling strangely confident about it.
Posted by Gordon Bonnet at 2:00 AM