I've been told I have "resting scowl face."  I can't tell you the number of times I've been walking down the hall in the school and a student has said, "Boy, you look pissed off," or at the very least, "He's on a mission."

It gets worse when I'm concentrating.  My wife has told me that when I'm performing with my band, I have a knitted brow and that my eyes look... "intense."

She always tries to phrase things kindly if she can.

The odd thing is that I honestly enjoy performing, so it's not that I'm having a bad time.  I have a hard time explaining why I do scowl so much of the time, because I'm really not an angry person.

On the other hand, I just realized I was scowling when I wrote that.

The reason all this comes up is some recent research into the connection between facial expressions and endurance while running. Noah E. Brick, Megan J. McElhinney, and Richard S. Metcalfe, in a paper called "The Effects of Facial Expression and Relaxation Cues on Movement Economy, Physiological, and Perceptual Responses During Running" that appeared in the Journal of the Psychology of Sport and Exercise last month, found that deliberately relaxing your facial muscles and smiling while on a run actually helps you to move with more economy, resulting in less discomfort and an overall improvement in performance.

As a runner, I found this fascinating.  I'm sure, given that I scowl a large percent of the time anyway, that I must look positively furious while I'm running.  I don't have much photographic evidence of that, however, because there's a natural tendency to mug for the camera when you pass a race photographer.  But I honestly can't imagine the smile lasting for much more than a second or two after the shutter clicks.

What is coolest about this is that the researchers didn't just ask runners for their perceptions before and after, they had them breathe through a mask that measured their oxygen uptake (a good measure of the efficiency of your muscles).  They had four groups -- one that maintained a neutral expression, one as genuine a smile as you can muster under those conditions, one that was instructed to scowl, and one that concentrated on relaxing their entire upper body.  (The last-mentioned group was instructed to pretend that "they were holding a crisp with both hands while they were running and trying not to break it.") 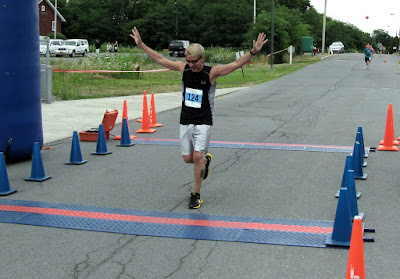 Okay, so maybe I don't scowl the whole time.

The results were astonishing.  The smiling group was 2.8% more efficient than the scowling group, and 2.2% better than the neutral group.  (The relaxed group fell in between the two.)  While this may not seem like much of an improvement, it's equivalent to six weeks of consistent jump training (plyometrics).  And, I might add, it's a hell of a lot more pleasant.  The authors write:


The improved RE [respiratory efficiency] is toward the lower end of the 2%–8% reported for short-term training modes (e.g., Moore, 2016) but is greater than the smallest worthwhile change for RE (2.2%–2.6%) suggested by Saunders, Pyne, Telford, and Hawley (2004).  As such, the improved RE can be considered a real and worthwhile change.  Furthermore, the lower VO2 when smiling is equivalent to the 2%–3% improvement noted by Turner, Owings, and Schwane (2003) following six-weeks of plyometric training in distance runners, and the 1.7%–2.1% observed by Barnes et al. (2013) after 13 weeks of heavy resistance training in male cross-country runners.


So I'm gonna try it.  My first race isn't for a couple of months, given that we're still in the third of the seasons in upstate New York's "four-season climate" (the four seasons are: Almost Winter, Winter, Still Fucking Winter, and Road Construction) and the roadsides are covered with a nice layer of dirty slush.  But I can always try it while I'm training on the treadmill at the gym, although it might make my gym buddy wonder what's wrong with me.

What I find most fascinating about this is to speculate about the cause.  You have to wonder if it's because our expressions are so tied to our emotions -- that perhaps wearing a scowl puts your body on alert for danger, resulting in a combination of discomfort and an increase in adrenaline and the stress hormone cortisol (which would boost the rate at which you burn fuel without necessarily giving you anything back in the form of speed or endurance).  That's all just guesswork, however.

In any case, it's worth a shot.  So if you see a skinny blond guy running down the road in upstate New York wearing a goofy grin, I'm not high, I'm just running an experiment.  Literally.
Posted by Gordon Bonnet at 2:20 AM