Because I'm known around my school as the resident Skeptic Guy, I get into some really weird conversations with students sometimes.  They, like my readers, feel they are duty-bound to tell me the latest bizarre claim they've run across.  I'm certainly appreciative; it means I rarely have to fish around for topics for Skeptophilia.

But it does result in some odd discussions in the hallway.  Like the one I got into last week with a student who asked me if I knew that cats are actually aliens.

At first, I thought I'd misheard him.  "Cats?" I said, attempting to keep the incredulity out of my voice with only partial success.  "Like, meow meow?"

Never let it be said that I do not inject scientific rigor into the questions I ask my students.

"Yeah," he answered.  "Cats.  There's a conspiracy to keep us from finding out that cats are alien spies."

"No, I guess not.  Who knows, maybe I've just made us both the targets of the Cats in Black."

This last bit resonated with me as I was until recently the owner of two black cats.  I use the term "owner" guardedly, as one of these cats in particular made sure to let me know that he was in no way obliged to do what I wanted him to do.  My sense of his personality is that he kind of hated everyone with the possible exception of my wife, and viewed the rest of humanity as barely sentient providers of cat chow and occasional petting.

Sadly, both of our cats died of honorable old age in the last two years, Geronimo (the aforementioned humanity-hating one) at the age of 18.  Or maybe they just teleported back to the Mother Ship.  I dunno.

Anyhow, as usual I felt like I couldn't let an opportunity like this slide, so I googled "cat alien conspiracy."  And despite my initial incredulity, this search was wildly successful, generating just shy of three million hits. 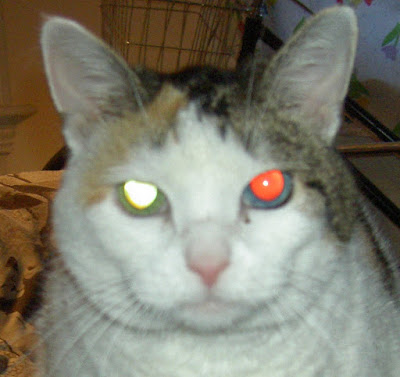 The first site on the list was the aptly-named Cat Alien Conspiracy, which gives us significant details about how our feline house guests are actually spies in disguise.  I am uncertain whether this site is a spoof.  While the rational part of me thinks that, given its content, it would have to be, recall that in my last post we discussed sites claiming that Jesus was an interdimensional space traveler, so I'm reluctant to assume that anything is so impossibly ridiculous that someone won't believe it.

Anyhow, the site is kind of a Wall O' Text, so I'll admit I didn't make it all the way through.  Here's how it begins, though:


Since as far as we know the beginning of man, aliens have been using cats to try to stop us from progressing to the reasonably advanced race that human beings have become.  They do this because they aren't allowed to directly kill us, however they don't want us to catch up to them or even become as advanced as their race.

The aliens originally took the approach of placing large cats like tigers, lions, jaguars, etc.  Here to kill off our ancestors to slow us down before we even had a chance to start.  This back fired on them, though it did kill off a lot of them that had intelligence however not the muscle needed to actually use the weapons that they were trying to invent.  They did not kill all of them and we managed to push forward.

Myself, I find this an odd way to try to wipe out a less-technological species.  They're superpowerful aliens, right?  Seems like stirring up a massive storm or earthquake would be a lot more efficient, unless you could combine the two and make, like, a Catnado.  That would be terrifying, but also kind of awesome.

Anyhow, the big cats didn't succeed, so the aliens decided to use their smaller cousins to keep an eye on us:


At this point they decided the only way to find out how all of this happened was by placing spies.  This is when they left us with a smaller more intelligent form of cat to watch, learn, and hopefully even do somethings to sabotage the humans technological growth.  They gave them specific instructions, to act cute, go in to the areas that the humans lived in and allow them to think that they had domesticated them like they had domesticated dogs long ago.  They equipped them with telepathy abilities so that they could both communicate the reports to the aliens, which try to be invisible to us however with some of us they fail and appear to be ghosts.

We also learn that cats like to sleep in the sun because they are "solar-powered," and the reason they try to get between you and your computer monitor is because they are "reading what's on the monitor for their own purposes."

But this is far from the only site about this claim.  Vice did a piece on it a while back, called, "Are Cats Spies Sent by Aliens?" by Austin Considine.  In this article we find out that one of the main pieces of evidence for cats being of alien origin is that the Egyptians called them "gifts of the gods."  Also, scientists "are baffled as to how purrs are produced," and their almond-shaped eyes look just like the huge and terrifying eyes of your typical Gray Alien.

The cats' eyes, not the scientists'.

Oh, and when your cat jumps up and suddenly runs out of the room, it's because (s)he just got a transmission from Feline Mission Control and doesn't want to respond to it while you're around.  Kind of the Space Cat version of hearing the "you've got mail" ding on your computer.

Anyhow.  That's just scratching the surface, but frankly, I think that's all I want to do.  My own experience with cats does not support the idea of their being aliens.  They're more like dubiously-useful home decor items that poop in a box in the laundry room.  I kind of like the big cats -- if I had to pick a favorite animal, I think it'd be the jaguar -- but even they strike me as your usual terrestrial mammal, not a denizen of the planet Gzork.

So that's the result of my latest conversation with a student.  I hasten to add that he himself doesn't think cats are aliens, he just wanted me to know that there are people who do.  Frankly, I'm beyond being surprised by this.  It does make me wonder what other animals might be of extraterrestrial origin.  Personally, I'm suspicious of possums.  Although you'd think that superpowerful alien spies who had crossed intergalactic space would be better at avoiding moving cars.
Posted by Gordon Bonnet at 2:17 AM