Sometimes I sow the seeds of my own facepalms.

It happened just yesterday, when on a lark I clicked on the link to Skeptophilia's Google data, to see how people have been arriving here.  And one of the search queries that got four people to Skepto was...

... "was Jesus from an alternate universe?"

My first thought was, "I don't think I've ever written about that."  And scanning down the first two pages of hits (there were over 314,000 hits, something I don't even want to think about), I didn't see a link to my blog.  So either it was further down the list, or else they took a circuitous route to get here.

My second thought, of course, was, "What the actual fuck?  Four people wanted to know if Jesus was from an alternate universe?"  Given the number of hits, however, the amazing thing is that there weren't more of them.  Evidently, the idea of Jesus as having side-slipped here through a rip in the space-time continuum is something that has come up more than once. 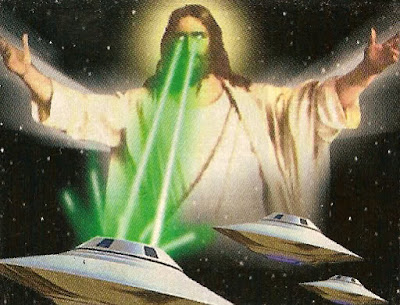 Something else I found in my Google search.  I was going to respond to this image, but after sitting here for some minutes, I got nothin'.

I share a besetting sin with Rudyard Kipling's "Elephant's Child," namely, an insatiable curiosity.  So even though a part of my brain was shouting at me that I did not want to go down this particular rabbit hole, I started clicking on the links on the first page of the Google search.

And all I can say is: merciful heavens, do people have no critical faculties at all?

Well, okay, as you might expect, that's not actually all I have to say.  In fact, in the interest of sharing the experience, I'm going to tell you about a couple of my better finds from the realm of Star Trek Jesus.

First, we have an article that appeared in (I shit you not) Huffington Post called, "Is Jesus in a Parallel Dimension?"  This brings up my pet peeve, which is the way woo-woos use "dimension" to mean "a world we can't see," when in reality it means, "a measurable extent in physical space."  So when the author, Dustin DeMoss, asks if Jesus lives in another dimension, it leaves me picturing the Lord and Savior as inhabiting, for example, "width."

But that's a mere quibble.  DeMoss explains what he means, as follows:


We live in four dimensional space while quantum physics suggest there are 11 dimensions.  We understand one instance of time as it is always going forward but in the Bible it says that God experiences time like this, “a thousand years in your sight are like a day that has just gone by.” (Psalm 90:4)...  Jesus could materialize and dematerialize while his body was still tangible (Luke 24:39-40, John 20:19, 26) and he could foretell the future (Matthew 24).  He suggested parallel realities open up to us, “For where two or three are gathered together in my name, there am I in the midst of them.” (Matthew 18:20)

But this is far from the only source weighing in on this topic.  We have the delightfully loopy site Echoes of Enoch, wherein we read the following:


What if I could show you that the Bible tells us and Jesus alluded to the very fact that this mortal life, our linear existence is actually an altered dimension separated from the eternal one and yet existing at the same time!  Sounds too weird?  Consider just what the scripture above is saying.  Our past and our future have already been, and God requires an account of what is past!  The implication is that to God everything is already past history and he requires an account for it all!  It is not that God, sitting up in eternity has the plan all figured out and knows what he will do, it’s already been done!  You can’t hedge around this one.

This site also has a highly entertaining passage about how the Serpent got cursed to slither around after tricking Adam and Eve into eating the forbidden fruit, a small part of which I excerpt below:


He [the Serpent] is said to be subtler that all the other creatures created by God.  Subtle means intelligence applied in a crafty or manipulative manner.  This certainly is not talking about the reptile we know as a snake.  In Gen 3 we get the illustration that because the serpent deceived Adam and Eve he would be made to crawl on his belly and eat dust for the rest of his life.  Again by going back to the original language and redefining these words in light of 21st century knowledge, the story takes another very realistic twist.  The Hebrew, "al gachown yalak" for upon the belly and life can actually mean, "from above a reptile, (as superior) from the issue of the fetus as being outside the belly you will continue on in your material life."  Only in modern times could this scripture be understood for what it might imply.  A superior reptilian form that carries on life outside of normal reproduction can be by the means of cloning!  A seraphim is an order of angelic being.

Right!  Sure!  I mean, my only question would be, "What?" It does, however, put me in mind of a possibly apocryphal story about some scholars of the works of John Milton who were discussing how the Serpent got around prior to being cursed, and one of them suggested that he may have bounced on the coiled end of his tail.

Another scholar exclaimed in outraged tones, "Satan is not a fucking pogo stick!"

Last, we have the site Hidden Meanings weighing in on the topic.  The guy who writes for this site evidently knows a little science, but takes it and soars right out into the aether with it.  "Cosmology is not science," he states.  "It is a pagan philosophy."  As for as what we should believe instead, besides (obviously) the bible, we're told that quantum entanglement means that if you tickle one of a pair of twins, the other one will laugh, which then clearly leads us to the story of Jacob and Esau, as I'm sure you could have predicted.

After that, it gets a little weird.

So, there you have it.  Jesus in space and entangled twins from the Book of Genesis.  Which will teach me to try to track down how people arrive here at my blog.  I guess I should be glad that, however they got here, they did finally make their way, but I honestly don't want to know how many folks came away still believing that the Ascension had anything to do with quantum indeterminacy.
Posted by Gordon Bonnet at 3:32 AM