Long-time readers of Skeptophilia may recall that a while back I did a post on the mysterious and beautiful Voynich Manuscript, a 15th century illustrated codex that has page after page of writing in an unknown orthography.  The manuscript, which is named after Polish book seller Wilfred Voynich, who purchased it in 1912, had resisted all attempts to decipher, decode, or translate its text -- or even give any certain information that it was meaningful writing.  The failure of the world's best cryptographers and linguists to make sense of it was, to me, a good indication that it was pretty but random -- i.e., most likely a Renaissance-era hoax.

Because, after all, the linguists are pretty damn good at what they do.  They even eventually succeeded in translating the odd Linear B script from Crete, when there was no certainty even as to what language it represented, or whether the symbols corresponded to words, syllables, or single sounds.  (The success was mostly due to the efforts of the brilliant Alice Kober and Michael Ventris; if you're interested in finding out more, I highly recommend the book The Riddle of the Labyrinth by Margalit Fox, which is fascinating reading.)

Anyhow, the Voynich Manuscript proved to be an intractable problem, which is why it became a favorite of woo-woos who think that The Da Vinci Code is non-fiction.  It even inspired one guy, Veikko Latvala of Finland, to attempt a translation from "divine inspiration," producing results that sounded like what you'd get if Charles Darwin had attempted to write The Golden Guide to Flowers while on an acid trip. 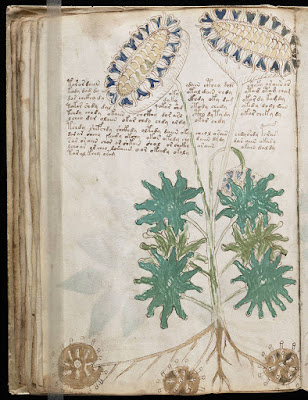 My sense was that it was probably destined to stay in the "intriguing but unsolved" column for the foreseeable future.  So I was pretty shocked when a friend and former student sent me a link a couple of days ago about some computer scientists at the University of Alberta who have used a decryption program on the text...

... and have found out that the manuscript is probably written in an encrypted form of Hebrew.

I say "probably" because at this point the scientists, Greg Kondrak and Bradley Hauer, have only the preliminary findings that the script is consistent with Hebrew, and a small piece of it has been translated into a sensible sentence, “She made recommendations to the priest, man of the house and me and people."

Which is a little odd, but it's better than the nonsense Latvala came up with, divine inspiration or not.

Kondrak says that 80% of the words they've translated are in the Hebrew dictionary, which is pretty good evidence they're on to something.  He and Hauer are hoping to team up with scholars of ancient Hebrew to try a complete translation. 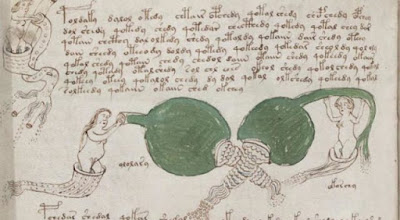 So it looks like a long-standing mystery may, finally, have been solved.  The paper which details their findings, "Decoding Anagrammed Texts Written in an Unknown Language and Script," appeared in Transactions of the Association for Computational Linguistics.  So look for further developments soon -- with luck, either confirming their results and delving into translation, or a retraction if this turns out to be a blind alley.  In either case, it's nice to know that people are still working on one of the most enduring puzzles in linguistics.
Posted by Gordon Bonnet at 2:08 AM