I can't tell you the number of times I've looked at something my fellow humans have done and thought, "Who does that?"  Or, more to the point, "What the hell is wrong with you?"  Whereas with dogs, I usually (1) can tell from their body language what they're thinking and feeling, and (2) understand why they did what they did.

Even when they are aggressive, bite or attack people, their behavior is almost always consistent and explainable -- and predictable if you can read dog body language.

Angie Johnston, a Ph.D. candidate who works at the Canine Cognition Center at Yale University, agrees.  Her doctoral research has to do with the human/dog bond, and using facial and body language cues to understand what dogs are thinking.  She's working with Kathy Shae, of the Paws-n-Effect Canine Training Center, to work with and observe dogs interacting with strangers, their owners, and each other, in an effort to parse the mysteries of the canine personality.

Her studies and those of her colleagues have found that dogs release oxytocin, a hormone associated with bonding and love, when they're with their owners.  "When you see the same hormone released in dogs and families that are released in humans and infants, it suggests that some really similar things are going on," she said.  "So, I think dogs do love us...  It’s something dogs have developed and as they have lived with us, it has grown into true love."

Shae highlighted the uniqueness of the human/canine bond.  "It’s intuitive for them, it’s nonverbal and it’s empathetic in its purest sense," she said.  "Historically, humans and dogs have been partnered for tens of thousands of years, and of the 20,000-plus species on the Earth, dogs and humans have had a unique relationship...  There’s some connection there that’s incredibly, incredibly deep.  I think we’ve lost empathy and they’ve gained empathy in an evolutionary sense, and that’s why we’re partnered."

The fact that this study, which is still incomplete and has not yet been published, was the subject of a news story this week is timely.  In the last couple of weeks, my wife and I have been perusing the listings over at PetFinder, a wonderful service that acts as a clearinghouse for animals who are available for adoption at various shelters in your area.  We met some dogs who were clearly wrong for completely prosaic reasons -- a couple of boisterous puppies who played a little too roughly for our sweet, gray-around-the-muzzle coonhound Lena, for example.  There was one tragic pit bull mix, gorgeous, but so afraid of people that he couldn't be trusted not to bite -- we had to meet him through a chain link fence, and even then he snarled and snapped at us.

Most interesting was a beautiful, blue-eyed cattle dog mix who wasn't aggressive at all, but just -- disconnected, uninterested in interacting with us.  Out on a leash, he was focused on smelling everything in our path (not that unusual), but there was something about his body language that was off.  He paid no attention at all to either of us, not just in the sense of obeying commands (that stuff can be taught), but as far as any curiosity about us.  My doggie intuition said, "No, he's not going to work out well."

Then we met a big, loping black lab/Akita mix.

He was, we were told, a little shy, especially around men.  They let him out into the meet-and-greet room, and he walked right up to me and gave me a big lick in the face.  The trainer's eyebrows went up.

Then we brought in Lena, so she and Big Black Dog could see if they liked each other.  They did the obligatory mutual butt sniff, and both tails started wagging.  Second box checked off.

Best of all, he was clearly focused on us, and very curious about these two strangers who were leading him around.  It didn't take us long to come to a decision.  There was something about him that just clicked.  My second sense about dogs said, "He's the one."

So without further ado, allow me to introduce:  Guinness. 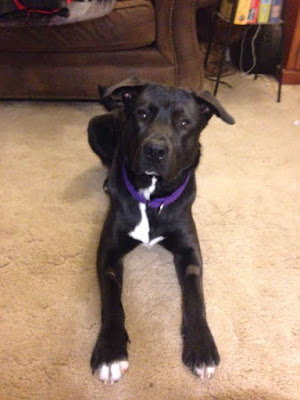 We've had him for less than 24 hours, and already he's played a rollicking game of chase in the back yard with Lena (she's been in a positive depressive state since her buddy, our adorable rescue mutt Grendel, died a couple of months ago; this is the happiest I've seen her since that happened).  He's chased squeaky tennis balls 17,839 times across the living room floor (and counting).  He's already learning a few commands -- we're signing him up for obedience training soon, and hoping that brain-wise, he's inherited more from his Akita ancestry than his black lab.  He is a little skittish, still -- the shelter manager didn't give us details about his past (probably a good thing) but just said he "wasn't treated very well" by his former owners.  He startles if you reach for him suddenly, but that's another thing I can tell he'll learn to get past with some love, affection, and a safe warm home.

So I think my doggie intuition has chalked up another win.  He's a good 'un, as my grandma used to say.

But now I need to go, because he just walked into my office with a squeaky tennis ball.  Some things take priority, you know?
Posted by Gordon Bonnet at 2:06 AM