A famous skit from the early days of Saturday Night Live had a stereotypical married couple (played by Dan Aykroyd and Gilda Radner) arguing over whether a particular product was a floor wax or a dessert topping.  After a moment, Chevy Chase steps in and says, "No need to argue!  New Shimmer is a floor wax and a dessert topping."

The couple gives the camera a big smile.  "Tastes great!" one of them says, and the other adds, "And look at that shine!"

I thought about New Shimmer a couple of days ago when my younger son, who has a fantastic eye for wacko ideas, found a claim online that resolves the Flat Earth/Oblate Spheroid Earth controversy by saying no need to argue... it's both flat and a sphere.

How can that be, you might be asking?  That's certainly what I asked.  I mean, the whole raison d'être of the Flerfs (as I have come to call the Flat Earthers) is that the Earth is a flat disc with no curvature whatsoever, in many iterations bounded by an ice wall that the rest of us call the continent of Antarctica (and which the Flerfs apparently believe is what keeps the ocean from pouring off the edge).

But no, says this new claim.  The reason that the Earth looks flat to the Flerfs is that we are only living on a tiny bit of it, and a tiny bit of a sphere looks, for all intents and purposes, flat.  But in reality, we're on a sphere -- just a much larger sphere than any of us, including the astronomers, realize.

If you're having a hard time picturing this, so was I, until Nathan sent me a diagram.  So without further ado, I unveil to you the latest version of the Flat Earth Theory: 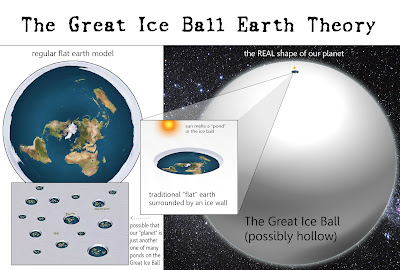 That, my friends, is one huge ball of ice.  But it all makes sense, they say -- don't get all technical on us and claim that such a huge planet would have an enormous gravitational pull, comparable at least to Jupiter's -- because, as the diagram clearly tells you, the ice ball is "possibly hollow."

And I realize that the inset in the lower left hand corner is probably too small for you to see clearly, so allow me to elaborate.  The Earth, it claims, might be just one of many "ponds" in the ice ball.  So this could account for all sorts of things, like UFOs, which wouldn't have to cross interstellar space, they'd just have to sail around the ice ball until they found a hospitable looking "pond."

And given that this is upstate New York in February, it has actually looked a bit like we're sitting on a giant ice ball lately.  So maybe there's something to this after all.

In either case, I suppose this ends the Flat Earth/Oblate Spheroid Earth argument.  It's kind of a shame, because there were parts of it I was rather enjoying. 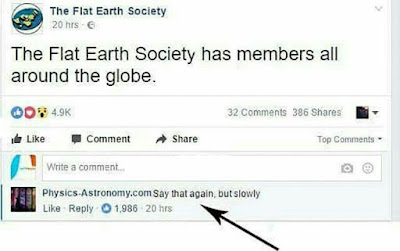 In any case, that's the latest from FlerfLand.  Now y'all will have to excuse me, because I'm gonna go get a bowl of ice cream.  I sure hope I have some floor wax left.  It's just not the same without it.
Posted by Gordon Bonnet at 1:57 AM