Sometimes it's reassuring to know that the wackos aren't confined to the United States, although I will admit up front that we seem to have way more than our fair share of them.

My reason for saying this is a story about a government official in Iran who has apparently been doing sit-ups underneath parked cars.  His name is Hassan Firouzabadi, and he is a retired ophthalmologist who is currently Senior Military Adviser to the Supreme Leader of Iran, Ayatollah Ali Khamenei.  Firouzabadi was being questioned by the press about the death of Kavous Seyed-Emami, who had been head of the Persian Wildlife Heritage Foundation.  The official story was that Seyed-Emami had committed suicide in prison after being picked up by the police in January on charges of espionage.

Seyed-Emami's arrest and death are certainly suspicious.  The Wildlife Heritage Foundation has connections to Morad Tahbaz, an Iranian-American businessman whose wealth predates the Iranian Revolution and who is therefore suspected of being anti-government.  The powers-that-be, however, say that Seyed-Emami killed himself because he was guilty and was afraid of punishment.

"This person was one of the accused," said Tehran's chief prosecutor Abbas Jafari Dolatabidi, "and given that he knew there were many revelations against him and that he himself had made confessions, unfortunately he committed suicide in prison."

Tragic, and almost certainly further evidence of the Iranian government's determination to squelch dissent, but otherwise not far out of daily business for the Middle East.  But there's another top Iranian official who was a little more forthcoming.  Seyed-Emami was not just an ordinary dissenter, nor even an ordinary espionage agent.

He was a spy who used trained lizards to detect uranium deposits and nuclear missile sites, and then passed along the information to the Israelis. 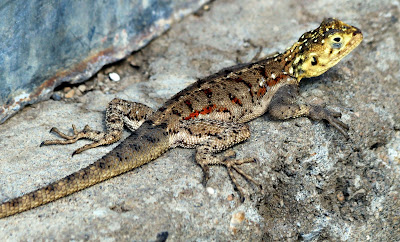 Look at those beady eyes.  Would you trust this guy?  I didn't think so. [Image courtesy of the Wikimedia Commons]

This statement came, in all seriousness, from the aforementioned Hassan Firouzabadi, Senior Military Adviser to the Ayatollah.  What Seyed-Emami was doing was using the natural ability lizards have to "attract atomic waves" (whatever the fuck those are), with evil intent:


In their possessions were a variety of reptile desert species like lizards, chameleons…  We found out that their skin attracts atomic waves and that they were nuclear spies who wanted to find out where inside the Islamic Republic of Iran we have uranium mines and where we are engaged in atomic activities.

Needless to say, this is idiotic.  Lizards respond to being around highly radioactive materials pretty much like any other life form does, namely by dying.  If you're trying to find out where the radioactive stuff is, there's an easier way.

It's called a "Geiger counter."

But facts seldom matter to people like Firouzabadi, who sounds like he should find some like-minded souls over at InfoWars, Before It's News, and the Flat Earth Society.  As far as Seyed-Emami, my guess is that he was tortured while in jail -- it seems pretty common practice in Iran -- and under that kind of duress, confessed to whatever they were asking of him.

To the rest of us, though, this is more evidence that getting into a high position in government does not necessarily mean you're smart, or even in contact with reality.  As for Firouzabadi, sounds like he'd be best off if someone patted him on the back, said, "There, there," and sent him off to resume picking at the straps of his straitjacket with his teeth.

Of course, I can say that.  I'm safely over here in the United States.  On the other hand, this is the home of Alex Jones, David Icke, Ann Coulter, Sean Hannity, and Donald Trump.  So maybe I shouldn't act so superior after all.
Posted by Gordon Bonnet at 2:54 AM