I know I've said it before, but I hate the way media represents science (and hooks readers with inaccurate, misleading clickbait titles).

I ran into a good example of this, and saw numerous examples of people coming to the wrong conclusion because of it, in Business Insider a couple of days ago.  The article was called "A Chemical Used to Make McDonald's Fries Could Help Cure Baldness, Japanese Scientists Say," by Rosie Fitzmaurice.  And you'd think people would realize that saying that a chemical in McDonald's fries can help with baldness is not the same as saying eating McDonald's fries cures baldness.

You'd be wrong.  As of this time, I've seen four people crowing about how their diet of Big Macs and large fries is going to make them keep their hair (or grow it back), and one that, no lie, proposed rubbing McDonald's fries on your head. 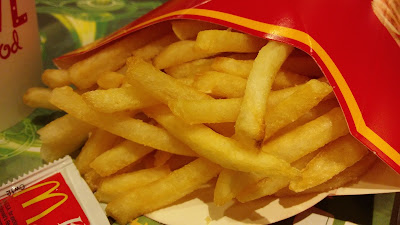 What's worst about all of this is that if you read the actual research, you find out that the chemical in question -- dimethylpolysiloxane -- isn't even what's stimulating the hair growth in the lab mice, it was merely used as an inert matrix in which to grow the stem cells that produced hair follicles.  (If you're curious about how it's ending up in french fries, it's because it's used as an anti-foaming agent in the cooking oil.)

So the article's bad enough, but along with the ridiculous title, it amounts to "How to completely misunderstand some scientific research in under five minutes."  It reminds me of the moronic article that appeared a couple of years ago over at (surprise!) Fox News Online called, "Study Says Smelling Farts Can Be Good for You."

I hope I don't need to tell you that no, that's not what the study found.  If (once again) you go to the actual research, you find out that one of the chemicals in farts (hydrogen sulfide) is also used in vanishingly small amounts as an intercellular chemical signal.  A new drug candidate called AP39 is showing potential therapeutic use because it causes the targeted release of hydrogen sulfide into your mitochondria, showing promise for treating a lot of age-related disorders that are associated with mitochondrial slowdown or malfunction.

In short: you do not experience the same effect if you take a deep breath when your coworker rips a big one.

Last, we have an article that appeared over at CNN this week (although I've read a bit about this research before) with the title, "Hot Tea Linked to Esophageal Cancer in Smokers, Drinkers," which isn't wrong so much as it is misleading.  This makes it sound -- and the article itself does little to correct that impression -- that a guy like me, who often has a beer or glass of wine with dinner, and likes a nice cuppa in the morning -- is boosting my risk of cancer of the esophagus, one of the deadliest of all forms of cancer.

If you're in the same boat, allow me to put your mind at ease.  What the research actually found was that people who drink "burning hot" beverages of any kind, not just tea, run the risk of esophageal cancer, especially when coupled with the esophageal damage caused by two other bad habits, smoking and heavy drinking.  It's been known for years that smoking and heavy alcohol use are the prime risk factors in what's called "Barrett's esophagus," where the esophagus becomes scarred and partially replaced by tissue similar to the stomach lining -- a condition that often presages cancer.  (Other risk factors are severe untreated or intractable reflux disorder, and being overweight.)  So it's unsurprising that if you already have predisposed yourself to esophageal damage by other habits, you're only going to make it worse by gulping down boiling hot liquids.

Anyhow.  I know I'm accomplishing nothing by bitching about this (what my dad used to call, appropriately enough, "a fart in a windstorm").  But it's really maddening.  If I can reach a few people, and encourage you to find the original research before you buy what the clickbait headline is telling you, that'll be enough for me.