Odd to say, for a veteran high school teacher, but I am not someone who thrives in a noisy, chaotic environment.

I can tolerate it for a while, and then I have a number of (often quite sudden) reactions.  First, I get a jolt of tension, sometimes manifesting as a physically painful clench in my stomach.  Second, I lose the ability to process voices individually -- something that is most striking in a crowded pub, where the voice of the person I'm talking to, sitting right next to, vanishes into a uniform, overwhelming Wall of Sound within which I can distinguish nothing at all.

Turns out I'm not alone.  Some studies in the last couple of years have elucidated the restorative role of silence -- something all too few of us get to experience.  At least when I'm done at school, I can go home to my quiet house on a rural road, and immerse myself in something close to complete quiet.  But I can't imagine what it'd be like to live in a big city.

I think I'd go mad, honestly.

A 2013 study by Imke Kirste et al. of the Research Center for Regenerative Therapies in Dresden, Germany found a neurological underpinning to our desire for silence.  Baby mice exposed to various sorts of noise (music, white noise, the human voice, the vocalizations of other mice) showed, as you would expect, varying responses in terms of growth and interconnectedness of brain cells, levels of stress hormones, and so on.  What was surprising was that the group which was supposed to be the control -- a group of baby mice kept in total silence -- exhibited a statistically significant improvement in growth over any of the others in the number of new neurons in the hippocampus, a part of the brain associated with memory and spatial navigation. 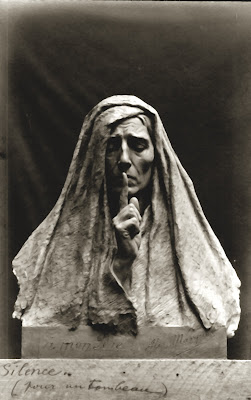 It doesn't just work with mice.  A study by Arline Bronzaft, published in the Journal of Environmental Psychology, found that installing noise-reduction technology in P. S. 93, a public school in the Bronx that was located very close to elevated railroad tracks, resulted in a significant uptick in student reading scores -- and, most tellingly, an equalization of scores in classes on the side of the building facing the tracks with the ones that were further away.

Then there's the study by Allyson Green et al. that appeared in the Journal of Residential and Environmental Public Health in 2015 that went even further, showing that noise was positively correlated with cortisol levels in a gold-mining community in Ghana.  Cortisol is not only a stress hormone, it's a natural anti-inflammatory; repeated long-term exposure to high blood levels of cortisol causes a receptor-weakening effect much like high sugar diet does in type-2 diabetes, with the result that inflammation all over the body increases.  Years of high cortisol levels have been associated with heart disease, ulcers, and arthritis -- so it's hard on you physically, not to mention the obvious psychological toll it takes.

What's most frightening about all of this is how much we've come simply to accept the amount of noise in our lives.  As much as I like listening to music on the radio, sometimes on my way home from work I have to switch it off -- I'm still too overwhelmed by the noise I experienced in the school to subject myself to more sounds (albeit pleasant enough ones) on my drive home.  But I'm struck then by how much noise the tires and engine make.  Even when we think we're in quiet, we seldom actually are -- and we view it as inevitable and unavoidable.

And we're so often unaware of it.  Look at how instantaneously you're aware of it when the power goes out, even in the daytime.  The sudden cessation of the noise of heaters, refrigerators, air conditioners, and so on can be as startling as a thunderclap.

It's getting worse, too.  Studies have concluded that the amount of ambient noise doubles roughly every thirty years -- outstripping population growth.  A 2015 study by Matthew Zawadski, Heather Costigan, and Joshua Smyth of Pennsylvania State University found that test subjects had a lower cortisol spike in their saliva (an indicator of stress) if they had a period of quiet and leisure prior to a high-stress activity (such as giving a speech to an unfriendly audience).  Being around turmoil and noise for extended periods of time leaves us less able to cope with the difficulties, large and small, that we face every day.

Me, I'm all about giving a try to having more silence in my life.  Maybe you'll give it a try, too -- turn off the radio, take out the earbuds, find a way to get out of the chaos of the city for a while.  Let me know what happens -- if the studies are correct, it should do you nothing but good.
Posted by Gordon Bonnet at 2:04 AM