At the risk of beating a dead horse, can I implore you to avoid whatever appears on Gwyneth Paltrow's aptly-named site Goop?

I know we've been here before, and frankly, after the episode of the "psychic vampire repellent" she was selling last fall, I thought I was done with her.  But thanks to a reader of Skeptophilia, I am reluctantly forced back to "Goop" to consider the concept of:

Yes, I know that last summer a woman died from the effects of having an extract of turmeric (curcumin) delivered into her vein by an IV, ostensibly to treat her eczema.  Yes, I know that there is a good reason why your average bloke off the street isn't allowed to jab a needle into your circulatory system and inject some random compound.

No, this does not appear to bother Gwyneth.

She tells us about lots of places where we can go to get these "natural alternative" IV treatments for everything from migraines to (I shit you not) hangovers.  Why the better "natural alternative" to hangovers is to stop drinking so damn much alcohol, I don't know.  Be that as it may, we are given a smorgasbord to choose from. 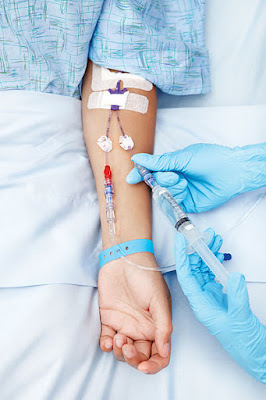 There's the "IV Doc," which has not only "partnered with Goop" but has expanded overseas so "you can now get a refreshment sesh in London or a much-needed hangover fix in Ibiza."  Gwyneth tells us that this one's especially good because it's "managed by physicians," which makes it sound like this is unusual and should put you on notice that the bottom of the barrel here is very, very deep.

Then there's "VIVAMAYR" of London, England and Lake Worth, Australia, which can "reset your digestive system" and also specializes in "oxygen therapy."  "Oxygen therapy," which involves introducing into your body one way or the other a higher concentration of oxygen than you are generally exposed to, is pretty clearly snake oil -- in fact, breathing oxygen-enriched air is, for a healthy individual, fairly dangerous due to oxygen's reactivity with organic materials.  (It is, unsurprisingly, what chemists call a "strong oxidizer," which means that it's good at grabbing electrons away from other molecules -- which in the case of organic compounds, generally makes them fall apart.)

Then there's the amusingly-named "NutriDrip" of New York City, which offers you four different choices of stuff to put in your IV -- under the categories "Immunity," "Toxins," "Beauty," and "Performance."  The word "toxin" immediately sets my teeth on edge, and I challenge you every time you hear someone talk about "detox" or "flushing out toxins" to demand to know one specific toxin that they're referring to.  That's it.  One.  A single compound that your liver and kidneys are incapable of handling, so you need to take purified extract of papaya seeds or some such nonsense to take care of it.

Let me know what they say.

Then there's "IV Vitamin Therapy" of Los Angeles, which not only has various combos of stuff to put into your IV bag, has flat-screen televisions and lots of books to distract you from your infusion of snake oil.   In New York City, however, they have "House Call Aesthetics," which can bring the snake oil right to the comfort of your own home.

There are probably readers who are still on the fence, or who doubt my credentials to make these sorts of criticisms.  As far as the latter, I admit you are right to ask; I'm a biology teacher, not a medical professional.  So perhaps you'll give more weight to Scott Gavura, a pharmacist who has acted as an advisor on new drug development in Ontario, and who wrote the following for the wonderful site Science-based Medicine:


With so many purveyors of vitamin infusions, one would hope the practice was grounded in good science.  But it isn’t, and that shouldn’t be a surprise.  Despite the lack of good evidence, there is a near-obsessive devotion to touting the benefits of intravenous vitamins while railing against the mysterious entities which are blocking The Truth.  But the reality is more mundane.  In the absence of a deficiency, vitamin infusions don’t do much of anything.  To the worried well, intravenous vitamins are going to be a harmless panacea that just succeed in enriching the revenues of the purveyor.

In any case, it's clearly unwise to buy something (literally or figuratively) from someone who has the track record for veracity of Gwyneth Paltrow.  Myself, I'm going to keep taking vitamins the regular way -- from a good diet -- and avoid "Goop's" recommendation to have some random substance injected directly into my bloodstream.  Call me overcautious, but there you are.
Posted by Gordon Bonnet at 2:06 AM