The necessity of dissent

As soon as I saw that the students at Marjory Stoneman Douglas High School in Parkland, Florida, had gained national attention for their outspoken and articulate statements on changing gun laws, I was waiting for the backlash to start.

Maybe I'm cynical.  A more optimistic person might have thought that people would say, "I'm glad these kids are getting involved and being vocal, even if I don't necessarily agree with what they're saying.  This kind of participation is what democracy is all about!"

A more optimistic person would have been wrong.

First there's Lucian Wintrich over at Gateway Pundit, a wildly pro-Trump site that despite its established "white Christians first" agenda was granted White House credentials over respected members of the mainstream media.  Wintrich noted that one of the students, David Hogg, was the son of a man who works for the FBI.  From there, he says, there's only one possible conclusion:


Hogg appears to have been coached on anti-Trump lines...  He seems articulate and highly skilled at setting a new anti-Conservative/anti-Trump narrative behind the recent school shooting...  Allow me to point out that this type of rapid media play is rare and, only comes from well-trained political operatives and MSM commentators...  Why would the child of an FBI agent be used as a pawn for anti-Trump rhetoric and anti-gun legislation?  Because the FBI is only looking to curb YOUR Constitutional rights and INCREASE their power.  We’ve seen similar moves by them many times over.  This is just another disgusting example of it.

The next to chime in was none other than Alex Jones, who under Trump has somehow recovered enough credibility to continue his blithering every day over at InfoWars.  Jones went even further than Wintrich, saying that the massacre itself was the fault of the Democrats:


Wow, we said the perfect false flag would be a white nationalist attacking a multicultural school as a way to make the leftists all look like victims and bring in gun control and a war on America’s recovery.  And now right on time what we’ve been warning of, their main card, the thing we said was imminent, appears with all the evidence.

But it wasn't just dubiously sane members of the far-right media that weighed in.  The latest to slam the survivors of the shooting was former Representative Jack Kingston of Georgia, who in an interview on CNN called the students "stooges for left-wing groups who have an agenda."

Alisyn Camerota, who was interviewing Kingston, responded in astonishment, "Jack, I’m sorry. I have to correct you.  I was down there.  I talked to these kids.  These kids were wildly motivated."  But Kingston refused to back down.  The day after the interview, he tweeted about the planned rallies for gun law reform: "O really?  'Students' are planning a nationwide rally?  Not left wing gun control activists using 17yr kids in the wake of a horrible tragedy?"

So let me get this straight.  Kids this age are allowed to use guns.  Only a year older, and they're not only allowed to purchase guns, they're allowed to vote, not to mention join the military and risk their safety and lives to protect this country.  But at the same time, no way could a young adult have a valid and well-thought-out reason for holding a belief.  If they disagree with the party line, it can't be because of a strongly-held and justified opinion.  And no way in hell should they be organizing a rally or speaking to media to make those opinions known.

If they're doing any of that, they must have been brainwashed, and are being used by the leftists for their own malignant purposes. 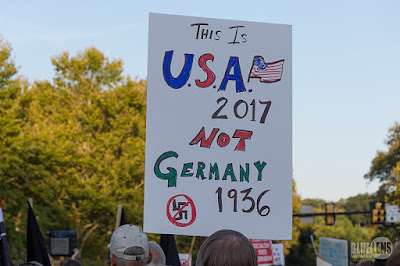 Speaking of responses, I have a great many of them, of which calling the likes of Wintrich, Jones, and Kingston a trio of goddamn hypocrites is the most succinct, and probably also the most printable.  But I'll add one more directed at them, and that's this: you better get out of the way, because these teenagers will not be silenced.  Your type has for years railed at teens as being unmotivated, lazy, and uninterested in participating in government.  I hope this shows you how wrong you are -- and perhaps, that your ignorant scorn has given these young people a voice that otherwise they might not have found.

To the teenagers themselves, I have a lot more to say.

Don't let the anger, doubt, and ridicule coming from people like this discourage you.  Any time you speak up, you will find that there are ones who will want to rob you of your right to express yourself, who will slander you and dismiss your opinions as worthless.  Speaking up is risky, but it's absolutely critical, and you will find that weathering the impotent fury of those who would deny you your voice will, in the long haul, be empowering.

So don't give up.  You have started something, something big, and you have captured national attention, including the attention of people who disagree with you.  This is a good thing.  Speaking out can be scary, and there will be times you will regret doing it, feel that you haven't accomplished anything, that the odds against you are too great.  But there are a lot of people standing behind you who will happily add their voices to yours.

As American activist Maggie Kuhn put it: "Stand before the people you fear and speak your mind – even if your voice shakes.  When you least expect it, someone may actually listen to what you have to say."
Posted by Gordon Bonnet at 1:59 AM