Pieces of one of the most enduring mysteries in UFO lore have allegedly been discovered in the National Archives of London.

Called the "Silpho Moor Crash," the incident occurred in November of 1957, when two men who were hiking on Silpho Moor in North Yorkshire, England, saw "a red light falling from the sky" and went to investigate, despite the fact that every time someone does this in a science fiction movie, they end up being messily devoured by evil aliens.  Fortunately for the two men, this did not happen.  Instead, they found a saucer-shaped object made of metal, eighteen inches in diameter, which upon opening was found to contain thin copper sheets covered with "unidentifiable hieroglyphics." 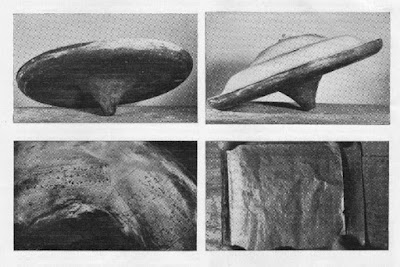 The Silpho Moor artifacts, including the "hieroglyphic sheets" (lower right)

The objects were much talked about, and eventually (sources indicate in 1963) they were sent to the London Science Museum for expert analysis.

After that, they were "lost to history."

It's kind of weird how often this happens.  Somebody gets amazing evidence of some hitherto-unproven apparition -- UFOs, ghosts, Bigfoot, Donald Trump's integrity -- and then after a little bit of buzz and maybe a few blurry photographs, it mysteriously disappears.  The conspiracy theorists waggle their eyebrows suggestively about this, and say that of course the evidence disappears, because the powers-that-be don't want ordinary slobs like you and me to have proof of any of this stuff.

Why the powers-that-be would care if we proved the existence of alien intelligence (for example), I have no idea.  As far as I've seen, the powers-that-be are much more interested in destroying the evil, cunning environmental scientists' conspiracy to defeat a beleaguered but plucky band of heroic corporate billionaires.  I can't imagine they give a rat's ass whether UFOs exist, except insofar as these would really be undocumented aliens.

Be that as it may, the Silpho Moor artifacts were lost -- until now.  Maybe.  Just last week, some people digging around in the London National Archives found, hiding in an old cigarette tin, some shards that are supposedly from the Silpho Moor Crash. 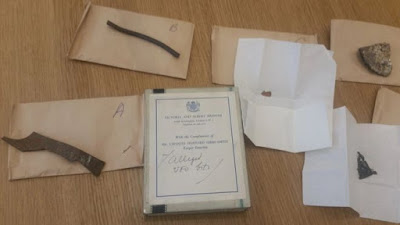 What seems odd to me is that every photograph from the actual crash shows an intact object that looks like an almost comically stereotypical flying saucer, and everything in this latest discovery is just a bunch of broken-up metal.  I suppose the scientists back in 1963 could have hacked the thing apart, but isn't it funny that there's no record of that?

Anyhow, the objects were discovered by an exhibit developer named Khalil Thirlaway, who brought them to the attention of Dr. David Clarke, a journalism professor at Sheffield Hallam University.

"He [Thirlaway] opened the tin box and took out the pieces, it was an amazing revelation - it had just been sitting there for half a century.  There must be a lot of it still out there, sitting in someone's attic, or maybe these are the last remaining pieces...  I thought it was a prank, but the question remains -- who went to all that trouble at great expense and what did they gain from it?  It has been described several times as Britain's answer to Roswell, and I don't think that's too great an exaggeration."

Well, yes, in the sense that it's a sketchy set of evidence for an incident that no one is sure has anything to do with alien intelligence anyway.  But at least now the fragments are out in the light of day, and with luck some scientists will get involved and analyze them.

Still, I wonder what they'd find that could prove it one way or the other.  Metal fragments are metal fragments, whether they come from outer space or not.  Despite what Geordi LaForge would have you believe, an extraterrestrial spaceship would not be composed of whatsisium and thingamajite, because the periodic table is kind of full-up with elements we already know well.  So I don't see any way to differentiate between an alloy from Earth and one from the Klingon Home World.

But that's something we can worry about later.  At least the objects were relocated.  Myself, I'm all for submitting hard evidence for study, whether or not it turns up anything significant.  Otherwise, you're back at the level of personal anecdote -- which is the worst form of evidence there is.
Posted by Gordon Bonnet at 1:58 AM