So we here in the United States are watching the funerals of seventeen more innocent children and adults, mown down by an angry white-rights extremist, and already the jockeying is beginning either to (1) claim that this has nothing to do with guns, or (2) use the tragedy to gain political capital.

I don't intend to get deeply into the first, because anyone with the sense God gave gravel can see that the outcome would have been different had Nikolas Cruz, a young man who was investigated a year and a half ago on the suspicion of being a danger to himself and others, and who was the subject of an FBI tip a month ago, not had carte blanche for buying an AR-15.

I've made the point before, but it bears mention again.  No one is coming for your hunting rifles.  No one wants to prevent you from owning a handgun to defend your home.  This is about limiting access to semi-automatic rifles whose sole purpose, aside from target practice, is killing lots of people in a short amount of time.  This is about dethroning the NRA as the de facto God of Patriotic Americans.

That hasn't stopped this kind of bullshit, originally from the site Robertson Family Values, from making the rounds of social media: 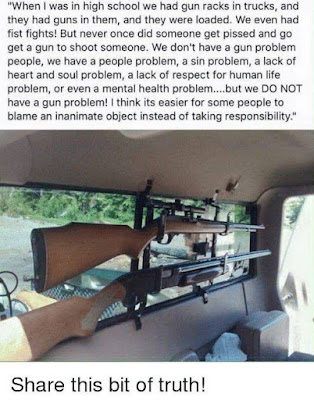 Notwithstanding the point that I question the brains of anyone who treats the yahoos over at Duck Dynasty as if they were founts of eternal wisdom, if you really can't see the difference between the guns in the photograph and an AR-15, you're part of the problem.

But this brings me to my second point, which is that the ground hasn't even settled over the graves of the murdered, and already people are scrambling to use this tragedy to drive home whatever they already claimed.  The shooter was quickly identified as a white supremacist, and the radical group Republic of Florida has admitted that he trained with them -- and pictures surfaced of him wearing a "Make America Great Again" cap.  Of course, you can't link the two, people said.  In fact, because of Cruz's last name, I saw the response more than once that "he wasn't white, he was Hispanic."  Never mind the fact that he seemed to loathe all minorities, including Hispanics.  One of Cruz's former classmates, Josh Charo, said, "He would always talk about how he felt whites were a bit higher than everyone.  He’d be like, 'My people are over here industrializing the world and starting new things, while your people [meaning blacks and Latinos] are just taking up space.'"

But the racists weren't the only ones to weigh in.  Conservative commentator Tomi Lahren jumped into the fray, claiming that if we were just more religious, everything would be hunky-dory:


Evil will always be in this world.  And evil people will always find evil ways to do evil things.  The solution isn’t to start stripping away rights.  What we ought to do is make it easier for law enforcement to engage and evaluate individuals who exhibit warning signs, like making graphic threats online, or posting disturbing images.  You know, thoughts and prayers might seem laughable to some of you.  But maybe, just maybe, more Jesus, more God, more prayer and more compassion is what we are missing.

Neglecting, of course, that her idol Donald Trump signed a bill revoking an Obama-era rule that makes it harder for people with a history of violent mental illness to purchase a gun.  So the "thoughts and prayers" offered after every single mass murder are as empty as always, and Tomi Lahren is a goddamn hypocrite.

The hypocrisy didn't end with the commentators.  House Speaker Paul Ryan, in a move that was tone deaf to the point of being barely believable, had a fundraiser in Florida the day after the shooting.  (Yes, I know it was planned in advance.  Yes, I still think it was amazingly tone deaf to go through with it.)  A woman at the fundraiser confronted him about what he intended to do about gun violence.  His response:


This is not the time to jump to some conclusion not knowing the full facts.  We've got a lot more information we need to know...  This is one of those moments where we just need to step back and count our blessings.  We need to think less about taking sides and fighting each other politically and just pulling together.  This House and the whole country stands with the Parkland community.

I.e., more "thoughts and prayers," and otherwise, you can expect him to do fuck-all.

But of course, this wouldn't be complete without a commentary from the Emperor of Tone Deafness, Donald Trump himself, who tweeted yesterday morning, "Very sad that the FBI missed all of the many signals sent out by the Florida school shooter.  This is not acceptable.  They are spending too much time trying to prove Russian collusion with the Trump campaign — there is no collusion."

So to Trump, the murder of seventeen people in a high school -- like everything else in the world -- is about him and his image.

The one thing that gives me hope about all of this is the response of the survivors.  In an impassioned response to Trump's use of a meeting with law enforcement in Parkland after the shooting as a grinning, thumbs-up photo-op, Emma Gonzales, a student at Marjorie Stoneman Douglas High School, where the shooting occurred, said:

We can't ignore the issues of gun control that this tragedy raises.  And so, I'm asking -- no, demanding -- we take action now.

Why?  Because at the end of the day, the students at my school felt one shared experience -- our politicians abandoned us by failing to keep guns out of schools.

In an interview with Anderson Cooper, Kasky said:


Everything I’ve heard where we can’t do anything and it’s out of our hands and it’s inevitable, I think that’s a facade that the GOP is putting up.  After every shooting the NRA sends a memo saying ‘send your thoughts and prayers.’  This is the only country where this kind of thing happens...  There is a segment of this society that will shrug this off and send their thoughts and prayers but march for hours over a rainbow wedding cake.

Kasky added, "This is something that can be stopped and will be stopped."

It's sad that seventeen-year-olds are having to step up and take action because the fifty-year-olds are so much in the pockets of lobbyists that they'll jettison their responsibility and sacrifice their integrity rather than lose money.  But at least the teenagers are stepping up.

Which should worry the hell out of the likes of Paul Ryan and Donald Trump.  Because in a year or two, these kids will be voting.

And you better believe they're not going to forget this.
Posted by Gordon Bonnet at 1:44 AM