Today, for what must be the tenth time, I saw the following image posted on social media: 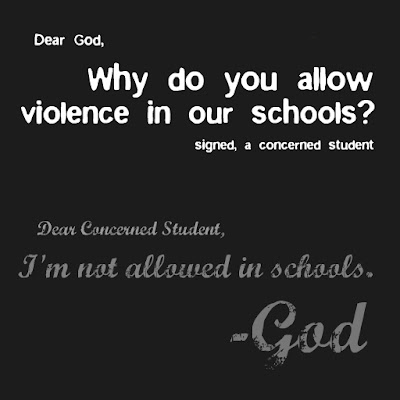 The people who posted it apparently decided for some reason that it was acceptable to use the tragic murder of seventeen innocent people to lob some snark at the atheists, secularists, and others who believe in the separation of church and state.  But what I want to address here is the toxicity of the mindset behind the message -- apart from what would spur someone to think that this is an appropriate time to post it (and truthfully, I can't think of an appropriate time to post it).

First, I thought y'all were the ones who believed that god was everywhere, was omnipotent and omnipresent and omniscient and omni-what-have-you.  What you're implying here is that a handful of people who think religion has no place in a public, taxpayer-funded institution have somehow overpowered an all-powerful god's ability to do anything to stop a crazed gunman.  (Probably explaining why the Florida State Legislature, having decided to do fuck-all about gun law reform, has decided instead to pursue a bill requiring "In God We Trust" to be posted in public schools statewide.)

So we're already on some shaky theological grounds, but it gets worse.  What the above message suggests is that somehow, god's attitude is, "if you won't pray in schools, innocent children deserve to die."  That given the choice of using his Miraculous God Powers to stop a massacre, he just stood there smirking and afterwards said, "See?  Told you something like this would happen if you didn't worship me all the time and everywhere.  Sorry, but my hands were tied."

Me, I think any deity that acts like this is a monster, not an all-loving beneficent creator.  That said, it's entirely consistent with the depiction of the Lord of Hosts in the Old Testament.  The Old Testament God was constantly smiting people left and right for such heinous crimes as gathering firewood on the sabbath, and when the Chosen People of Israel conquered a place, the word from above was "kill everyone, including children."

Don't believe me?  There are plenty of instances, but my favorite is 1 Samuel 15:


This is what the Lord Almighty says: "I will punish the Amalekites for what they did to Israel when they waylaid them as they came up from Egypt.  Now go, attack the Amalekites and totally destroy all that belongs to them.  Do not spare them; put to death men and women, children and infants, cattle and sheep, camels and donkeys."  So Saul summoned the men and mustered them at Telaim—two hundred thousand foot soldiers and ten thousand from Judah.

Long story short, Saul did as told, killing everyone up to and including the donkeys, but the Lord was still pissed off for some reason, and the Prophet Samuel told him so.  Apparently it had to do with the fact that Saul had spared the Amalekite King, Agag (like I said before, to hell with the children).  So Saul executed Agag, but the Lord still wasn't happy with him.

So what this shows is by posting bullshit like the above image, the people who think this kind of deity deserves worship are simply walking their talk.

The whole thing brings to memory a quote from Richard Dawkins.  I know his very name raises hackles, but it's so germane to this topic that I would be remiss in not including it:


The God of the Old Testament is arguably the most unpleasant character in all fiction: jealous and proud of it; a petty, unjust, unforgiving control-freak; a vindictive, bloodthirsty ethnic cleanser; a misogynistic, homophobic, racist, infanticidal, genocidal, filicidal, pestilential, megalomaniacal, sadomasochistic, capriciously malevolent bully.

To which I can only say: touché.

The deepest problem, though, is the one the people who post this nonsense would be the least likely to admit; when they advocate tearing down the wall between church and state, they're absolutely adamant that it can only be for the benefit of one church.  Start talking about having Jewish prayers or quotes from the Qu'ran or some of the Ten Thousand Sayings of Buddha festooned about the walls of classrooms, and you'll have these same people screaming bloody murder.

So as usual, what we're talking about is a combination of ugly theology and complete hypocrisy.  And it would be hardly worth commenting on if it weren't for the power that these attitudes still have, and the degree to which they still influence policy in the United States.

Other than railing about it here on Skeptophilia, I'm not sure what to do.  Anyone who really believes this -- anyone, in other words, who wasn't just trying to score some points off the atheists -- has subscribed to a belief system that is very close to the definition of evil.

And people talk about us atheists being amoral.
Posted by Gordon Bonnet at 2:12 AM