There's a single question that can keep us honest with respect to many aspects of life, and that question is: "How do I know this is true?"

It only works, of course, if you answer it honestly, and are willing to consider the possibility that you could be wrong.  If all you do is say, "Because of _____" (fill in the blank with your favorite combination of: the bible, Fox News, a political commentator, a famous actor or actress, a claim I ran into on the internet), and forthwith cease thinking about it, you haven't gotten very far.

A friend and loyal reader of Skeptophilia sent me a link that was a good illustration of this principle, or more accurately, the kind of nonsense you can fall for if you don't apply it.  The link was to an article over at the site The Limitless Minds, called, "Leave A Glass Of Salt Water And Vinegar To Detect Negative Energies In Your Home."

Starting out with my pet peeve over the way woo-woos use words like "energy" (and frequency, and quantum, and resonance, and vibration, and on and on ad nauseam).  But fortunately for us, the author, Matteo Light, defines what he means right away:


This may seem a little weird at first, but it’s possible to have a reservoir of negative energy trapped in your home.  And by negative energy, I mean emotional energy that comes from humans.  It could be there from past tenants or homeowners, or from a year ago when you and your spouse were fighting a lot.

Once again, the principle applies: how do you know this "negative energy" exists?  Have you detected it on a Negative Energy-o-Meter?

No, apparently not.  In fact, the next thing Light does is criticize the scientists who would even expect such a thing:


Traditionally, science doesn’t like things it can’t touch, measure, or put into a tiny jar on the shelf to examine.

Eventually, scientists discovered forces that exist in the world that are invisible.  One of those things is energy in its many expressions.  We usually can’t see it, but sometimes we can feel it.

How ridiculous, only believing in things for which you have evidence.  If you can imagine.

But Light says we do have evidence; a "feeling."  All you need, I suppose.

Then we're given the one fleeting nod to any kind of experimental support -- but he pulls out the tired old "nice words -- pretty ice crystals, mean words -- ugly ice crystals" research by Dr. Masaru Emoto, that has become the basis of every Quantum Resonant Vibrations of Love claim ever since.  I won't do a takedown of Emoto's claims here -- Dr. Steven Novella over at NeuroLogica did a thorough job of that in November of last year -- but I will mention two relevant points:
So we're already on mighty shaky ground, but Light soldiers on ahead to tell us what we can do to combat these invisible, undetectable "negative energies," presumably so that the ice cubes in our freezer don't form ugly shapes or something.

We are, he says, to put two tablespoons of white vinegar and two teaspoons of granulated salt into sixteen ounces of filtered water, mix it together, and put it somewhere that you'll be near.  Leave it for a day.  Once the salt has "stopped rising," it's collected all the negative energy it can, and you should move it to somewhere else in the house to de-negativize that room, too. 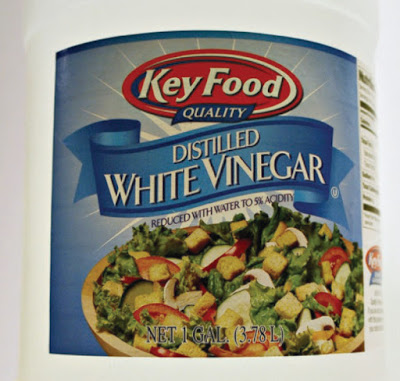 And I'm thinking: that's it?  How do you know that?  Did you look at the water, vinegar, and salt mixture after sitting there for a day, and decide that it seemed unhappy?  Did getting near the negative-energy-saturated water give you quantum fluctuations in your chakras or something?  But of course, we're never told why we should believe this works, or even what specifically it supposedly accomplishes.  All we're told is that we should rely on our feelings, and that'll be enough.

Well, I'm sorry, but that isn't enough in science.  Scoffing about how scientists like to be able to measure stuff (or put it in a tiny jar on the shelf, as the mood strikes) ignores the fact that when it comes to establishing the truth of a claim, science is kind of the only game in town.

Of course, the claim also raises some more prosaic questions, such as: does it have to be a particular, dedicated salt-vinegar-water mixture, or will any old salt-vinegar-water mixture do?  If the latter, then why don't our houses get de-negativized by, say, a jar of pickles?  This'd be a little worrisome, though, because the contention is that the negative energies get absorbed by the liquid, so there you'd be, raiding the refrigerator hoping for a nice half-sour, and instead you'd get the Fearsome Negative Pickle Spear of Doom.

So predictably, I'm unimpressed.  I'll just stick with whatever negative energies are hanging around my house.  Thus far, they haven't bothered me any.  Also, I have a container of salt and a bottle of white vinegar in a cabinet in my kitchen, and there's no reason they can't do their thing as is.
Posted by Gordon Bonnet at 1:53 AM