New from the "Haven't These People Ever Watched Horror Movies?" department, we have: some scientists in Austria who have uploaded the brain of a worm into a computer.

The research was done at the Technische Universität Wien (Vienna Technical University), and was done by computer engineers Mathias Lechner, Ramin Hasani, and Radu Grosu.  The worm was Caenorhabditis elegans, well known to researchers in developmental biology as the favorite species for research into how cell specialization unfolds.  The brain of C. elegans only has three hundred neurons, and the connections between them (synapses) are well understood, so what Lechner et al. did was to render the worm's brain as a circuit diagram, and emulated that circuit in a piece of software.

Within short order, they found that they were on to something pretty amazing.  Because the program could learn.  The task was simple -- given a model of a pole balanced on its end, the program had to figure out how to keep the pole upright if its top was moved (by sliding the base until it was upright again).  But it figured out how to do it, and most astonishingly, without having to be shown.

"With the help of reinforcement learning, a method also known as 'learning based on experiment and reward'," Lechner said, "the artificial reflex network was trained and optimized on the computer."  Co-author Grosu added, "The result is a controller, which can solve a standard technology problem – stabilizing a pole, balanced on its tip.  But no human being has written even one line of code for this controller, it just emerged by training a biological nerve system." 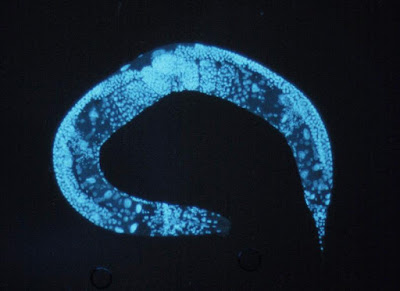 Caenorhabditis elegans.  Not one of the big thinkers of the Animal Kingdom.

Of course, this opens up about a million questions.  Once this software has all the bugs worked out, does it then qualify as a life-form?  Most people, faced with this question, say, "Of course not."  I know this because we discuss the possibility of artificial intelligence in my neuroscience class, and when I suggest that a computerized intelligence would be alive, most students respond with a vehement negative.  (Oddly, they are much quicker to accept that a machine could be intelligent than that a machine could classify as alive, and are usually unable to articulate exactly why they feel that way.)

Another, and deeper, question is to what extent this type of trick could be scaled up.  Not that it would be easy; there's a hell of a difference between the three hundred neurons in the brain of C. elegans and the estimated one hundred billion in the human brain.  Because, after all, you not only have to consider the number of neurons, but the number of their potential connections -- a quantity that, after playing around with some estimates, I have concluded is "really freakin' huge."  I'm no computer scientist -- heaven knows, most days I'm doing well to remember where the "on" switch is -- but the thought crosses my mind to wonder if emulating such a complex system in a computer is even theoretically possible.

Whatever the upper limit is, the feat is pretty astonishing.  The authors write:

Through natural evolution, nervous systems of organisms formed near-optimal structures to express behavior.  Here, we propose an effective way to create control agents, by re-purposing the function of biological neural circuit models, to govern similar real world applications.  We model the tap-withdrawal (TW) neural circuit of the nematode, C. elegans, a circuit responsible for the worm’s reflexive response to external mechanical touch stimulations, and learn its synaptic and neural parameters as a policy for controlling the inverted pendulum problem.  For reconfiguration of the purpose of the TW neural circuit, we manipulate a search-based reinforcement learning.  We show that our neural policy performs as well as existing traditional control theory and machine learning approaches.

A video demonstration of the performance can be viewed at: https://www.youtube.com/watch?v=o-Ia5IVyff8&feature=youtu.be

So while I don't think we're going to be seeing Commander Data joining Starfleet any time soon, this could well be the first step toward machine intelligence.  This is simultaneously thrilling and scary.  Like I said in my opening sentence, all you have to do is watch bad 1960s horror movies to find out how often the super-intelligent robots went berserk and started killing everyone, beginning with the scientists who had created them (usually after said scientists said, "Stand back!  I know how to control it!").  On the other hand, even if the robots do take over, they can't fuck things up much worse than they already are.

So upon reflection, I think I'll welcome our Computerized Worm Overlords.  Even if they never get around to doing much other than keeping poles standing upright, they'll still be ahead of the yahoos who are currently running the country.
Posted by Gordon Bonnet at 2:05 AM