A hole in your argument

There are some legends that stick around despite the fact that they are demonstrably false.

At least for some of tall stories, you can see how they'd persist.  Tales like Slender Man, the Black-eyed Children, and crazed murderers with hooks for hands have been around ever since the tradition of telling scary stories around campfires began.  So while they're not true -- at least, there's no evidence for any of them of the kind that would convince a skeptic -- you can at least understand why someone might fall for 'em.

In some cases, though, there are claims that are made that are easily verifiable.  And when someone does bother to verify them, and finds that they're false, and yet people still believe -- that I can't comprehend.

As an example of this, take the tale of "Mel's Hole," a supposedly bottomless pit near Ellensburg, Washington.  Ranker ran a story on the legend a few days ago, based on a radio piece that ran a while back on the paranormal show Coast to Coast, and tells us about the meat and bones of the story.

A guy named Mel Waters called in to Coast to Coast to tell the hosts about a hole on his property in central Washington State.  It was, Waters said, nine feet in diameter and lined with bricks.  It predated Waters, he said; locals, and before that the indigenous inhabitants of the area, knew about it -- and avoided it.  It was cursed, they said. 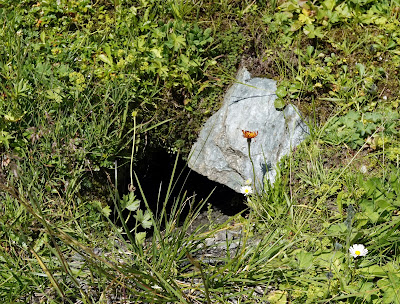 Waters, though, got interested in it, and decided to see how deep it was.  He put a weight on the end of some fishing line, and lowered it down the hole.  After he'd released 80,000 feet of line, it still hadn't gone slack -- i.e., the hole itself was over fifteen miles deep.

Already I was getting a little suspicious.  It's hard to imagine anyone having the patience to release fifteen miles of fishing line into a hole in the ground.  But be that as it may, it was far from the weirdest thing Waters claimed.  Here are a few of the things he told the Coast to Coast folks:
But far and away the weirdest claim about the hole is that it could bring animals back to life.  A neighbor, Waters said, had a dog who died, and the neighbor did what any bereaved pet owner would do, namely, look for a random hole in the ground on someone else's property to throw the body into.  But the dog not only didn't stay in the hole, it didn't stay dead.  Waters said he'd seen it running around in the woods afterwards -- wearing the same collar it was wearing when the neighbor threw it in.

So far, pretty spooky stuff.  But there are a variety of problems here, the most serious of which is, if you claim there's a giant magical hole in the ground, your story kind of falls apart if it doesn't exist.

Which it doesn't.  Not only that, geologists say that a fifteen-mile-deep hole would be impossible, especially near the seismically-active Cascade Range.  But even accepting that magic might in this case trump modern geological science, no one has been able to find the hole -- even a guy who claimed to know where it was and believe in its powers, one Gerald Osborne, led a thirty-person expedition in 2002 that found zero holes.

Last, and most damning of all, local reporters have dug into property records in Kittitas County, and have found no record that a man named Mel Waters ever owned property there -- or even lived in or near Ellensburg.

So the whole thing is clearly a hoax, and Waters himself non-existent.  And that, you would think, would be that.

But as we've seen over and over, with woo-woos, that is never that.  You can have the most sterling argument, demonstrate the lack of evidence until the middle of next week, and they'll still say, "Yeah, but."  And thus, the legend of Mel's Hole persists, lo unto this very day.

As for me, I'm sticking with science.  Call me unimaginative, but there you are.  As the inimitable Carl Sagan put it, "It is far better to grasp the universe as it really is than to persist in delusion, however satisfying and reassuring."  I don't think he was talking about fictitious holes in the ground, but it applies equally well to them.
Posted by Gordon Bonnet at 2:23 AM