Because we evidently don't have enough to worry about, now we have news that a rogue dead star has entered our Solar System and is eating the Sun.

I'm not making this up, but the person who made the claim, one Dr. Claudia Albers, almost certainly is.  She once worked for the University of Witwatersrand, in Johannesburg, South Africa, but resigned last July for unspecified reasons.  I suspect it must have been that her department chair found out she'd gotten her Ph.D. from Big Bob's Discount Diploma Factory, but that's just a guess.

My reason for saying this is that Dr. Albers doesn't sound like a physicist, she sounds like a complete loon.  Here are her own words regarding the imminent catastrophe:


They are old or dead stars - I never said they were planets - they are stars draining the Sun of energy.  It is likely a huge system of old dead suns that have come to the Sun and been affecting it.  They are making plasma connections with the Sun and can make the Sun go dark, the Sun is getting weaker...

These objects are causing changes in the solar system that cause earthquakes and volcanic eruptions.  Earth appears to have captured one of these objects - there are crustal displacements on Earth...

It is not a passing system, it is in orbit around the Earth.  It is a huge system of stars attracted to the Sun and that stays close to the Sun once it is in our solar system.  I recently discovered they may have gone from the Sun to planets and that may be why Jupiter went from 16 satellites to 69, it must have captured something...

It seems that the object is here and it is not alone because there is evidence that there are many of these objects in the inner solar system and they have been coming in towards the Sun for many years.

As you might expect, she accuses NASA of covering the whole thing up.  "If there is nothing to hide," Albers says, "then give us the real time view of the Sun – if there is nothing to hide then open it up, why do you only give us little snippets with a huge delay?"  Because clearly the only possible explanation there could be for why NASA isn't opening up all of its digital images to scrutiny is that a gigantic dead star is feeding on the Sun and they don't want you to know about it. 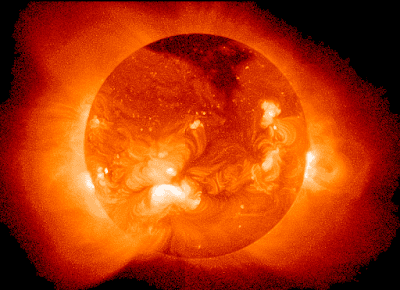 Of course, the above claim brought up questions as to whether this rogue star is the same as "Nibiru," the mysterious "Planet X" that has been a favorite of woo-woos for years.  Said wingnuts have claimed over and over that Nibiru is coming, and that it's going to wreak havoc on the Earth, but then it never shows up.  Just as well.  We're wreaking enough havoc down here on our own, lately.

But Albers says that no, this isn't Nibiru.  "There is no evidence this system is the same system that came through before," she said.

At that point, I gave the computer the head-tilt of puzzlement, similar to what my dog does when I give him an unreasonable and/or unintelligible command, such as to stop eating my shoe and gnaw instead on one of his 1,385 chew toys.  What does she mean, "the same system that came through before?"  I think I'd have been aware if a humongous exoplanet had suddenly swooped down and caused massive planetary-wide destruction.  It's hard to imagine missing that.

Be that as it may, Albers says that this time it's really serious, that the rogue dead star is feeding, vampire-like, on the energy from the Sun, and pretty soon the Sun will run out and go dark, which will kind of suck.  I mean, that's what happened at the end of Star Wars Episode Number Who the Hell Can Keep Track: The Force Awakens, wherein Kylo Ren et al. turned on a machine that sucked all the energy out of a star, but instead of the planet that orbited it turning immediately into a gigantic popsicle, it was still warm enough for Kylo and Rey to leap about and get into a protracted light saber battle.

So heaven knows we don't want that.  The good news is that João A. P. Rodrigues, head of the University of Witwatersrand School of Physics, was pretty unequivocal that Dr. Albers is talking out of her ass.  He didn't put it that way, of course.  "The University supports the freedom of people to hold and discuss contrarian views," Rodrigues said.  "However, insofar as the sciences are concerned the principles of the scientific method must guide the process.  Debate outside this framework constitutes bad science and the University distances itself from such practice."

Which is academic-speak for "You're talking out of your ass."

Anyhow, I'm not worried.  I figure we have more pressing matters to worry about right now, such as how to keep Donald Trump from opening the Seventh Seal of the Apocalypse.  Although I have to admit that the Sun has seemed pretty weak and cool lately.  But that may be because I live in the famed "four-season climate" of upstate New York -- "almost winter," "winter," "still winter," and "road construction."
Posted by Gordon Bonnet at 2:49 AM