An instrument of the divine will

There are people for whom the line between reality and fantasy gets so blurred that at some point, I'm not even convinced they know whether they're telling the truth or not.

That's my impression of Kevin Zadai, who was a guest last week on the television show It's Supernatural!, hosted by Sid Roth.  The show itself is about using accounts of the supernatural to bolster up the claims of evangelical Christianity, and Roth himself is essentially a televangelist.  Most of the stuff on the show is the usual fare -- accounts of being led one way or another by Jesus, with positive results (of course), miraculous recoveries from illness, amazing escapes from being injured during natural disasters, and so on.  But last week, Zadai took a different twist on the whole thing.

He related to Roth how he'd gone in for a dental procedure, and he had a reaction to the anesthetic, and his heart stopped.  While he was dead (for want of a better word), he went to heaven, where he met Jesus:


… [Jesus] told me that I didn’t have enough depth in my prayers, that I didn’t have enough access to the depths of my heart, and He explained it…  In Psalm 16, David wrote that, prophetically, for me, He said. Jesus said that David wrote that Psalm, and He memorized that Psalm, because when He was in the depths of Hell, He said He rehearsed that Psalm over and over again, and He said, “I cleared a way out in that place for you, and for everyone, in Messiah, to pray from those depths.”

He said, “I prayed Myself out of Hell because I had the Psalm 16, and I prayed that continually, and then the Holy Spirit came and resurrected me.”  And he said, “When you pray, you pray with that kind of a fervency, where you know who you are based on the scripture.”  Because He said, “I had no witness when I was down there.  I had no Holy Spirit help.”  He said, “If the Father had not given the command,” he said, “I would sit down there until He gave the command for Me to be resurrected. That’s how much I trusted Him.”  He said, “That’s where you pray from. You pray from those depths. That trust.”

So far, nothing too unusual.  People who have near-death experiences often meet supernatural personages, although interestingly enough, it's always the ones that come from whatever religion they already believed.  If a devout Christian had a near-death experience and met Ganesha, for example, I might be more willing to sit up and take notice.

But then Zadai took an abrupt left turn.  When Roth asked him for more details about his meeting with Jesus, Zadai happily complied -- and said that Jesus had taught him to play the saxophone.

I am not making this up. 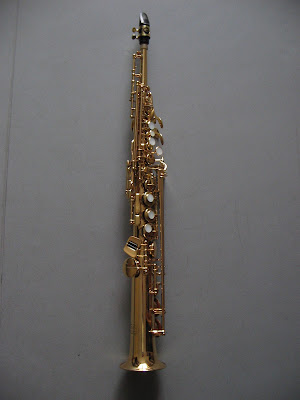 The Messiah, Zadai said, had a pretty nice instrument, and was happy to give him a lesson on it:


...This particular one He had was a soprano sax.  It was a beautiful gold saxophone... He was standing there, and He had this saxophone in His hands, and He started to play it over me…  He took it away from His mouth and handed it to me and He said, “You play.”  And I go, “Lord, I can’t play like that!”

He said, “That’s because you’re doing it wrong.”  He said, “Let me show you.”  He said, “Stand up.”  So I stood up...  And I looked around and He goes, “See all that around you?”  He said, “That’s the Holy Spirit and the presence and glory of My Father.”  He said, “That’s always there.”  He said, “What’s wrong is that you’re not breathing in Heaven first.”  He said, “Breathe that in first, and then blow it through your horn, and it’ll work out just fine.”  So I took a big breath and all this gold air around me went inside of me, and I put that horn that He handed to me in my mouth, and I blew, and it was exactly like Jesus had played.

Well, I play a wind instrument, and I have to admit that standing up while you play and using your breath to support your tone isn't bad advice.  But this image I have of Jesus playing the soprano sax... well, it's just not working for me.  I know he's supposed to be super-powerful and all-knowing and whatnot, but I honestly never considered that his abilities would extend to having good blues chops.

Now, what strikes me about this is not Zadai making a weird claim.  After all, weird claims are a dime a dozen, and are in fact have been the bread and butter of this blog for going on nine years.  I'm not even surprised about Roth's generally positive reaction, because televangelists, like a lot of talk show hosts, thrive on people saying and doing weird shit, because face it, weird shit sells.

What surprises me is the audience's reaction.  No one -- not a single person -- started laughing.  No one got up and walked out.  Instead, they looked at Zadai as if he were the recipient of a holy miracle.  The audience cheered and shouted "Hallelujah" and "Praise Jesus."  Some audience members were in tears.

I mean, I know that the audience was made up of people who were devout Christians; I'm sure they take great pains to screen out professional scoffers such as myself.  But even so, don't they draw the line somewhere?  What would it take to make them frown and say, "Wait a minute..."?  Would they believe it if someone said Jesus had paid off his credit card bills?  That the Lord had given him some golf tips?  That he got a divine suggestion to play one more round on the roulette wheel at the casino?

On the other hand, these are the same people who think that god cares about the outcome of the Superbowl.

I'm not bringing this up to be scornful (honestly, I'm not).  It's more that I'm curious about how someone could believe in a deity that is so bent on micromanaging everything that he takes the opportunity of a near-death experience to teach a guy a few riffs on the soprano sax.  Of course, in Matthew 10:29, Jesus himself says, "Aren’t two sparrows sold for a penny?  Yet not one of them falls to the ground apart from your Father’s will."  So as bizarre as it seems to me, at least it's scripturally consistent.

What I get least, however, is how anyone can find this worldview comforting.  Do you really think it's reassuring that Jesus is always watching you?  Twenty-four hours a day?  To me, that's more "creepy stalker" than it is "light unto the world."

So the whole thing leaves me a little baffled, frankly.  Maybe my own scientific view of the universe seems a little impersonal, but at least I don't have to worry about the spirit of Stephen Hawking watching me while I take a shower, or something.
Posted by Gordon Bonnet at 2:03 AM