Thanks to a friend and loyal reader of Skeptophilia, I now have an even lower opinion of humanity than I did before.

It's not the first time this has happened, of course, and won't be the last.  It's kind of an occupational hazard when your daily task is to comb the interwebz for crazy woo-woo ideas.  But this one is kind of in a league of its own.

Or maybe I'm just fed up.

The claim I'm referring to is that now we're being told that if you want to be healthy, you need to drink a charcoal latté.

I'm not making this up.  A recipe I saw -- and there are apparently dozens -- includes coffee, cashew milk (can't use dairy products), date syrup (can't use sugar), and powdered activated charcoal, to make "the chicest drink on the market."  Myself, I have a hard time imagining how this wouldn't taste like licking a barbecue grill that had been drizzled with honey, but chacun à son goût. 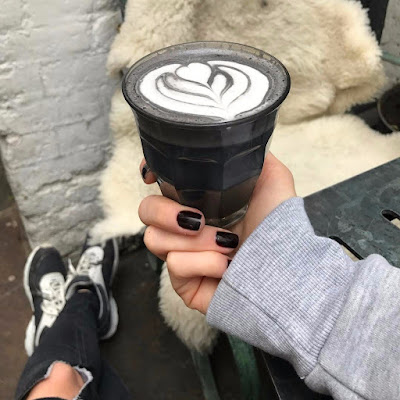 Thus far, all we have is a weird new food craze, not inherently weirder than Fireball-flavored bagels and ice cream sundaes topped with chili-coated grasshoppers.  What makes the charcoal latté claim stand out is that the people pushing it are not only claiming it tastes good, but that it will "detox" you.

So we're adding a nice dollop of quack alternative medicine to our morning unusually black coffee.  As I've pointed out maybe 397 times before, if you are healthy, there is absolutely no need to "detox" because your kidneys and liver are "detoxing" you just fine as you sit there.  Plus, the whole thing is based on vague and poorly-understood science anyhow; I have never found a single person recommending "detox" who could name a specific toxin that the procedure eliminates, much less one that wasn't being eliminated naturally via your excretory system.

It gets worse, though, because here we're not talking about adding ground-up organic papaya seeds and Mongolian yak milk to your coffee; we're talking about activated charcoal, a substance with a legitimate medical purpose -- it is used in cases of poisoning to absorb toxic substances from a person's digestive tract.  Or an animal's, which I know because of our border collie Doolin, who ate a dozen exquisite and expensive chocolate truffles after swiping them from the kitchen counter, and had to have activated charcoal forced down her throat, following which she puked up charcoal and partially-digested chocolate all over the back seat of my wife's brand-new Mini Cooper.

It's moments like this that I question why anyone in their right mind would own a dog.

The reason the activated charcoal thing is a terrible idea is that it is absorptive -- not only of toxins you may have inadvertently swallowed, but of biologically-active substances of all sorts.  Such as any medications you may take.  So in an ill-advised attempt to flush unspecified and most likely nonexistent toxins from your body, you stand a good chance of binding and inactivating your medicines.

I.e., substances you're taking because they've been prescribed by someone who actually understands organic chemistry and human physiology.

So my recommendation: have at it with the chili-coated grasshoppers, but avoid the charcoal lattés.  I feel ridiculous even having to say this, but apparently it's become a "thing," and once someone is a "thing," you know that all the trend geeks are just going to have to try it.  Which, I suppose, is just another example of natural selection in action.
Posted by Gordon Bonnet at 3:03 AM