Sometimes, and I say this with all due affection, my fellow humans scare the absolute shit out of me.

This comes up because of a story I ran into a couple of days ago over at Right Wing Watch, which is a place you definitely don't want to hang out if you want to maintain the opinion that the people around you are rational, or necessarily even sane.  This particular piece, by Peter Montgomery, is entitled, "Prophets Gather at Trump's Washington Hotel to Unleash Angel Armies on his Deep State Enemies," and is basically about how those of us who have criticized the president are about to get what we deserve, and boy are we really gonna be sorry.

The host of the event was Dutch Sheets, executive director of Christ for the Nations Institute, which is dedicated to remodeling society in government along biblical lines.  In other words, turning the United States into a Taliban-style theocracy, with all that implies for non-religious people like myself.    When asked about the conference, Sheets said, "There's never been anything on planet Earth like what's about to happen," which is true in that I can't imagine another scenario where self-professed Christians spent hours singing the praises of someone whose major claim to fame is a world speed record in commandment-breaking.

The battle, Sheets said, wasn't just about Trump, but about "whether the devastation caused by fifty years of anti-Christian activity will be reversed or, God forbid, continue...  The antichrist forces are almost rabid in their anger over the potential loss of progress."

By "anti-Christian activity," what he seems to mean is legislation requiring people to treat folks of other ethnic origins, religions, and sexual orientations with dignity.  If you can imagine.  Anyone who stands in their way, Sheets said, needs to be "removed" -- up to and including members of Congress and the Supreme Court (and since the only way Supreme Court members are "removed" is through resignation or death, that comment should definitely give you pause).

Sheets wasn't the only one who spoke at the conference, of course.  One speaker called Trump "the father of this nation" and that his decision to move the American embassy in Israel from Tel Aviv to Jerusalem was "history-making" and "prophecy-making."

What is most frightening about these people is their complete, unadulterated self-righteousness.  One speaker, evangelical activist Cindy Jacobs, said that god had told her personally that it was time to "convene the courts of heaven" and that the conference attendees "are God’s enforcers in the earth for His will to be done."  Another said that their duty was to "destroy all God’s enemies and all the enemies of America, in the name of Jesus Christ."

Sheets himself made a rather frightening prediction. Trump, he said, "would accomplish everything Almighty God sent you into that house to do, regardless of who likes it or who doesn’t... he will receive a visitation from heaven that will give him an intimate knowledge of Jesus Christ."  About anyone who tries to fight against Trump's agenda, he had the following to say:

As long as Sheets and his pals are counting on the angels to come down and do all of this, I'm not particularly concerned, as there's no evidence that angels exist.  My fear is that we'll have a repeat of what always happens when extremists of all stripes don't get their way -- they stop waiting for God or Allah or what-have-you to take care of matters, and pick up a weapon to take care of it themselves.

I mean, really.  Will someone please explain to me how these people are different from ISIS in anything other than the details? 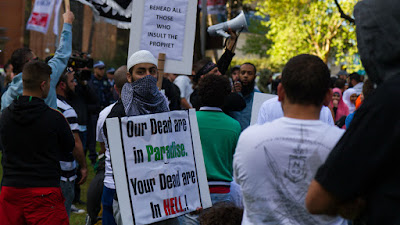 So that's our scary bit of news for the day.  I maintain that most of my fellow humans are really pretty nice people, trying to do what they can to keep themselves and their loved ones safe and happy.  The problem is, a small minority of wingnuts like these can do an incredible amount of damage in a very short period of time.  And given the rhetoric people like Sheets and Jacobs are spewing, it's only a matter of time -- especially given the collision course their Chosen One is currently on with the law.
Posted by Gordon Bonnet at 2:27 AM