Wednesday was the National Walk Out Day for the #NeverAgain movement, and it's estimated that over a million high school students walked out of their classes to protest the government's inaction on gun law reform -- and the fact that many elected officials are in the pockets of the NRA.  While some school districts were supportive of their right to protest, others chose to punish the ones who participated with penalties up to and including suspension or paddling.  (Yes, there are schools that still inflict corporal punishment on students.)

And of course, the backlash from the general public against the students who participated went full-bore almost immediately.  A quick perusal of social media was enough to gauge the vitriol being hurled at them.  One person I saw called them "lazy little snowflakes."  Others said they were only walking out so they could claim justification for skipping class (odd, then, that in our area -- where many schools were closed because of a snowstorm -- students showed up anyhow so they could stand in solidarity with the rest of the protesters).  They were called names (a politician from Maine called #NeverAgain leader Emma González "a skinhead lesbian").  They were accused of being tools of the radical left.  Most frustrating -- at least for me, looking at it from the outside -- is the level of condescension from adults, the implication that there's no way that these young adults could possibly have a relevant opinion, or one that the adults themselves should take seriously.

What this demonstration has proven, however, is that the adults who are misjudging and/or dismissing these teenagers are doing so at their own risk.  There is no sign of this movement going away, or being at all quelled by the snark being hurled their way, or how they are being portrayed in social media and (most of) the conservative press.  A banner was put up on a fence near Marjory Stoneman Douglas High School on Wednesday with a particularly trenchant quote from Douglas herself: 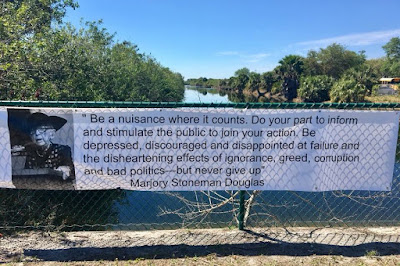 The last time I've seen an anti-establishment uprising this powerful was the anti-Vietnam-War protests of the 1960s and early 70s.  The same kind of insults were lobbed at protesters back then; they were ne'er-do-wells, hippies who just wanted to tear down the rule of law, stoners whose opinion didn't count and shouldn't be taken seriously.

Today's establishment should look at the results of that episode as the cautionary tale it is.

It's worth considering looking even further back in history, however, and recognizing that civil disobedience is how this country was founded.  And while we call the people who launched the American Revolution are called "the Founding Fathers," they were by and large young people.  In 1776, James Monroe (and French ally the Marquis de Lafayette) were 18, Aaron Burr 20, Nathan Hale 21, Robert Townsend 22, George Rodgers Clark 23, and James Madison 25.  While some of them were in their thirties and forties -- notably George Washington, Thomas Jefferson, and John Adams -- the Revolution was not fought, or even led, by staid, dignified elder statesmen.

These kids have stood up to politicians all they way up to the president of the United States; they are not going to be silenced by disdain.  And it bears mention that a significant portion of the teenagers who are participating will be of voting age by the November elections; virtually all of them will be voting by November 2020.  And trust me, they are not going to forget the elected officials who have ridiculed them and dismissed their opinions.

Whether you agree with them or disagree with them, this movement is not going to be stopped.  The wise among us will at least engage in an honest dialogue with them.  The foolish will discount their power and try to stand in their way, or even pretend they don't exist.

If these young adults are snowflakes, prepare for an avalanche.
Posted by Gordon Bonnet at 2:23 AM