Leadership by the unqualified

I'm going to ask a question that will undoubtedly be uncomfortable for the 33% of Americans who are still in support of what our current administration is doing:

Why are you content to have people in jobs for which they are manifestly unqualified, and about which they display nothing short of catastrophic ignorance?

Surprisingly, I'm not talking here about Trump himself, although I'd argue that those charges could just as easily be levied against him.  The fish rots from the head on down, as the saying goes.  But here I'm referring to Secretary of Education Betsy DeVos, who was interviewed by Lesley Stahl a few days ago on 60 Minutes, the results of which are nearly unwatchable, if you (like me) hate seeing someone completely humiliating themselves in public. 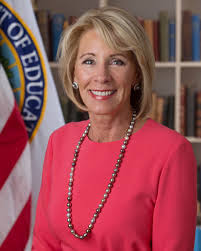 What's especially appalling about this interview is that Stahl was not trying to nail DeVos to the wall.  In fact, some of her questions strike me as softball.  And DeVos still couldn't give a coherent answer.  As an example, Stahl asked her if, under her leadership, schools in her home state of Michigan had gotten better.  After all, she allegedly got the nomination from Trump because of her work promoting charter schools there, so her influence in Michigan far predates her appointment to the Department of Education.  Here's her answer:


I don't know.  Overall, I -- I can't say overall that they have all gotten better.  There are certainly lots of pockets where the students are doing well.  Michigan schools need to do better.  There is no doubt about it...  I hesitate to talk about all schools in general because schools are made up of individual students attending them.

"I don't know?"  The Secretary of the Department of Education is asked about the current status of schools in her home state, and she says, "I don't know?"  For one thing, how can she have gone into this interview not having at least prepared an answer for this question?  I mean, if there's an expression that means the opposite of "out of left field," that's what this question was.

And she can't talk about schools in general, because they're "made up of individual students attending them?"  What the hell does this even mean?

But those were far from the only problems.  When Stahl asked her if she'd visited any underperforming schools, DeVos answered with a flat no.  Stahl, whose cool, collected persona slipped, betraying a moment of pure astonishment, said, "Maybe you should."

DeVos looked confused, and echoed, "Maybe I should."

Then DeVos tried a salvo of her own.  "The federal government has invested billions and billions and billions of dollars in the educational system," DeVos said, "and we have seen zero results."  Stahl, who unlike DeVos had actually done her homework, said that this wasn't true -- that test scores over the past 25 years had risen steadily.

DeVos gave her a walleyed stare for a few seconds, and said, "What can be done about that is empowering parents to make the choices for their kids.  Any family that has the economic means and the power to make choices is doing so for their children."

And on and on it went.  I honestly at some point had my hands over my eyes because I couldn't bear to watch.  But after the video clip was done, and I had recovered from being that long in a state of wince, I started to get mad.  How is this woman qualified to run the Department of Education?  My sense is that she would be out of her depth in a kiddie pool, and the sole reason she is in the position is that she is a multi-millionaire plutocrat who donated to Donald Trump's election campaign.

So, to the conservatives who've read this far: how can you accept this?  This honestly has nothing to do with party.  Betsy DeVos would be drastically unqualified regardless what her political leanings were.  But there she sits, on the Cabinet of the United States, and she does a public interview in which she comes across as a blithering idiot...

... and not a single Republican leader has anything to say about it.

C'mon, people.  At some point sound leadership has to outweigh party affiliation.  It is ridiculous that our country's educational system -- our hope for the future -- is being run by a woman who, in my grandmother's words, "don't have the brains that God gave gravy."