Adams, you probably know, is the wingnut who founded Natural News, which is the world's biggest clearinghouse for loony alt-med claims and unfounded conspiracy theories about things like "toxins."  Amongst other completely wacko ideas, Adams claims that:
So this termination is actually a big deal.  The account's entire library of videos was deleted, meaning that if someone linked or embedded one of them on a secondary site or blog, they will now show as "This Video Is No Longer Available."

Before you start yelling at me about the First Amendment and free speech, allow me to state for the record that "Free Speech" doesn't mean you have the right to say anything, anywhere, with no consequences.  I can claim the First Amendment protects my right to tell my boss to fuck off, and no court in the land will side with me if I'm fired.  YouTube quite rightly has rules to play by, and if someone's account violates those rules, it is entirely within their purview to delete their videos. 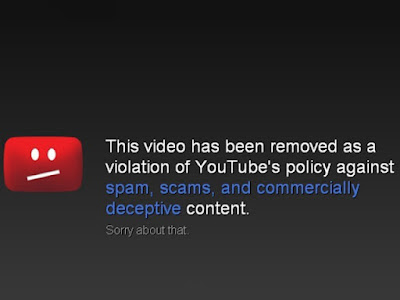 Adams, predictably, had a complete meltdown, just like he did when Google took steps to stop him from gaming their search engine optimization software to propel his links to the top of search pages.  He, of course, claimed that the action taken was not because he violated one of Google's policies; this was a targeted attack against his message.  And now YouTube has joined the ranks of the persecutors.  Adams said:

Over the last two weeks, YouTube has been on a censorship rampage that’s apparently run by the SPLC, a radical left-wing hate group that despises Christianity, the Second Amendment and patriots in particular.  Hundreds of prominent conservative video channels have been targeted for termination by YouTube, leading many independent media leaders like myself to call for government regulation of YouTube to protect free speech and end the tyranny.

The SPLC, allow me to point out, is the Southern Poverty Law Center, which monitors hate groups, hate crimes, and extremists in the United States, and only gets involved with YouTube if there's a video that promotes ethnic, racial, or religious hatred.  So targeting the SPLC is nothing short of bizarre.

But the long and short of it is, YouTube is a privately owned, for-profit company, and there is no reason in the world that it should have to host Mike Adams's nutcake screeds if the Board of Directors says it doesn't want to, any more than I should have to allow Adams to do a guest post on Skeptophilia because he claims it's his right under the First Amendment.  So in fact, what he's doing right now is whining because he flouted the rules and got caught at it, and is trying to deflect the blame on the liberals and tech giants and (for fuck's sake) the SPLC.


Myself, I have to admit my reaction to this was: ha ha ha ha ha ha ha ha ha ha.  Much as I advocate for the right of free expression and the principle of caveat emptor, it really would be a better world if we had fewer people making crazy and potentially dangerous claims.  So I'm afraid I can't work up much sympathy for Adams.  In fact, what I really wish is that he would take Alex Jones, Sean Hannity, Ann Coulter, and Gwyneth Paltrow along with him.  That would really be some schadenfreude I could get behind.
Posted by Gordon Bonnet at 2:12 AM