Odd eulogies for a great mind

The Earth lost one of its most brilliant minds last week -- British physicist Stephen Hawking, who expanded our understanding of everything from black holes to the Big Bang.

Hawking's death also attracted attention for another reason, which is that he was an outspoken atheist.  In an interview in 2014, Hawking said:


Before we understand science, it is natural to believe that God created the universe.  But now science offers a more convincing explanation. What I meant by "we would know the mind of God" is, we would know everything that God would know, if there were a God, which there isn’t.  I’m an atheist.

As far as death and the afterlife, he was equally unequivocal, something made more interesting still because of his fight against the depredations of amyotrophic lateral sclerosis.  You'd think that if anyone would have engaged in some wishful thinking about the possibility of life after death, it would be a man who was confronted daily with evidence of his own mortality.  But Hawking said, "There is no heaven or afterlife for broken-down computers; that is a fairy story for people afraid of the dark." 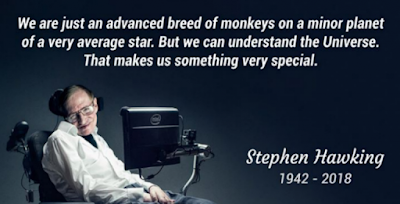 And of course, the spokespeople for the God of Love and Mercy didn't even wait until the poor man's body was cool to start crowing about how he was currently roasting in hell.  I must admit that two people who are frequent fliers here at Skeptophilia -- Franklin Graham and Ken Ham -- at least had fairly measured and compassionate responses.  Graham, who is best known for his fiery vitriol and anti LGBTQ stance -- said the following:


I wish I could have asked Mr. Hawking who he thought designed the human brain.  The designers at HP, Apple, Dell, or Lenovo have developed amazing computers, but none come even close to the amazing capabilities of the human mind.  Who do you think designed the human brain?  The Master Designer — God Himself.  I wish Stephen Hawking could have seen the simple truth that God is the Creator of the universe he loved to study and everything in it.


A reminder death comes to all. Doesn't matter how famous or not in this world, all will die and face the God who created us and stepped into history in the person of Jesus Christ, to die and be raised to offer a free gift of salvation to all who receive it.

Which, considering some of their statements on other issues, is actually pretty mild.

But the response from other quarters wasn't even that measured.  The site Catholics Online claimed that Hawking had experience a deathbed conversion, similar to the (also false) claims made about Christopher Hitchens when he died in 2016:


Before he died, Stiph [sic] Hawkins [sic] who did not believe in God requested to visit the Vatican.  “Now l believe” was the only statement he made after the Holy Father blessed him.

Well, that may have happened to "Stiph Hawkins," but it sure as hell didn't happen to Stephen Hawking.

But that was far from the most outlandish claim made upon Professor Hawking's death.  That award has to go to Mike Shoesmith, of the conservative Christian PNN Network, who said that Hawking's amazing beat-the-odds lifespan after his ALS diagnosis was because Satan wanted to keep him alive long enough to fight against the message of Billy Graham:


So, in 1942, that is when Billy Graham’s ministry really takes off, and who do you think was born in 1942?  Stephen Hawking.  Stephen Hawking comes from a long line of atheists — his father and all these people — so I believe the devil said, "OK, this guy was just born and I’m going to use this guy. This guy is already primed to accept my message that there is no God. He is already primed for it, he is going to be awash, immersed in atheism all his years as a child, I’m going to take over this guy’s life."

I believe Stephen Hawking was kept alive by demonic forces.  I believe that it was the demonic realm that kept this man alive as a virtual vegetable his entire life just so he could spread this message that there is no God.

Then when Billy Graham died a couple of weeks ago, I guess Satan just said, "Okay, I'm done with you," and let Hawking die as well.

Me, I'm kind of appalled that there are people who would try to score points off any person's death, much less an august personage such as Professor Hawking.  The whole thing gives lie to their claim of being on the moral high ground by comparison to us ungodly heathen slobs.  Be that as it may, I'd rather remember Stephen Hawking for his brilliance, his contributions to our understanding of the universe, his modesty, and his sense of humor.  As evidence of the last-mentioned, I direct you to this compilation of Hawking's amazing comedic chops, and encourage you to put aside all the people who are using his life and death for their own purposes and have a good laugh with one of the greatest minds humanity has ever produced.  I suspect that Hawking would really prefer our sending him on his way with a smile rather than a eulogy of pious platitudes in any case.
Posted by Gordon Bonnet at 2:12 AM