As part of the ongoing effort by my readers to drive me completely insane, today I have two links that were sent to me with a "You Gotta See This" message.  And far be it from me not to want to share the experience with all of you.

I'll just assume you're showering me with thanks right now, shall I?

The first has the encouraging title Love Has Won, which sounds awfully nice although you'd think if love really had won, I'd have heard something about it.  When I read the news, it seems to be as much of a raging shitstorm as ever.  Be that as it may, the site is pretty optimistic about everything.  It opens with a bang:


With the arrival and crystallization of the God and Goddess energies within Gaia’s new energy grid the depolarization process begins!  The old eon worked on polarization of the masses and of the individual.  The new eon works very differently!

It may come as no surprise that humanity has become highly polarized these last few years.  This polarization was the manifestation of the last of the old eon energetics.  The process that is now underway neutralizes all polarization completely and leaves the masses and individuals squarely in the same life circumstances but without the polarization or sense of urgency previously experienced.

I guess the problem here is that I'm starting from the admittedly silly assumption that when people use scientific terms, they actually understand what they mean.  Things like "depolarization," "crystallization," "energy," and so on.  I did read the entire piece to try to determine what the author was trying to tell us, and what I got out of it was that if you can depolarize your energetics, you will take part in ascension, an event that will make the Earth's aura really pretty. 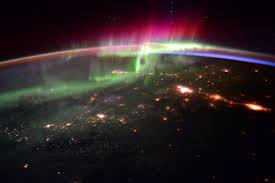 The aurora.  Not aura.  Which are not the same thing.  [Image courtesy of NASA]

So you don't have to read the whole thing, which I wouldn't suggest in any case unless you have a bottle of scotch handy, let me cut to the chase and let you take a look at the last paragraph:


Energetic activity will remain at the level of its origin unless transmuted consciously to other levels.  To creatively manifest something physically, the process must be driven by physical life force energy.  This means either hard physical work or magical tantric practices.  The astral levels have segregated and the beginning of all great cycles activates the lowest level first, that of life force energy and magic.  That is where we now find ourselves, in a completely magical world.  All the upper astral levels are energetically dead in regards to manifesting things physically.  All other energies will remain in their respective levels unless consciously transmuted.

So I guess that clears that up.

Then we have the site Earth Keeper: Energy Activation of the New Planet Earth, a somewhat flashier site that starts out by telling us about an event to be held in the third week of September in Little Rock, Arkansas, that is called, I shit you not, "ArkLantis."  It is, we are told, a "Crystal Vortex Star-Gate Event," which sounds pretty impressive.  I have to share the description of the event with you, because putting it into my own words just wouldn't convey the full effect, particularly since I wouldn't capitalize every other word:


Join the Earth-Keeper Family in the Incredible Transformational Energy of the Sacred Ark Crystal Vortex ...  The Epi-Centre of the Crystalline Shift.  Arkansas is a Geological Wonder, Containing the Largest Singular Strata of Quartz Crystal on the Planet. Beginning in Little Rock, The Amazing Crystal Deposits Extend 177 miles SW from Little Rock to Hot Springs National Park & onward to Talimena Ridge.  Within the Astonishing Crystals are Rare World Renowned Deposits of Magnetite (at Magnet Cove), the Toltec Mounds Pyramids, Renowned Natural Thermal Healing Springs, Aquifers, Mystical Massive Caverns, Sacred Mountains, Crystal Clear Rivers, Holy Lakes, Amethyst, and an Active Diamond Mine ( Crater of Diamonds State Park).  Arkansas was A Crystal Colony of the Benevolent Law of One Atlanteans.  There are Utterly Astonishing, Enormous Crystals Beneath Arkansas the Size of Buildings.  Three Temple Crystals Were Placed in the Underground Caverns Before the Final Sinking of Atlantis.  The Energy Has Awakened & The Crystal Vortex is Now the Most Potent Crystalline Energy Field on Earth ! Come Experience this Amazingly Sacred Vortexial Land of Ancient Atlantis, Spirit, Multidimensionality & Vision.

I have a good many friends in Arkansas -- it's the home of Oghma Creative Media, which publishes my books -- and I bet they'll be as gobsmacked as I was to learn that what is now Arkansas was once part of Atlantis.

Although, isn't the whole point that Atlantis sunk to the bottom of the ocean?  Arkansas, last time I went there, was dry land.  So that's kind of odd.  Maybe they were kept afloat by the Crystalline Shifted Sacred Vortexial Transformational Energy or something.

You can see how that could happen. 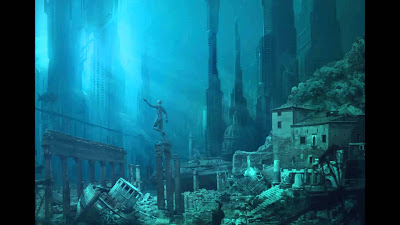 Anyhow, many thanks to my loyal readers, who with the best of intentions keep making me do near-fatal faceplants directly into my keyboard.  Me, I wondering how to recover from the aftereffects of reading Love Has Won and Earth Keeper in preparation for writing this post.  I guess my only reasonable option is to have a second cup of coffee, since it's still a little early for a double scotch.
Posted by Gordon Bonnet at 2:09 AM