I honestly don't understand how there are people who don't find science exciting.

Yes, I know that identifies me as a science nerd.  No, I don't care.  I just can't fathom how you wouldn't find it fascinating to comprehend a little more about the way the universe works.

This comes up because of an article by Jake Parks I ran into a couple of days ago over at the site Astronomy, called, "Star is Confirmed Single and Ready to Test Einstein’s Theory."  Despite the sound of the title, this has nothing to do with a nice-looking young Hollywood actor who is ready to go out on the dating circuit.  It's about a confirmation of a corollary of Einstein's General Theory of Relativity -- the idea of gravitational redshift.

The idea here is that the presence of a massive object actually warps the fabric of space -- stretches it in rather the same fashion that a bowling ball would depress the surface of a trampoline.  This, in fact, is what gravity really is; the fact that the Earth travels in an elliptical orbit around the Sun is because the Sun's enormous mass bends space, and the Earth travels along the lines of that curvature. (Picture someone rolling a marble toward the bowling-ball-on-a-trampoline I referenced earlier for a two-dimensional analog.) 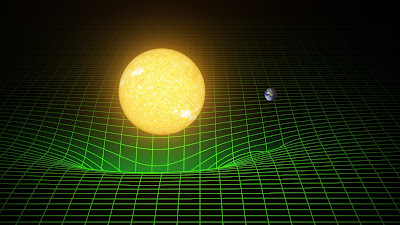 Where it gets really interesting is that if you have a light-emitting object travel past something that's highly massive, not only would its path change, but it would bend the light being emitted.  Because the space itself is stretched by the presence of the more massive object, the light would be stretched out -- red-shifted -- as it tries to "climb out of the gravity well."

It's never been observed before -- but astronomers have a good chance of observing it in a few months.  A star called S0-2 is going to be making a pass in front of Sagittarius A, the supermassive black hole at our galaxy's center.  As the star moves between us and the black hole, its light should be significantly redshifted -- a finding that would be a major win for Einstein's theory.

"It will be the first measurement of its kind,” said Tuan Do, deputy director of the Galactic Center Group, who co-authored the study.  "Gravity is the least well-tested of the forces of nature.  Einstein’s theory has passed all other tests with flying colors so far, so if there are deviations measured, it would certainly raise lots of questions about the nature of gravity!"

It was recently proven that S0-2 is not a binary (double) star system -- an important bit of information, as if it had been, it would have significantly complicated the possibility of observing the predicted redshift.

"We have been waiting 16 years for this," said Devin Chu, study co-author and graduate student of astronomy at UCLA.  "We are anxious to see how the star will behave under the black hole’s violent pull.  Will S0-2 follow Einstein’s theory?  Or will the star defy our current laws of physics?  We will soon find out!"

Can't you just hear the excitement in his voice?

I can already hear the naysayers as well, though -- how much money is being put into this research?  What useful outcome will it generate?  I don't know the answer to the first question, and I don't much care; but the answer to the second is, "we don't know yet -- and that's the point."

There are hundreds of discoveries that were made by scientists doing basic research -- what might appear to the layperson as simple messing around with something that interested them.  Here are a few of my favorites:
And so on and so forth.  My point is, we need to be doing basic research.  No, the gravitational redshift experiment might not ever amount to anything practical.  But then again, it might.  The point is, we don't know, and if we limit research to things we already expect are going to be useful, it's going to hobble science -- and rob us of the next generation of serendipitous discoveries.

Besides, there's a value simply in knowing.  We are at a point in our civilization where we have the technology and insight to unravel the deep secrets of the universe, and it's worthwhile doing that for its own sake.  The inspiration and joy we get from understanding one more bit of the world we live in is a worthwhile end in and of itself.  As the eminent astronomer Carl Sagan put it:  "Somewhere, something incredible is waiting to be known."
Posted by Gordon Bonnet at 2:05 AM