Start your day with kindness

When I was in my twenties, my parents got into watching the television series Cops.

Me, I never could see the draw.  The plot was the same every time:
I like my entertainment to have a little more in the way of unexpected twists.  But that's just me, apparently.

Anyhow, there came a point that Cops went into syndication, and on one station, it played every single night.  And my parents had it on.

At this point, I should explain that my parents, especially my mother, had a tremendous suspicion of the unknown.  If there's a word that means the opposite of "adventurous," that was my mom.  As an example, when I made my first trip overseas -- a one-month cross-country hike of England, from Blackpool to Whitby -- her last words to me on the night before I left were, "Don't trust anyone."

I know about correlation not implying causation and all, but I can't help but wonder how much her view of the world as a scary, unsafe place was reinforced by watching a television show that every single night showed the worst of humanity.  I'm guessing the causation probably goes both ways -- she gravitated toward the series because she already had that attitude, and the series acted to reinforce the attitude, and round and round it went. 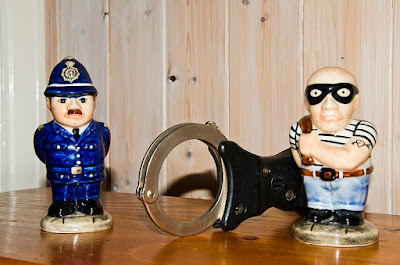 Whatever the cause, her lack of comprehension of how I could possibly want to travel to Dangerous Foreign Countries Inhabited By Dangerous Foreign People (like the English, for fuck's sake) only got worse as she got older.  When we took our first trip to Ecuador back in 2001, not only going to (gasp!) South America, but (1) doing so three months after 9/11, and (2) bringing along both of our sons, at that point ages 11 and 13, she was aghast, but at least knew by then that it'd be futile to try to talk me out of it.

This all comes up because of a study published a couple of months ago in the Journal of Applied Psychology called, "Rude Color Glasses: The Contaminating Effects of Witnessed Morning Rudeness on Perceptions and Behaviors Throughout the Workday."  While on first glance, the study may not seem to have much to do with an overall perception of the world as dangerous, the two are connected.  The study shows pretty clearly that the behavior we are exposed to (or expose ourselves to) colors how we see everything -- and that the effect can last far beyond the time immediately after the incident in question.  The authors write:


Using an experimental experience sampling design, we investigate how witnessing morning rudeness influences workers’ subsequent perceptions and behaviors throughout the workday.  We posit that a single exposure to rudeness in the morning can contaminate employees’ perceptions of subsequent social interactions leading them to perceive greater workplace rudeness throughout their workday.  We expect that these contaminated perceptions will have important ramifications for employees’ work behaviors.  In a 10-day study of 81 professional and managerial employees, we find that witnessed morning rudeness leads to greater perceptions of workplace rudeness throughout the workday and that those perceptions, in turn, predict lower task performance and goal progress and greater interaction avoidance and psychological withdrawal.

I can vouch for this from my own personal experience.  When I get to school and the first thing I'm faced with is an obnoxious email or a surly student -- both, fortunately, uncommon occurrences -- I'm set up to be grouchy and irritable for the rest of the day.

However.  I've found that the reverse is also true.  When I'm in a sour mood and something unexpectedly good happens, my frame of mind can flip just as quickly.  All of which is yet another indication that we should strive to be as polite and kind as we can; you never know whose life you may be touching.

And I think the same thing applies more globally to the people, media, and general context we're exposed to every day.  If you allow yourself to be constantly bombarded by rudeness, negativity, and bad news, it's kind of inevitable that you'll eventually get swallowed up by it.

I'm not trying to turn us into some modern-day version of Dr. Pangloss from Voltaire's Candide -- smiling blandly and chanting, "Everything happens for the best in the best of all possible worlds."  We shouldn't blind ourselves to the ills of society.  But it's equally important to keep in mind that the vast majority of people are kind, compassionate, and friendly.  You certainly aren't going to do yourself or the world any favors by allowing yourself to be driven to the conclusion that humanity is irredeemably evil.