Apparently, Australia being nonexistent and people selling homeopathic black holes weren't enough, so a friend and loyal reader of Skeptophilia sent me a link to a site called "iTOVi," which sells "nutritional scanners."

The website tells us that the scanner is designed to "provide a list of top oils and supplements your body has a response to."  How, you might ask?  Well, here's their explanation:


Our portable nutrition scanner allows you and your clients to receive personalized product responses at any time of day!  How? The  iTOVi scanner uses innovative and institutionally recognized technology to measure the body’s response to electronic frequencies.  The scanner records the body’s reaction to these frequencies and matches the user with products that have complimentary frequencies.

So we're on thin ice already, but it gets a lot thinner.  I went to the page on "technology" -- call me a doubter, but I always want to know how things work.  And I wasn't disappointed.  We're told that everything, biological and non-biological, vibrates at a particular frequency, including "supplements and essential oils."  The machine figures out your vibration with a technique that should sound vaguely familiar:


During an iTOVi scan the device passes small electrical currents through the skin to measure the body’s resistance to frequencies, each of which is the natural energy signature of various supplements and oils.  The passing of electrical frequencies induces a measurable response from the body which is then recorded and shown in the iTOVi report.

If you're thinking, "but... isn't that how a polygraph machine works?", you're spot-on.  Polygraph machines -- which, to be up front, are of dubious use in telling whether people are lying -- measure small changes in skin conductivity, which occur primarily because of the amount of sweat a person has on their skin.  Sweat, being weakly saline, is quite a good conductor; and since the theory is that a person would sweat more under conditions of emotional stress (such as lying), changes in skin conductivity could give interrogators a clue about someone's veracity. 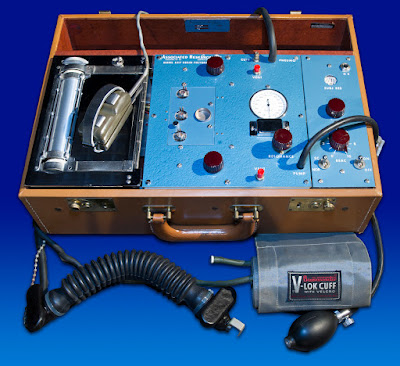 A polygraph machine [Image courtesy of the Wikimedia Commons]

You may have noticed that nothing in the preceding paragraph mentions "frequencies."  That doesn't stop the iTOVi people, who claim that these conductivity changes are a clue to the body's "frequency," and they derive one from the other by means of an unspecified algorithm.  We're never given any specifics -- not even the number of Hertz we all should be shooting for.

Most of the places that blather on about "frequencies" (and "energies" and "vibrations" and "resonance") seem to think that the higher the frequency the better.  I did some digging and found the website "Vibrational Frequency 101," which I read, at great cost to the cells in my prefrontal cortex, which were screaming in agony by paragraph three.  It features passages like the following:


First off, we are not just our physical body {aka matter}. We are all made up of energy – all matter is – and bound together by an energy field. We’re talking atoms, protons, and neutrons…  This is science, people!

The energy we’re made up of connects us to all living things and the universe.  When you really break it down, we are all just balls of energy walking the planet.

Our energy is blocked when we experience negativity, fear, or you guessed it… unhealthy substances.  Think about it.  When you consume really unhealthy food, alcohol, or drugs, doesn’t your energy feel low, or dull or blocked?  Low vibrations mean a dampened energy field. It also means a disconnection to other things, the universe, and ourselves...  Plus, a constant negative state can lead to sickness and disease in the body.

Look.  You can say "this is science, people!" and "institutionally recognized technology" all day long, but until you can show me, using an oscilloscope, that kale is vibrating at 14,500 Hertz and KFC is vibrating at 7 Hertz, I'm calling bullshit.  Besides, if our food really is vibrating, shouldn't we be able to hear it?  You know, like kale emits this high-pitched whistle, and KFC a low, sad buzz, or something?  But despite listening carefully to my bowl of oatmeal this morning, I heard nothing but my wife sighing in resignation at her husband doing yet another ridiculous thing in the name of scientific research, and my dog wagging his tail, the latter presumably figuring that if I was doing something weird with my food, maybe it meant he was going to get some.

In short: the entire claim is nonsense.  You, and your organs, do have a natural (or resonant) frequency, because everything with mass does.  (Think of the natural swing rate of a kid on a swingset -- it's hard-to-impossible to make the swing oscillate at any other frequency.)  But all this means is that if your body is shaken at that frequency, it'll make (for example) your spleen vibrate, which sounds painful.  It has nothing to do with "feelings" or "negativity" or, for fuck's sake, "essential oils."

And, in fact, if you really believe that higher frequencies are better for you, let's run this experiment.  You listen to a piccolo playing a high D at full volume for an hour, and I'll listen to a cello playing a low note.  Let's see who comes away from the experience with a headache.

So about iTOVi: save your money.  The whole claim is nonsense, as you might figure out if you see the notorious disclaimer on their page, "This device is not meant to treat, cure, or diagnose any illness, nor should it be construed as medical advice."  Which, as always, is a good indicator that what it's proposing is horseshit.