There's a fundamental problem when elected officials are charged with creating laws and policies surrounding issues that they simply do not understand.

This is where we currently stand with GMOs.  GMOs, or "genetically-modified organisms," get a great deal of negative press from the all-natural folks, who have nicknamed GMO crops "frankenfoods," claiming that they cause everything from allergies to autism.  Of course, that by itself is ridiculous; modifying genes isn't going to result in the same risks and benefits every time you do it, because (and it pains me to have to point this out) different genes do different things.  A papaya that has been genetically modified to be resistant to ringspot virus is not going to resemble in any way a strain of corn that produces the caterpillar-killing BT toxin.  The only commonality is that both of them were the result of humans tinkering with DNA.

Another problem, of course, is that we've been tinkering with DNA for a long, long time, which makes the USDA's definition of GMO sound a little ridiculous.  The USDA says that genetic modification is "The production of heritable improvements in plants or animals for specific uses, via either genetic engineering or other more traditional methods."  It's the "more traditional methods" that's a little funny; because by that definition, not only is virtually every food you eat a GMO (unless you're subsisting on wild nuts, berries, and roots), so is your pet dog.  Selective breeding -- which has been done for millennia -- is one of those "more traditional methods" the USDA is referring to, as evidenced by the fact that typical store-variety tomatoes, corn, apples, broccoli, oranges, and soybeans (sorry, tofu-eaters) occur nowhere in the wild.  Nor does this guy: 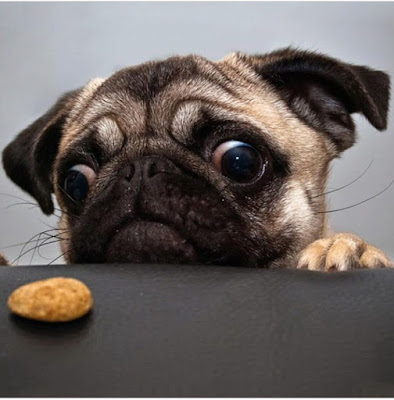 Trust me, this is not a product of natural selection.  [Image courtesy of the Wikimedia Commons]

So we've got a problem right at the outset, which is that a scientifically-correct definition of GMO includes genetic modification by artificial selection, which means that pretty much everything in the grocery store should be so labeled; and if you include only recently-developed genetically engineered crops, you're throwing together all sorts of products whose only similarity is how they were created.

That's not even the extent of the problem, however.  At the end of last month, Secretary of Agriculture Sonny Perdue announced that the USDA would not label as GMO anything created using the CRISPR/Cas9 gene editing protocol.  The press release gave a rather bizarre justification for this decision:


Under its biotechnology regulations, USDA does not regulate or have any plans to regulate plants that could otherwise have been developed through traditional breeding techniques as long as they are not plant pests or developed using plant pests.  This includes a set of new techniques that are increasingly being used by plant breeders to produce new plant varieties that are indistinguishable from those developed through traditional breeding methods.  The newest of these methods, such as genome editing, expand traditional plant breeding tools because they can introduce new plant traits more quickly and precisely, potentially saving years or even decades in bringing needed new varieties to farmers.

Did you catch that?  The USDA won't regulate crops that "could otherwise have been developed" by traditional techniques, and ones that are "indistinguishable from those developed through traditional breeding methods."  Which, actually, is pretty much every GMO ever created.  How do you figure out whether a particular strain "could otherwise have been developed" or not?  So we've gone from labeling every damn product in the store to labeling nothing at all.

Now, don't get me wrong.  I think CRISPR/Cas9 has phenomenal potential, not only for developing disease-resistant strains of crops that are currently seriously threatened (including, unfortunately, chocolate, oranges, and bananas), but in curing genetic diseases in humans.  And as I said before, it's scientifically inaccurate to regulate -- or even label -- all genetically modified food products the same way, as if the means by which they were produced is the only relevant issue.  My research into the topic has demonstrated to my own satisfaction that the vast majority of GMO foods are completely safe for human consumption, and a great deal of the fear-talk about them comes from people who don't have a very good understanding of what genetic modification is, or how it works.

As Tirzah Duren put it over at Real Clear Science:


Mandatory labeling of GMOs makes no sense both from the technical side and from the practical.  The definition of GMOs is misunderstood even by the organization who made them.  This lack of understanding translates into a sloppy policy that does little to inform consumers.  Examining the regulation of GMOs highlights a truth, which is the government cannot regulate what it does not understand...  [T]he major shortcoming on GMO regulation... is that the people making the rules do not understand what they are making rules about.

And neither, unfortunately, do many of the consumers.  I'm reminded of the situation a few years ago where freeze-resistant strawberries were developed by splicing in a gene for a natural antifreeze protein produced by certain species of fish, and people flipped out, because they believed of one or more of the following:
It also gave rise to foolishness like this: 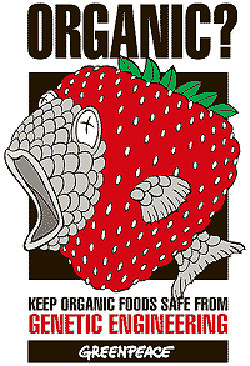 Note that saying that all GMOs are safe is just as ridiculous to say that all of them are harmful.  Each one has to be evaluated and tested on its own merits and risks.  But this kind of alarmism, fear-talk, and elevation of the naturalistic fallacy into the law of the land is simply ignorant, not to mention encouraging us to think with our emotions rather than with our brains.